Housing Authority looks at banning smoking from its public housing 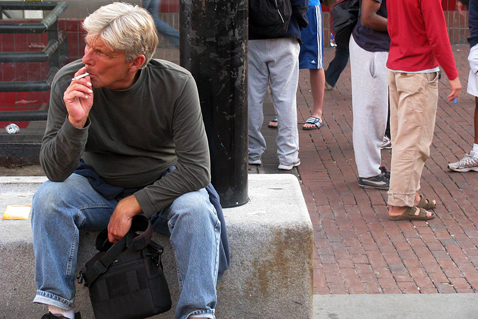 Housing Authority looks at banning smoking from its public housing

A smoke lights up in Harvard Square. A proposed ban on smoking in public housing could push more smokers to other locations. (Photo: UglyAgnes)

The Cambridge Housing Authority took the first step toward banning smoking in all public housing developments, voting Wednesday to subject the policy to two months of public comment starting June 1.

The 3-1 vote was a rare split that illustrated the touchy nature of regulating private behavior and dealing with addiction. Two board members expressed misgivings about the scope of the proposal but voted for it, and the tenant representative on the board, Victoria Bergland, voted no. She said she was concerned about the possibility of eviction for smokers and language encouraging tenants to report violations by their neighbors. That could “set neighbor against neighbor” and lead to false accusations stemming from personal feuds, she said.

Almost 80 percent of Cambridge tenants in a survey favored living “in a smoke-free environment,” though they supported a less sweeping ban than the authority wants to adopt. The CHA policy would prohibit smoking for more than 2,500 low-income public housing tenants not only in all indoor areas but throughout the grounds of each development. If approved, tenants in some buildings would have to walk the equivalent of several blocks to smoke.

A no-smoking policy in Boston public housing was implemented fully in October, but it allows individual developments to set their own outdoor exclusion zones. An increasing number of communities across the country are banning smoking in public housing – more than 250 as of January, the Centers for Disease Control and Prevention reported. In surveys, a majority of tenants want to end smoking in their developments, the CDC said.

Gloria Leipzig, the authority’s director of operations, told board members that the push to ban smoking “began with residents.” She said her office was getting calls “from many residents with health concerns exacerbated by smoking.” But the authority couldn’t help them, she said.

In November, staff members began looking at smoking bans in effect at 20 other public housing systems. They developed a survey and mailed it to tenants in January. About 21 percent returned the questionnaire, which officials called unusually high.

After presenting the results to interested tenants, the authority in March set up a committee of four residents and two managers to develop the policy. The result was the measure adopted on Wednesday. The schedule calls for the board to vote on a final policy in August after public meetings at nine developments to solicit comments. No-smoking rules would go into effect in January, but individual developments could have a ban as early as November if enough residents vote for it.

The proposal would cover guests as well as tenants, with tenants held responsible if the guest smokes. Violators would be warned the first time; they could be fined $100 and could face eviction on the third and subsequent violations.

The scope and the penalties disturbed board member Gerald J. Clark, a law professor and tenant lawyer; and chairman James G. Stockard Jr., an affordable housing consultant. Stockard suggested other sanctions, such as refraining from a penalty if the violator enrolls in a stop-smoking program. “I love the idea of a smoke-free environment,” he said. “I don’t love the idea of evicting a grandmother who has lived there for 20 years because she can’t get her grandson to stop smoking.”

Clark said he preferred a policy that allowed residents to smoke somewhere on CHA property. Banning smoking anywhere within a development “is too absolute,” he said. “People have lifelong habits and they can’t stop.”

One side-effect of the proposed ban would restrict tenants with a doctor’s prescription for marijuana, which is now legal in Massachusetts. Those public housing tenants wouldn’t be allowed to smoke the marijuana inside their apartments or on CHA property, but they could put the substance in food or ingest it some other way besides smoking, Leipzig said.

Despite support from tenants, no-smoking policies are controversial. Opponents question scientific evidence of harm from secondhand smoke despite studies supporting that thesis in the years since scientists first identified the health risks to smokers. Opponents also say regulating a person’s behavior inside his own home is unacceptably intrusive.

Two men holding signs reading: “CHA, don’t evict smokers” paraded outside the authority’s new office on Western Avenue before the Wednesday meeting. Neither would be immediately affected by the proposed ban; they said they opposed it as nonscientific, coercive and intrusive.

Paul Neff, a Section 8 tenant who rents an apartment from a private landlord who has not banned smoking, said current disincentives to smoking are “working well” to reduce the number of smokers, so new prohibitions aren’t needed. Neff said he began smoking only recently.

Stephen Helfer, a smoker who owns a condo and is leading a campaign to stop smoking bans in housing, said several other public housing tenants “are concerned” about the potential CHA policy. “Will they want to look in your refrigerator? It’s a huge precedent,” Helfer said.

The Alliance of Cambridge Tenants, which represents public housing and Section 8 tenants, has not taken a yes-or-no position on the proposal but did post a statement from Helfer on its website.