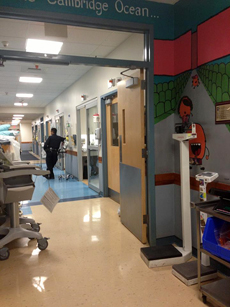 Financial trouble at Cambridge Health Alliance led to a proposal to cut beds and combine units dedicated to psychiatric services for children.

Cambridge Health Alliance’s board of trustees, the governing body of the health care system, did not vote on a controversial plan to cut psychiatric services for children under 8 and discussed the proposal only in private session, a hospital spokesman acknowledged.

Spokesman David Cecere also declined to provide minutes of the March 19 meeting in which he said the trustees “reviewed and discussed” the cuts, which have sparked extensive criticism from local officials, mental health advocates and workers. The City Council voted to oppose the plan; on Tuesday state officials passed a $2 million budget amendment avoiding the cuts for a year.

“As the discussion occurred in executive session and was strategic in nature, the minutes are exempt from disclosure at this time,” Cecere said in an e-mailed response to questions. He also said the decision to cut 11 of  27 beds “did not require a formal vote.” Alliance managers “incorporated trustee feedback and concern in developing [the] plan,” Cecere said. That “feedback and concern” would presumably be reported in the withheld minutes.

Last month the health care system, a major provider of psychiatric services to children and adults, said it would close 11 beds for children from 3 to 7 and would consolidate the child and adolescent unit, leaving 16 beds for patients from 8 to 18.  The Alliance, which is contending with repeated financial losses, said it couldn’t afford to keep footing the substantial cost of serving young children while reimbursements remain low.

Shortly after, the Alliance changed the cutoff age to 6. That did not mollify critics who attacked the plan at a May 8 public hearing held by the state health department. Last week the state ruled that the cuts would eliminate an “essential service” and ordered the hospital system to come up with alternatives to provide care. The state has no authority to prevent the cuts or reject the alternative plan.

The Alliance is part of Cambridge city government and the city manager appoints the 18 trustees on the board. Two city officials, Assistant City Manager of Human Services Ellen Semonoff and  and Finance Director Louis DePasquale, sit on the panel, and Semonoff is chairwoman.  The Alliance has other close ties to Cambridge; the system operates the city’s Public Health Department in return for $10 million a year in city funds; the city floated bonds in the mid-1990s to finance an expansion, and Chief Executive Patrick Wardell is on the city payroll.

Told about the lack of a vote and the private discussion, City Councillor Minka vanBeuzekom said: “These decisions should be made in public. After all, this institution is supposed to be operating in the interest of all of us.” Aside from that, vanBeuzekom said, she didn’t know enough about the process to comment.

Councillor and state Rep. Marjorie Decker, who heads the Community and Public Health Committee and who led opposition to the proposal, declined to comment. Councillors Timothy Toomey, Craig Kelley, David Maher, Denise Simmons, Kenneth Reeves and Mayor Henrietta Davis didn’t return messages. Councillor Leland Cheung, asked to comment, said he would call back but did not.

David Schildmeier, spokesman for the Massachusetts Nurses Association, which represents workers at the psychiatric unit, said the opposition of councillors to the plan “illustrates how inappropriate the process [of deciding to cut the beds] was.”

“A decision that important needs to be handled openly and transparently, not only by the  board of trustees itself but by the community, “Schildmeier said.