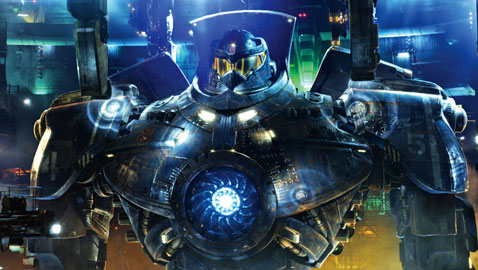 With Guillermo del Toro’s 3-D visual artistry and the care he’s imbued into every frame of this spectacular homage to the Japanese rubber-suit movies of the ’60s and ‘70s – not to mention a ready and salivating fanboy base – “Pacific Rim” is a $185 million monster mayhem royale that has a fighting chance of winning at the box office and in the hearts of moviegoers. 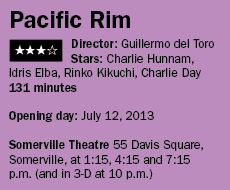 Del Toro has always been an intricate craftsman. The signs were evident in his quirky first outing, “Cronos” and best showcased in his Spanish Civil War-era films “Pan’s Labyrinth” and “The Devil’s Backbone.” His ventures into larger, more mainstream projects such as “Mimic” never took flight or, like “Hellboy” and its sequel, never forged an audience the way less articulate hero fare such as “The Avengers” have – truly the audience’s loss. But here the Mexican-born auteur with a penchant for horror and sci-fi seems eager to show prospective converts that he belongs, and he takes his shot in a very big way.

The film begins in the not too distant future as our planet is besieged by giant dinosaur-like blob-sters known as kaiju (Japanese for “strange beast”) who plod, stomp and destroy cities with all the aimless glee that Godzilla and Mothra employed in the destruction of Tokyo. After taking down the first few kaiju with conventional military weapons and high human casualties, a world-uniting program is launched to build massive robots called Jaegers (German for hunters) to battle the beasties in densely settled locales. The benefit of such archaic iron-fist-to-claw combat would seemingly be to minimize human toll, but the real and more important matter at hand is the requisite setup for del Toro’s brilliantly choreographed go-bot vs. monster death matches.

There’s a lot behind the premise, such as the fact the kaiju come from a fissure in the middle of the Pacific and this is not their first go-round, but Invasion 2.0 if you will. The beings driving the kaiju tried this before millions of year ago with the dinosaurs. Their goal? World domination and all our valuable resources – you know, the kind of thing that drove “Man of Steel,” the aliens in “War of the Worlds” and to a less but far darker extent, the machines in the “Terminator” and “Matrix” series. All these themes of exploitation and genocide incidentally are pointed right back at us (looking in the mirror can be ugly) and if it’s not that, it’s that man’s polluting and abuse of the environment or his need for nuclear proliferation has ultimately boomeranged and unleashed the transmogrified behemoth sitting on the doorstep – see “Godzilla” or “The Host” (the fantastic Korean import, not the more recent nonsense helmed by the once promising Andrew Niccol).

The Jaegers, which look like Hancock-tower-sized “Iron Man” suits, are driven by pilots tucked away in the skull cavity who mime walking and fighting actions much in the same way one does with a Wii, except the pilots wear suits that tap into their neurological systems and forge a “drift” with their co-pilots and machine. It’s pretty much the same kind of neural net mumbo-jumbo that drove “Avatar,” but here, more personal information (memories and secrets) gets sprayed into the virtual cloud, and with perverse ramifications.

The tighter the drift, the better capability a Jaeger has to kick kaiju ass, so inanities such as “Drift levels near 100 percent” often spill out of the control center. Word to the wise: If you take that type of high-science/low-logic too seriously, del Toro’s delicately woven spell will be broken. Don’t think, just drift. And if you are able to float, what a drift it can be (best enjoyed in IMAX) when the kaiju and Jaeger meet midsea, in shallow port or Asian cityscape for a titanic smackdown.

There’s a smattering of people that matter too; the downtrodden former pilot trying to get back in a Jaeger after his brother was killed by a kaiju (Charlie Hunnam), the stoic commander hiding a terminal condition (Idris Elba, who anchors the film soulfully) and the over-achieving tactician who wants her shot in action (Rinko Kikuchi, so effective in “Babel” but striking an odd chemistry with Hunnam here). The simple, yet overly convoluted plot has the Jaeger program on the verge of obsolescence as the kaiju have become too powerful and mankind has opted to build a “wall of life” to stave off extinction. “World War Z” already illustrated the grim futility of such isolationism.

Comparisons to the “Transformers” series are unavoidable and unfortunate, as Michael Bay’s metal-bashing series was/is driven by glitz, brawn and breasts, whereas del Toro’s vision is a romantic human saga fueled by connection, choice and idealism. The script too by del Toro and Travis Beacham sprinkles in some well-timed comedy, mostly in the form of Charlie Day and Burn Gorman. As the bookish science officers, they have some (not so) bright ideas such as forging a mind meld with a kaiju, and later venturing into the black-market for kaiju organs – where they encounter del Toro regular Ron Perlman as a Yakuza don peddling kaiju poop and livers.

“Pacific Rim” runs hard and fast, but as with any sustained crash-bang contest, fatigue is a factor. The dance of CGI metal and rubber is poetic wonderment and seamless, and the characters and story too have breath and life, but at the end of del Toro’s apocalyptic brush, there’s little that resonates beyond the big bashes at sea.