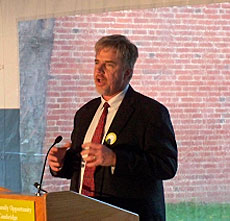 It took more than two years, but the Cambridge Housing Authority and its union maintenance workers have agreed to a three-year contract that gives employees 2 percent raises each year but also gives the authority more authority over staffing and other work rules as it copes with shrinking federal aid.

The wage increases, which include a retroactive hike of 2.5 percent for the year that ended March 31, will cost $1.2 million over the three years with current staffing, but the amount could drop as the workforce shrinks, CHA Deputy Executive Director Michael Johnston said. The work rules changes will save an estimated $2.3 million over the three-year contract, Johnston said.

The previous contract expired March 31, 2011, and the sides had been negotiating since. Last-ditch meetings with a mediator helped reach an agreement, both sides said.

Tim Mahoney, of the Laborers International Union of North America.

Both sides say the threat of federal budget cuts loomed over the negotiations. Sequestration, the mandatory budget reductions that continue to affect virtually every federally funded program – “played a key role,” said Tim Mahoney, business agent of Massachusetts District Council 7 of the Laborers International Union of North America, which represents the authority’s maintenance workers. “Like everyone else, with sequestration it’s a battle.”

For the first time, the contract spells out how the authority could lay off workers if funding falls below a certain level. “Given the economic climate … CHA felt it was imperative that we have some mechanism to void the minimum staffing [requirements] if there are significant funding cuts,” Johnston wrote in a memorandum to CHA commissioners.

Union officials also welcomed the new contract provision, Mahoney said. “We were very worried that without any language they could just let everyone go and call in contractors, and we would end up in court,” he said. The agreement includes “protections for our members,” including requiring the authority to terminate private contractors who supplement the union workers before laying off any union members, Mahoney said.

Although not written into the contract, the union also agreed to let the authority introduce an electronic timekeeping system to replace paper sign-in and sign-out sheets. CHA will probably start by having employees use their thumbprint to register when they use certain equipment, such as forklifts or loaders, for which they get higher pay, Johnston said.

One of the most contentious issues in negotiations was the existing minimum staffing requirement, which forced the authority to employ at least 65 union members and specified their job titles. The authority lost the battle to do away with mandatory staffing levels. But the union agreed to reduce the number to 58 through workers retiring or leaving, without layoffs.

The contract also cuts nighttime maintenance crews from three workers to two, and weekend daytime crews from two workers to one. Asked whether that’s enough to respond to tenants with maintenance problems, Johnston said that if necessary, managers are on call and can summon private contractors.

Overall, “we didn’t get quite what we wanted, but we did do very well,” Johnston said of the contract.

Mahoney agreed, saying, “It was a difficult negotiation.” While neither side was completely happy, “we came out with a deal everyone can live with.”