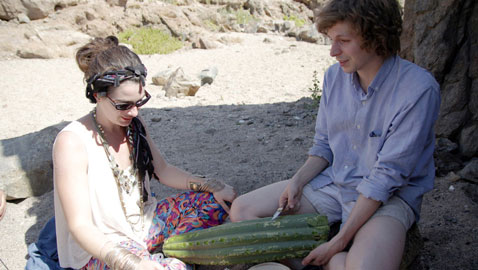 For the second time this summer we find Michael Cera behaving badly in a bathroom. In “This is the End” he was effete and self-centered as he was orally pleasured by two nubile ingénues. Here, in “Crystal Fairy” as an American in Chile on a quest for the ultimate peyote, his Jamie has some flushing complications after a number two. This would be a conundrum for most, but Jamie happens to be stoned and hanging out with a few of his Chilean homies, so what’s a little stink among friends? 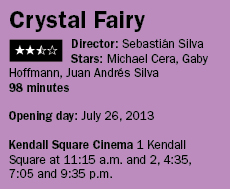 The head trip objective runs the narrative arc fairly straight up, with a few scatological sprinkles and moronic lunacy along the way. In most every scene, Jamie’s shrieking hubris consumes the screen, and it doesn’t help that he can’t speak Spanish. As far as the project’s origins, you can almost see director Sebastián Silva and Cera cooking it up after coming down from an altered state: “Hey man, all we need is an investor or your indie famous mug on Kickstarter.” One-time child star Gaby Hoffman checks in as the title character continually at odds with Jamie. She’s a true free spirit, exemplified resoundingly as she drinks cocktails with the boys in the buff. Jamie, who sees her as an interloper, tells her to cover up, but no one else cares. So goes the movie. She’s tuned in, in touch and can speak the language; he’s just an ugly American. That’s the trip.

“The Act of Killing” isn’t a documentary in the conventional sense – not even. Director Joshua Oppenheimer has described it as a “documentary of the imagination,” which is deftly to the point. What Oppenheimer has done is quite ingenious. The film-within-a-film tautly sheds light on the Indonesian death squads of the 1960s (sanctioned by a nascent government that was given a passive green light by Western powers) without being a chronicle. 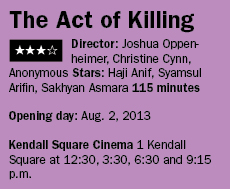 Anwar Congo was a petty hood scalping movie tickets; the power shift made him the leader of a militia operating with autonomy, little accountability and assumed impunity. He killed thousands, mostly by garrote, as he demonstrates grimly for the camera, but Oppenheimer isn’t interested in recreation or testimony; he’s after the soul of a killer and gives Congo a camera to make a movie that encapsulates his legacy.

What Congo comes up with are staged, grand military invasions replete with gun turret-mounted jeeps rolling into a jungle village and surreal nightmare sequences in which he plays the victim. The production values are low and there is plenty of baroque imagery, such as sirenesque women singing alongside a misty waterfall, the ample overuse of studio blood and, in almost every sequence, a chubby former executioner in drag. Oppenheimer intercuts it starkly with some revelations from Congo and TV footage from back when Congo was revered as a national hero. The journey is amazing, but at some point Oppenheimer becomes too much of a bystander and the wonderment becomes inert. Looming questions never get answered, but you still leave with a pit in your stomach and an itch to google Anwar Congo and the whole bloody chapter on the South Pacific isle.