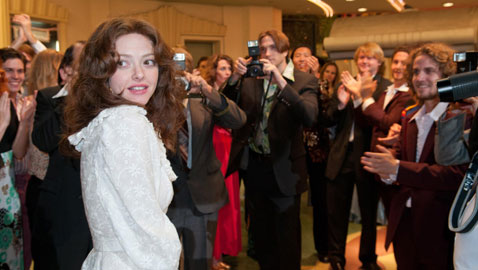 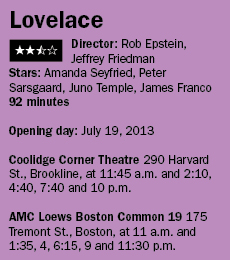 For those not in the know, Linda Lovelace (born Linda Boreman) was the first adult performer to become a household name and regular punchline for Johnny Carson and other late-night talk show hosts as the free-love ’60s melted into the commercialism of the ’70s. Part of that was because she was simply the star of one of the first adult films with high-quality production values and (ahem) a plot – one in which Lovelace’s ingénue can’t find her clitoris because it’s in the back of her throat. The film caught fire (it would make $600 million, and all Lovelace got was $1,250). Hugh Hefner (played with avuncular smarm by James Franco) was a fan, Lovelace got the red carpet treatment and some even embraced the film as an anthem of female sexual liberation. But behind closed doors was a different story – one of abuse at the hands of Lovelace’s husband, Chuck Traynor.

As Lovelace, Amanda Seyfried (“Les Misérables”) smoothly carries off the tricky dichotomy of sex kitten and battered spouse, and not just as a victim or shooting star, but as one caught up and swept away by something momentous and out of her control. Peter Sarsgaard, taking on the thankless role of Traynor, adds some adroit and menacing flourishes, but the role is one-note and just one of the many minor flaws that addles “Lovelace.”

Over the years many have doubted Lovelace’s spin, so much so – and it’s depicted in the film – that her publishers made her take a lie detector before printing “Ordeal.” The filmmakers, Rob Epstein and Jeffery Friedman (who collaborated on “The Life and Times of Harvey Milk” and “The Celluloid Closet”) play the biopic straight up and pedantic, much like they did with “Howl,” though in telling Linda’s story they do delve into the business side of the industry. Oddly enough, it’s not as sleazy as you’d think. All the sleaze that there is in the film is heaped on Traynor, who shills out his wife out for quickies and worse. (Traynor, who it seems was addicted to porn stars, would later go onto marry Marilyn Chambers).

Lovelace made only a handful of adult movies and later joined with Gloria Steinem to speak out against the porn industry. She never hid from what she did, and Epstein and Friedman use that to capture the soul of a woman caught between two extremes, unable to escape her past yet able to come to terms with it as a mother, wife and daughter (of very conservative parents). It’s an intriguing and touching portrait that owes much to Seyfried. Like Lovelace, who died in a 2002 car accident, she proves she’s more than just a pretty face and capable of so much more.