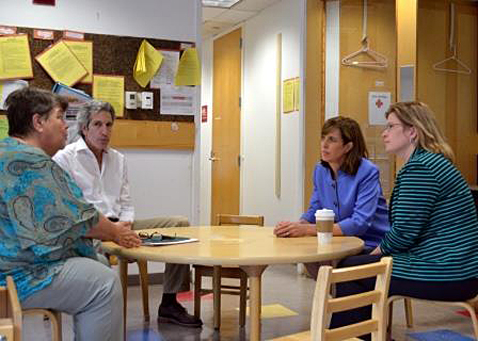 From the Katherine Clark campaign, Sept. 10: Budget cuts from the “sequester” that are kicking more than 2,000 Massachusetts students out of Head Start classes and taking $14 million away from 7,600 special-education students brought state Sen. Katherine Clark, a candidate for an open seat in Massachusetts’ 5th Congressional District, to Cambridge for a Tuesday tour of Head Start classes.

Clark joined city councillor and state Rep. Marjorie Decker on the tour of Head Start in Cambridge, where sequestration cuts implemented by extremist Republicans in Congress mean classrooms will not be able to open until Sept. 23.

Her Pledge to Women and Families is to go to Washington to lead the charge to increase early education funding, which studies show can make a huge difference for children, and improve child care options.

“Education is the great equalizer in America. A family’s ability to access top-quality schools and child care should not depend on their income or their ZIP code,” Clark said. “When a working family can’t depend on their child care, it makes it difficult to keep a job and make ends meet. And when our kids aren’t learning because of budget cuts, we’re shortchanging our future.”

Clark said that in Congress she would fight Republicans blocking President Barack Obama’s agenda for early education, which includes preschool for all; the creation of an Early Head Start-Child Care Partnership; and the expansion of an initiative to get child development professionals to make home visits to meet with at-risk families.

“Washington is broken because extremist Republicans care more about turning the clock back on women’s rights and slashing vital programs than they do about investing in our nation’s future,” Clark said. “The time is now to get kids back in their classrooms by restoring funding for Head Start and other early education programs. Progress for our children and our families can’t wait.”

“Investing in early education is our chance to give children the best possible start in life,” said Decker, who attended Head Start as a child. “All of the research shows that the first five years of life are the most critical to brain development. I am supporting Katherine Clark because I know that as a mom and as a public servant with a long-standing commitment to education, we can count on Katherine to continue to fight for all of our children and families in Congress.”

As a mom of three boys in public school, Clark said she knows firsthand the importance of public education and investments in early education and special education.

“My youngest son had a serious speech delay,” she said. “But through an early intervention program, he was able to overcome this issue and no longer needed services by the time he was in first grade. I don’t need to look any further than across my kitchen table to know that these investments work.”

On top of her 2012 reading law, Clark has a long record of standing up for education. Starting as a School Committee member and general counsel for the Office of Child Care Services, Clark advocated for quality, affordable public education and child care. In the state Legislature, she championed the effort to increase school funding for cities and towns. Her advocacy was integral to securing $61 million for special education. Katherine has led efforts to create a safer and more supportive learning environment, study grade retention, implement media literacy programs and ensure that the health curriculum is medically accurate and age appropriate. Clark has earned awards from the Citizens for Public Schools, Massachusetts Association of School Committees and Children’s Trust Fund.