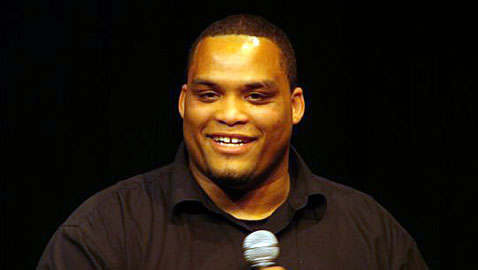 Local comedians are gathering money to help bury one of their own: Louis “Big Lue” Avent, 32, who was driving from Biddeford, Maine, to perform at Harvard Square’s Comedy Studio as recently as Aug. 15 before succumbing Saturday to a long, recurring battle with a heart condition.

Avent, the single father of an 11-year-old daughter, made his living as a standup comedian – a tough way to pay the bills until you break through. His friend, Somerville comedian Bryce Hanson, is directing fans and friends to two crowdsourcing websites with the goal of raising $7,000 to bury and memorialize Avent.

As of late Monday, with three days left, the youcaring.com site had raised $853 from 27 supporters; the tackk.com site does not show fundraising details.

While launching his startup career and writing, directing, editing, producing and starring in two shows airing on Channel CTN 5 in Portland, Maine – a sketch Comedy show called “On the Loose” and an interview show called “Street Talk” – Avent survived four open-heart surgeries through April 2012 and just last month saw his brother exonerated in a widely publicized murder trial in New Haven, where Avent was born and raised.

His mother, Ruby Avent, a Yale dining services worker who raised seven kids, is named as the beneficiary of the fundraising efforts.

Sarah Lisewski, the organizer of the youcaring.com fundraiser, called Avent “an amazing guy … he just wanted to make the world laugh. To know Lue was to love him, that’s the truth. Lue made an impact on you even if you only met him once.” She went on:

I saw him suffer and be in so much pain on a daily basis, but he was still so vibrant and full of life. Louis wanted no pity. Even while in the hospital he would try his hardest to make everyone else’s lives better – and you know what, he totally succeeded. I can truly say that my life is better because I knew and loved Louis. He taught me so many lessons about love and life.

“He would do anything to help a friend. Now it is our time to help him,” she said.

With the death of Avent and a second local comedian, Colleen Morrissey of Hanson, area comics are talking about starting a “sunshine fund” to help comics and their families over rough patches.

Friends were full of stories about Avent, with Hanson recalling how they met: as Hanson performed his first-ever standup at a club in New Hampshire. “After my set, he said he liked it and gave me a Post-it note with every open mic on it,” Hanson said. “That’s the kind of guy he was. He wanted to help anyone who wanted it. He loved standup and he was damn good at it too.”

For Jay Grove, owner and booker at the Veronica Laffs Comedy Club in Raymond, N.H., the memory served in a way as a kind of grim but satisfying punchline for Avent’s life. In a recounting directed to Avent himself, Grove said:

I said, “When do you think you’ll stop wanting to do [comedy]?” You looked at me like I had blasphemed. “Never, man. Never. I’ll die doing it.”