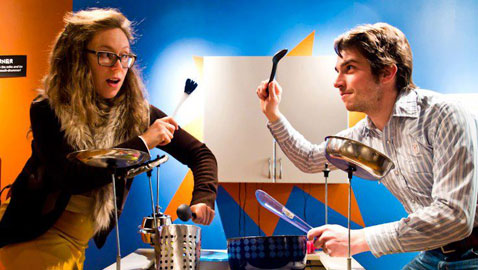 The Junk Kitchen quintet has brought such weirdo musical gems as live performances of video game themes and acoustic performances of electronic music to Inman Square’s Outpost 186 and Lilypad, and its next event is no less high-concept: ’90s grunge as performed “under the dangerous influence of 1930s jazz and blues.”

What to expect, in the Kitchen’s own words:

Jazz and blues have infiltrated the sacred soundtrack of our suburbia consumerism subculture of 20 years ago with loose-feeling swing, raunchy syncopated rhythms and off-putting “blue” notes that are the hallmarks of lively jazz.

Basically, this is what happens when Kurt Cobain the songs and hands them off to Count Basie, Cab Calloway and Artie Shaw.

The show, called “Grunge Swing Drunk,” will pervert – er, convert – music of such bands as Nirvana, Pearl Jam, Stone Temple Pilots, Weezer, Soundgarden and Collective Soul. “We will show you how it is possible for jazz and blues to be played through this music and how a little dancing, improvisation and ‘vibe’ can really change they way we hear and experience live music performance,” band leaders said.