‘The Hunger Games: Catching Fire’: It hooks you, but Lawrence is still MVP 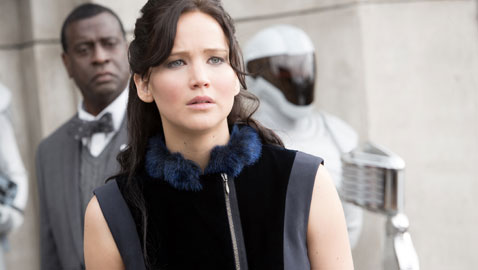 ‘The Hunger Games: Catching Fire’: It hooks you, but Lawrence is still MVP

The second time may be a charm, but hey, it’s all relative. The first “Hunger Games,” written and directed by Gary Ross (“Seabiscuit” and “Pleasantville”), felt paunchy, disingenuously deep and retro flimsy given the state of computer-enhanced filmmaking these days. That cinematic first chapter of Suzanne Collins’ runaway YA hit was a tad muddled, but then again it had the burden of informing newbies what they needed to know about the austere future world of Panem and its kid-against-kid death matches without boring the stuffing out of its loyal readership’s attention-challenged minds. 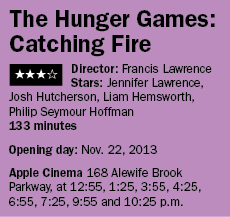 What made the first “Hunger Games” adaptation smolder, beyond its kinetic plot and high kitsch, was star Jennifer Lawrence, already revered for her work in “Winter’s Bone” and subsequently rewarded with an Oscar for her performance in “Silver Linings Playbook.” The actress, who possesses a wide, luminous face, aptly brought to the fore the deep disdain and skepticism imbedded in her can-do heroine, Katniss Everdeen. But living under the tyranny of a fattened plutocracy obsessed with power, control and hedonism while the masses slave and starve tends to do that to anyone possessing the faint embers of freedom and righteousness in their bellies.

Much has been made of the franchise’s lifting from the 1999 Japanese thriller, “Battle Royale” (also made into a movie). Both in their own right are clear borrowings from “1984” and “Lord of the Flies” and, more to the point, dumbed-down fusions of the two groundbreaking classics. In cinematic form, the series roils eerily with the grand cheesiness of “The Running Man,” “Logan’s Run” and even “Battlestar Galactica,” but where those vehicles could be tongue in cheek, “The Hunger Games: Catching Fire” continues to be either dead-on serious or wholly over-the-top spectacle. Both offer their rewards, but overall it’s hard to consume this film’s higher-reaching message – if there truly is one – with any respectable seriousness.

“Fire” picks up where “Hunger Games” left off, with Katniss and Peeta (Josh Hutcherson) taking a victors’ tour of the 12 impoverished districts to pay honor to the fallen tributes (those who died in the last movie). The caveat injected by President Snow (Donald Sutherland, oozing with megalomaniacal aspiration) is that the pair have to sell themselves as a romantic couple, a facade the Capitol wants as an opiate to pacify the increasingly restless populace. Katniss, who has a secret lover (Liam Hemsworth), isn’t interested, but when her family’s well-being is thrown into the mix, she plays nice – for a while.

That grumbling unrest holds the makings of a revolt (what took so long?) that makes Katniss its reluctant face. Snow, none too pleased, initiates a new Hunger Game, pitting the victors of the past against each other. It’s at this point that Phillip Seymour Hoffman wanders in from left field as the new game master orchestrating the deadly doings in the arena – which are far better imagined and more tautly rendered (by director Francis Lawrence, a vet of fantastical mayhem, with “Constantine” and “I am Legend” to his credits) this time around. The movie’s nearly halfway over by the time we arrive at the game, but the good news is that the steep preamble means plenty of raucous screen time for Woody Harrelson, back as the drunkard former victor, Haymitch Abernathy, and Stanley Tucci as the garish game show host, Caesar Flickerman, who with his pompadour and false sincerity is an entertaining rival to Richard Dawson’s indelible snake from “The Running Man.”

If there’s one pebble-in-the-shoe issue I’ve had with the series, it’s the hokey grandiloquence about oppression and rebellion that postures to make some type of meaningful political statement. Simply living in such dire straits as those in the districts do, one can only imagine that it would be preferable to go out in a blaze of defiance than die a starving cur, beaten and broken. The script, bolstered by “Slumdog Millionaire” scribe Simon Beaufoy, doesn’t make any true inroads here. And in there too, Hoffman, the brilliant actor, feels inert and lost amid the pomp. So too does Sutherland as the flat, cut-out dictator, little more than Ming the Merciless dropping in from Mongo. Places on our planet less overt in their tyranny – Liberia and Libya, to name a few – have tossed dictators. Snow and his ilk have been in power for 75 years, and all that after a bloody revolution, which makes you wonder what kind of shithole Panem was before. (Panem is purportedly some amalgam of North American countries).

In the end it’s again Lawrence and her resolve that carries much of “Games.” A star of less capability might have given a less nuanced performance and put the weight on Lawrence, the director. Once the games are on, though, the film leaps like a deer through the woods. And it’s here too, that Jena Malone drops in as one of the victors, full of sass and verve and pulling off an audacious costume change in an elevator before the eyes of other riders. Like Harrelson and Tucci she adds a well-timed shot of zest. The two men circling Katniss, however, don’t fare as well. Hutcherson and Hemsworth are dumbstruck and inert, but thankfully Lawrence is in the middle and capable of making the subplot palatable.

Displeasingly, the film ends abruptly. Like the penultimate “Harry Potter” chapter, it’s a hinge for the next installment, and while that’s obnoxious in the broad sense, it does leave one wanting in all the best ways possible. Once skeptical, I’m now hooked.