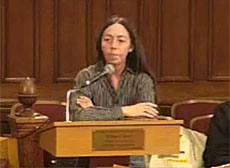 Resident Heather Hoffman speaks at the Dec. 2 meeting of the City Council.

Sure, you want your City Council to act swiftly, but with this council it’s worrisome when it does. A classic move is debating an issue such as a a zoning petition for months until it’s right at the point of expiration, then offering up last-minute changes and complaining when people want more time to look at them because “we’ve been talking about this for months.”

When it came to a Kendall Square zoning change asked for by the developer Boston Properties, though, the council instead moved swiftly enough Monday that the petition had another two months before it expired. A majority of six councillors just didn’t think there was anything left to examine or change.

We’ll see. The last time Boston Properties snapped its fingers for action – resulting in an incredibly fast month of start-to-finish legislation that cost the public 42 percent of a public garden – the responding councillors wound up looking pretty dumb.

Eventually we’ll also know how things worked out with this “Ames Street District” the council approved, where we’re getting an apartment tower and some ground-floor retail connected to that very same rooftop garden and the parking garage on which it sits.

What you see below is public testimony from East Cambridge resident Heather Hoffman, a lawyer who attends most meetings of the council and Cambridge Redevelopment Authority and has followed this Boston Properties apartment tower proposal from the start. First is video of part of her testimony from Dec. 2. At the bottom of this post is the bulk of her testimony in written form. (Here’s a link to her complete testimony as part of the council packet for the Dec. 2 meeting.)

It’s five minutes, but it’s an articulate and fairly fun summation of the relationship between Boston Properties and the council, even though it gets a little thick with zoning and real estate jargon at points. It would have been really important if city councillor Minka vanBeuzekom had stuck with her call for reconsideration of last week’s vote approving the Ames Street District.

Since vanBeuzekom called off her reconsideration, just bookmark this in your Web browser and tuck it away in the back of your head for another read or listen in a few years when we see how this all worked out – or even sooner, as changes comes to Central and Kendall squares – for an understanding of how developers get more out the city than the city’s officials can get out of them: Because our councillors don’t take the time or energy to ensure the city gets what they say is wanted.

Or to put it another way: When Cantabrigians call for “smart growth,”  read or watch this for an understanding of why this isn’t the crew that’s smart enough to get us there.

There are two items that you will be voting on in the latest version of Boston Properties’ just-give-us-this-one-more-thing-and-you’ll-have-your-Kendall-Square-residential-development scam. The one you could vote on tonight is yet another zoning amendment. The zoning amendment story goes back to 2001, when the MXD District development cap was increased by 200,000 square feet, which could be used only for residential purposes. The [floor area ratio] for a multifamily residential structure, as far as I can tell, has always been 4.0 in the MXD District and in the Kendall Square Urban Renewal Plan, although there are provisions to modify that if a building is a mix of uses with different FARs. Several years ago, BP even submitted plans for a building permit across the street from the current proposed site, and I have found no indication that a 4.0 FAR was a problem.

Yet now that BP has painted itself into a corner by using that other site for something shinier than an apartment building, they act as though they were surprised to find out that the zoning says what it’s said for years and so you have to get rid of any cap on residential FAR. They could have addressed this back when they got that zoning change, when this council gave them 300,000 additional square feet that they just had to have for the Broad Institute, and in return they gave us, the residents of Cambridge, what amounts to the value of my house and a studio condo, along with a promise to give you a sketch of an apartment building on a wet cocktail napkin. Do not give them even more license to make up the rules as they go along by getting rid of the FAR cap for multifamily housing. Figure out what it needs to be, with a little extra if you wish, and make it that.

BP has played fast and loose with the definition of open space, apparently counting a median strip and odd bits of pavement used as motorcycle parking as open space. While it might well be better from a planning point of view to plan the open space strategically throughout the district, Boston Properties has shown that it cannot be trusted to tell the truth about open space, nor to safeguard it without a very short leash. Think long and hard before you let them get rid of the lot open space requirements, another need they can’t possibly have just discovered. The best open space in Kendall Square, and my former favorite anywhere, the roof garden, is but a shadow of what it was because this council succumbed to the word “Google” and once again gave away the store. Armed with 50,000 square feet of space from the Broad upzoning that the Broad magically didn’t need after all, BP was able to convince you and the Cambridge Redevelopment Authority to let them build on this open space. It should surprise no one that Google doesn’t appear to be using their 25,000 square foot building that replaced this wonderful parkland the way they said, the way that necessitated the configuration you let them have. What did we get for this? Two million dollars and land that BP didn’t even own that has already been open space for decades.

What do we get for all of these new gifts to BP? Nothing.

Next is the proposed sale of a 20-foot strip of Ames Street. I still don’t understand why BP needs more than is required to build the new building, and I want to reiterate my belief that all of this land that is now public needs to remain used for public purposes, except for what is necessarily going to be covered by the new building. In its offer, BP certified under the pains and penalties of perjury that it had sufficient assets to undertake this project, and I imagine that all of us believe that the $2,010,000 they offered is well within their financial capability. Why, then, do you think they went to the Cambridge Redevelopment Authority before submitting this bid to ask the CRA to contribute $1 million to the cause because BP decided that they just couldn’t make the numbers work, i.e., they couldn’t afford to do the housing? To their everlasting credit, the CRA said no, although they did agree to stretch out the payments BP will owe them. In addition, the CRA extracted several other concessions, including extending the open space covenant for the roof garden as public parkland to 99 years. You guys could learn a lot from them. You’ve let Boston Properties lead you around by the nose for more than a decade over this housing so many people want to see, and you’ve got nothing to show for it. The CRA, on the other hand, said no and got some other things they wanted.

Finally, let’s look at this housing. We want housing in Kendall Square. We want affordable housing in Kendall Square. I have listened to hours of Council speechifying about the alleged 15 percent affordable housing requirement, which we all know is a lie unless you flunked arithmetic and can’t tell the difference between 15 [percent] and somewhere around 10 [percent] or 11 [percent]. So could someone explain to me why BP is planning to build 240 to 250 units with 30 to 32 of them affordable? They don’t get bonus units and square footage in the MXD District, do they? How could they if there’s unlimited FAR? Why are they talking about 12.5 percent affordable housing instead of 15 percent? At what point do the city and this council join the CRA in saying enough is enough?