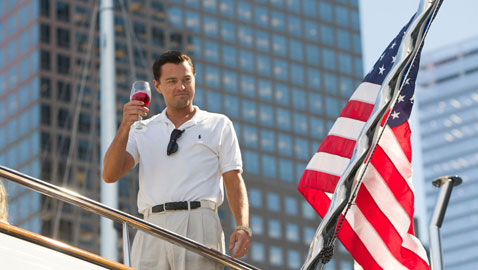 “The Wolf of Wall Street” is everything “American Hustle” wanted to be and more. It’s smart, mean and makes a pointed political statement while rolling in the excess of its characters. As far as drama goes, let’s face it, rags to riches and success isn’t so alluring. No one wants to see a nice guy make it – they want to see someone claw their way up, live large and fall hard. Look at “Scarface,” “Goodfellas” or “Wall Street” to name a few. “Wolf” and “Hustle” are less violent and black and white, but the elements of greed, lust, envy and hubris are all there in fine, fermented form. 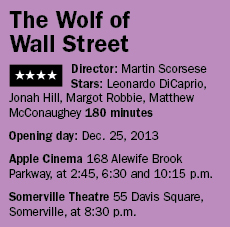 The two films too are based on true stories and take place in New York City during high-flying eras that predate cellphones and the Internet. “Hustle” jogs through the Abscam scandal of the 1970s via a petty con who, ensnared by the feds, helps draw in corrupt pols. “Wolf” is smaller fare, following the hilariously self-destructive travails of a hungry wannabe who, from humble origins, gets his brokerage license on the eve of the Black Friday market crash of 1987 and instead of cashing out and moving on to something more surefooted, goes on to parlay his smooth cold-calling skills into a pump-and-dump scheme, manipulating the penny stock market and making a killing on the 50 percent commissions. The sad underlying truth to “Wolf,” as wonderfully articulated by an over-the-top broker (a blazing Matthew McConaughey, adding to his banner year) teaching the naive “Wolf” pup the ropes over a five-martini lunch, is that money in motion is change in your pocket. Always be selling and always be buying; forget about value added. If money is made, good, but it’s all about movement.

As Jordan Belfort, that young fry of Wall Street who morphs into a kingpin of crack and cash, Leonardo DiCaprio delivers one of the strongest performances of his impressive career. It’s also Martin Scorsese’s best film since “Goodfellas.”

Scorsese, a soft-spoken, reflective soul, has made some of the most violent, in-your-face films of all time. “Wolf” is no exception. Sure, there’s no real gunplay or jaw cracking per se, but  “Wolf” is brutal. You never see the plumbers or middle-class mom and pops who are defrauded, led astray and into ostensible ruin, throwing their life savings away on junk because a faceless, confident voice on the other end of a telephone told them he was going to make their dreams come true and put them on easy street. Jordan too is a train wreck, snorting coke and entertaining escorts in the office during working hours. (Yes, the film’s pretty racy. Working women work the conference rooms during work hours, servicing the execs, before giving the new hires a turn, and female co-workers, either caught up in the frenzy of money, the desire to get ahead or the sheer love of sex, are as happy to get on their knees and perform fellatio as they are excited by closing a deal.) Belfort lives big and he’s fairly generous – unless you do something to irk him; then you’re fired in the most humiliating way possible. And he does all this while popping quaaludes, getting a candle inserted into his rectum and raising a family.

How a self-interested SOB such as Belfort (branded “The Wolf” by Forbes Magazine) spins so rivetingly for three hours is a credit to DiCaprio, Scorsese and screenwriter Terence Winter (”Boardwalk Empire” and “The Sopranos”), who get at the decadence and depravity and don’t try to make Jordan heroic. “Hustle” tries to have it’s cake and eat it, but the characters too don’t feel real or likable. Jordan lives the American dream and nightmare and it couldn’t be more illuminating or a reflection of what ails us. Jordan is Gordon Gekko with a heart and insecurity, a boy with a supermodel and a race car. The formula has played out tragically for celebs and athletes before, but none have done it with such bombastic aplomb as Jordan.