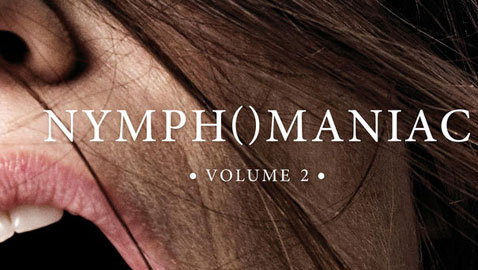 The good news is that Danish director Lars von Trier saves his best for last, at least in his two-part “Nymphomaniac” about a woman with an insatiable sexual appetite and repugnant personal conduct. If you missed Volume I, you need to go back before going forward. To dive in without would be pointless. The rest of you tormented souls all know that Joe (Charlotte Gainsbourg) sits in the apartment of Seligman (Stellan Skarsgård) after he has found her beaten and lying in the streets and she is in the midst of recounting her story of being “a terrible human being” from her childhood. 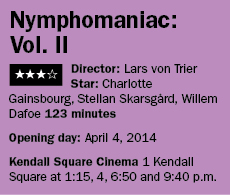 The plus is that Joe’s flashbacks are closer in time to the now and Gainsbourg, an immensely talented and game actress, is able to play her younger self instead of relying on Stacy Martin, a ravishing but largely wooden prop who only seems to have a flicker in her eye when sucking cock. Gainsbourg too gets a workout – double penetration with two Africans who can’t speak English (she needs a translator to set up the sexcapade) – and goes into the loan-collecting business (for Willem Dafoe, almost as sinister as he was in “The Grand Budapest Hotel”), in which her newly learned talents in B&D extract funds quicker than a brutal bruising.

But Joe does not emerge as any more sympathetic in this expanded chapter. She’s married Jerôme (Shia LaBeouf), the young man she targeted to take her virginity, and they have a young child, yet every night she leaves her child alone to sit in the waiting room hoping to catch the eye of an S&M master (Jamie Bell, aka “Billy Elliot”). The negligence is paramount, and the addiction ephemeral at best. Truly, she may just be the “terrible human” she professes she is; and yet with such condemnation onscreen there is no discernible greater contemplation. If there was, I missed it between the beatings and front and back entries.

Still, and thanks mostly to Gainsbourg, there is a hypnotic allure to Joe – the desire to see what makes her tick. The fact you don’t get much more beyond some sex-addiction and dysfunction mumbo jumbo, that’s okay; von Trier, for all his messy, Pan-like porno-provoking, does spin a tale that comes around with some pointedness. It may take some unfriendly friction and long jerking, but in the end Lars gives everyone their release.