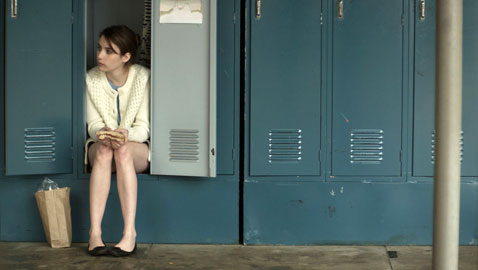 Bored kids of privilege looking for thrills, validation and love. You’ve seen it done funny and twisted before in “Fast Times at Ridgemont High” and more recently driven by ennui in Sophia Coppola’s “The Bling Ring,” which felt like a modern-day retelling of her “Marie Antoinette” – after all, aren’t cake and celebrity bling the same thing? So it’s fitting that the latest entry into the teen anxiety crisis genre is the debut of Sophia’s niece, Gia Coppola, who gives a shout-out to auntie by panning over a poster of Sophia’s debut film “The Virgin Suicides” hanging on the wall of one of her darlings. 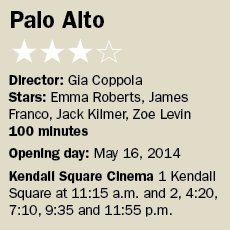 The family ties run deep. The film is based on a collection of short stories by James Franco, who also plays the amiable girls soccer coach Mr. B., and stars Emma Roberts (Eric’s daughter, Julia’s niece) and Jack Kilmer (son of Val, who crops up in an outrageous cameo).

Things begins ordinarily enough with two teens getting drunk in a vacant parking lot and bantering some nonsensical smack about who would be king and who would be servant until one of the two suddenly and violently ups the stakes. The eruption lingers, like a shock in Larry Clark’s “Kids,” and the two boys, Teddy (the younger Kilmer) and Fred (Nat Wolff), drift through the movie like Crispin Glover and Keanu Reeves in “River’s Edge,” tied together by circumstance but never fully on the same page. Teddy’s got a long-standing crush on April (Roberts) that he can’t come to articulate, while April’s baby-sitting relationship with single dad Mr. B. begins to shift and change.

Like Amy Heckerling’s bountiful and iconic “Fast Times,” plot threads fan out through the affluent neighborhood and ultimately return to center in entwined revelation. The ebb and flow and dreamy composition (adroitly shot by Autumn Durald) is so confident and tight as the film floats from one precarious parentless situation to the next that one wonders if 26-year-old Gia weren’t getting on-the-spot advice from her aunt or legendary grandpapa, Francis Ford.

The film’s true strength, however, lies in the nuanced characters and the able performers who bring them to light. Roberts conveys heavy weariness with just a titillating flicker of brightness as the conflicted April. Much of the film’s burden is on her, but it’s Kilmer, with the vacant soulful eyes his dad flashed as the iconic Jim Morrison in “The Doors,” who carries the torch. Of the anxious lot, his Teddy is the most vulnerable and outwardly hopeful. You can see promise and disaster hang in the balance of his every decision. Wolff, a musician by trade, is a sociopathic tour de force as Fred, who would be at home in any Clark or Gus Van Sant project, while Franco, for the most part, is the flip side of his “Spring Breakers” persona but still too dangerously close to girls half his age. The other scene stealer, besides Wolff, comes in the doe-eyed Zoe Levin (”The Way Way Back”) as Emily, an attention-deprived waif who fills her neediness with a quick drop to her knees. Despite her depraved practices, her sweetness shines through, even as she comes between the two boys.

Not everything in “Palo Alto” quite holds together. There are several plot developments that, while small and easy to let pass, feel overwrought and lacking in earnestness. Still, the latest Coppola behind the lens has served notice, and it will be interesting to see how she follows up. If pedigree is any indicator, the future is bright.