‘And So It Goes’: Embittered widower discovers granddaughter, Keaton, love 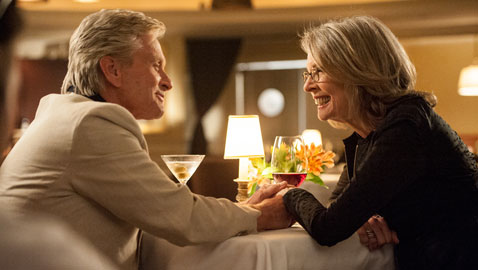 ‘And So It Goes’: Embittered widower discovers granddaughter, Keaton, love

Rob Reiner, a.k.a. “Meathead” and the creative force behind quirky classics “This is Spinal Tap,” “When Harry Met Sally” and “The Princess Bride,” returns to form with this bag of mixed nuts about an embittered widower hit with life-altering events that threaten to melt his icy heart and make him feel again. It’s a clichéd premise, no doubt, but thankfully Reiner and cast play up the comedic angle and make what could have been a flat, Lifetime weepy something springy and an intermittent joy. 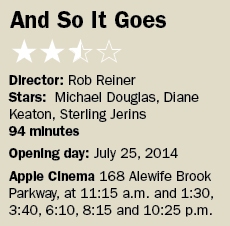 Set in the coddled community of Fairfield, Conn., Realtor Oren Little (Michael Douglas) is trying to get over the loss of his wife and sell his palatial estate (for a cool 8 mill), but because of a professional slump and the personal setbacks, he slums it in a four-unit rooming house on Long Island Sound and grouses about his neighbors with three-olive rancor. The script by Mark Andrus, who penned “As Good as it Gets” (you’ve gotta love these inspired titles), employs some pretty frilly shenanigans – and not all of them stick. Take the fact Oren’s son (Scott Shepherd) is a recovering addict and heading to jail for insider trading. It’s never explained how he got from shooting up to shorting shares, but so it goes. He’s also got a 10-year-old daughter, Sarah (Sterling Jerins), who needs a custodian, as mom’s whereabouts are unknown. When asked to take on Sarah, Oren’s pushes back, saying he was a lousy dad. That’s the kind of prick we’re dealing with, at least initially.

Thankfully for Sarah and the sake of the movie, Diane Keaton is in the mix as Leah, another resident of “Little Shangri-La” who’s also recently lost her spouse and is occupying her lonely golden years by trying to live out her dream of becoming a lounge singer – though her success is addled by her proclivity to break down and cry in the middle of a song. Without much prompting Leah jumps in and takes Sarah under her wing while leaning on Oren to open up and fulfill his responsibility – and romance blossoms slowly into the picture as well.

In watching “And So It Goes,” I had to wonder if Keaton was as wonderful a human in person as she’s been on screen all these years. Her self-deprecating sprightliness and inherent warmheartedness has long beguiled (from back in her “Annie Hall” and “Sleeper” days), and I have yet to find a movie she has not elevated by appearing in it. That said, the rest of the cast is superb as well. Jerins’ Sarah is mostly plot fodder, but the single mom upstairs (Annie Parisse) who teaches her boys to mimic “Oren the meanie,” the police detective (Maurice Jones) with whom Oren won’t share a parking space to ease his very pregnant wife’s physical challenges and Oren’s foul-mouthed, elderly co-worker down at the Realty firm (Frances Sternhagen) all add necessary and sassy nuance. Sternhagen pretty much walks away with her scenes, while Reiner takes on the unenviable role of the egregiously toupeed leader of Leah’s ensemble who has feelings for her as well. He and Sarah are the most vulnerable characters in the film, yet they’re held mostly at the corners.

The one aspect of “And So It Goes” that kept pulling at the corner of my eye, was the picture-perfect, one-percenter depiction of Connecticut. Even Little Shangri-La, in need of some repairs, appears idyllic and Eden-esque, which is how most people imagine Connecticut. As a person who grew up there in less desirable hamlets (Oxford and Newtown, before it became fancy) and knows this is not universal, I was uncomfortably on edge for a while and ultimately relieved when the search for Sarah’s mom leads Oren and crew into the mean projects of Bridgeport – which is how the real Connecticut goes: extreme wealth and extreme poverty in such close quarters that a spare mile or two can be the difference between tony affluence and hell.

The hell in “And So It Goes,” lies in its limited and rigged trappings. Keaton is its savior. Her charm and the pleasure of seeing her do her emotionally mercurial stage acts buoys the film, as does Douglas’ cantankerous misanthrope, even though he’s about as 2D as 2D can get.

The screening I attended was sponsored by AARP and was, without doubt, the most respectful crowd I’ve ever sat among since plopping down with a posse of Civil War re-enactors during a screening of “Gods and Generals.” Perhaps there’s a new target market out there beyond teenage boys and romance-minded girls? The pre-film promo blitz that showed seniors getting their groove on, updating their Facebook status on the fly and Skyping with their grandkids seemed like a pretty tranquil and appealing existence. Douglas and Keaton make it more so, as does the closing flourish nostalgically staged to Judy Collins’s mellifluous “Both Sides Now.” Getting old might be cool after all.