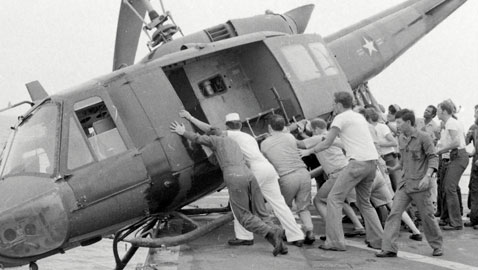 Beyond slavery (and civil rights), the mistreatment of Native Americans and a woman’s right to vote, the Vietnam war might be the most ignominious stain on American history. Sure, the ongoing wars in Iraq and Afghanistan, same-sex equality and wealth disparity might make that list in time, but Vietnam – a.k.a. the “living-room war” – consumed the American conscience for more than a decade. It was something new, too: The two Great Wars had us justly battling tyranny, championing the oppressed and righting the road to freedom; Korea was something else, something more complex, something that appeared to be in the same arena of righteous, and yet was really a Cold War bellwether delineating the fractious ideological divide between Democracy and Communism. Tough lessons were learned from that war, but Vietnam, in an era of burgeoning liberalism, free love and racial integration in the wake of “Ozzie and Harriet” and inflamed by mandatory enlistment for the draft, touched off a succession of social unrest and activism that caused the country to reconsider its foreign policy and has rippled forward to the wars that confront the United States now. 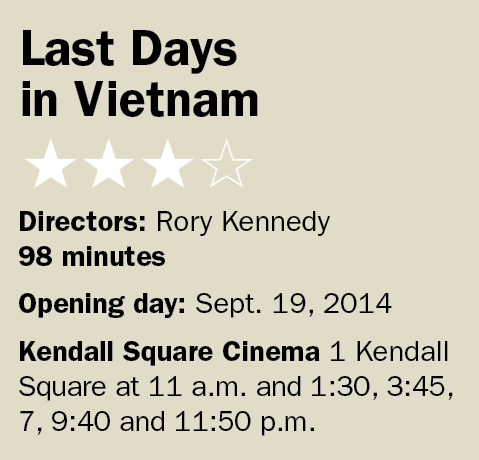 That said, Rory Kennedy’s pointed documentary, “Last Days in Vietnam” doesn’t deal with much of the political turmoil that steamrolled the country or the notion of right and wrong or Red versus red, white and blue. Instead it chronicles a very narrow slice of the war – the time after the Paris peace accords, when the United States had officially exited the war and the ensuing dilemma that faced U.S. forces remaining in Vietnam and what to do about the allied South Vietnamese who faced peril at the hands of the oncoming North.

As Kennedy’s docu has it, Nixon’s inglorious departure from office was the catalyst for chaos in Vietnam. The North were largely fearful of Nixon’s resolve, and with him gone and vague language in the accords, as the U. S. withdrew a southward incursion was launched. At first, U.S. ambassador Graham Martin, who had the authority to mandate an evacuation, did not believe the imminence or the potency of the threat, so many U.S. military officials began an illicit “black” operation to smuggle “at risk” South Vietnamese out of the country – even onto U.S. naval ships. As the danger escalated, the North bombed the Tan Son Nhut Air Base to shreds – making it unfit for use – and when Martin finally called for an official evacuation, the desired mass means of boat and fix-winged evacuations were not possible. Thus the famously televised, round-the-clock, airlift by (slow, low-capacity) helicopter was launched.

Much of the talking head testimony gets delivered by the heroic U.S. servicemen who were at the U.S. embassy during those final hours, as well as their South Vietnamese allies, some of whom made it out and some of whom did not. Probably the most harrowing recounting is about the pilot who flew a giant Sea Stallion into the middle of Saigon to evacuate his wife, children and others and then blindly out into the ocean, not knowing where to find a ship and low in fuel.

Piecing together the vast and moving tales of perseverance and humanity, Kennedy – niece of the former U.S. president – holds her focus and never succumbs to heavy-handed methods. Seamlessly she lets the participants and events build the historical experience from the ground up. One deft touch she quietly achieves is the sly transformation of Martin from a blind-eyed goat to a last-boots-on-the-ground hero. President Ford too, concerned about people and not political gain, goes to bat for the South Vietnamese when America and Congress were war weary and wanted nothing more to do with the South Pac peninsula.

Kennedy, whom you could argue is simply a privileged dilettante, has made just a handful of other films, “Ghosts of Abu Ghraib” (2007) and “Ethel” (2012), about her mother and the Kennedy dynasty. Here the scope and task are bigger, there’s no hiding behind artifice or personal revelations and, honestly, her name distracts from what is a very compelling and complete document. What she has rendered is so subtle and poignant that it sneakily stays with you – the true test of an effective documentary, something that enriches as it informs and moves. “Last Days in Vietnam” delivers new insight and understanding into a dark chapter in American history. It also cast light on a promising filmmaker whose name stems from American legacy itself.