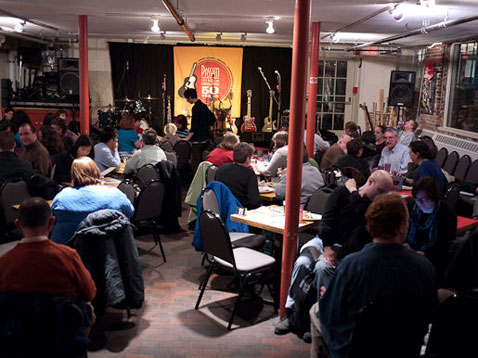 New Passim chef Brandon Arms says he knows most customers are drawn primarily by the 400 acts per year on the stage at the end of the room. (Photo: Jennifer Che/Tiny Urban Kitchen)

Since the closing of Veggie Planet in August, Club Passim hasn’t had a chef. And since the abrupt closing of Garden at the Cellar in December, chef Brandon Arms hasn’t had a restaurant.

But Arms is taking over as chef at the restaurant inside Club Passim, with an opening expected late this month after a complete revamp of the kitchen and menu. Lunch is expected to be daily from 11 a.m. to 3 p.m., with the kitchen open for dinner to concertgoers starting an hour before showtime.

The name of the restaurant is simply going to be Passim, like the club. 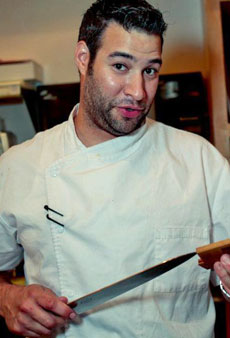 “That’s just what it is. I’m not looking for a brand or anything like that,” Arms said Saturday.

Passim intended to get a replacement to Veggie Planet in place quickly, but talks between Arms and the legendary folk club began only early this month, thanks to an introduction by mutual acquaintance Mary Canning of Harvard Square’s Follow the Honey shop, Arms said.

“Because we’re sort of starting from the bottom up, I kept the menu based on some of my classic, signature dishes that I already know the cost on, stuff like that, so I can really pay attention to the mechanics of the kitchen,” said Arms, who estimated a monthly turnover on the menu once things got rolling. “I have to keep it interesting, just to keep myself entertained.”

A graduate of New England Culinary Institute, Arms has worked alongside some of Boston’s finest chefs, including Clio’s Ken Oringer, and ran Garden at the Cellar from 2011 to 2014. He’s modest, a far cry from the swaggering, self-absorbed chefs popularized by reality television, and his single boast while looking forward to his new restaurant comes when asked what dish he was most excited to cook every day.

“My butter-poached lobster is amazing – I know that’s sort of tooting my own horn, but there’s no getting around the fact it’s just delicious,” he said.

Desserts are wide open, and while a Passim breakfast is coming fast – probably a month after opening – it awaits a conversation with the kitchen team Arms is building and with Passim. Arms hopes for breakfast seven days a week and “something along the lines of a jazz brunch” on weekends.

Daniel B. Hogan, executive director of the club, sees the new restaurant as a way to foster community through more programming. He plans free, live lunchtime music as a platform for up-and-coming artists, likely starting at one day a week, and morning music aimed at children. He explained the plan in an email:

We are also going to begin weekday midmorning programming for preschool children and their families once we get the breakfast menu set up and operating. It would be a great way for two to three families to bring their children in and then some of the parents can go off to the Square for shopping or other activities. Right now, there are few opportunities for young children to hear live music.

It’s a big leap from Veggie Planet, which featured vegetarian dishes either served in a bowl with rice or as a pizza, and a couple of comfort food dishes: whole wheat macaroni and cheese and peanut udon noodle salad.

Its run at Passim ended in August, after the team’s Veggie Galaxy diner opened in Central Square. The farewell message on Facebook explained a problem unique to operating a restaurant inside a nightclub: “Since Club Passim’s seating capacity was reduced in late 2011 due to fire code enforcement, and given that there is no table turnover in their concert room every night, it has become unsustainable to continue to operate Veggie Planet in this space.”

The fire code restrictions shrank dining to 102 seats from 125.

One way Arms’ restaurant solves this, according to Passim, is by making Club Passim a destination “for the whole community from morning to night.” Arms also aims to make the figures balance through thoughtful decisions and aggressive management, including waiting on some local sourcing until he can find the right foods from the right places.

“You have to manage your product. You have to be very tight – watching your orders, watching your waste, making sure you’re utilizing as much as you possibly can. I’ve got to utilize everything, so I’m thinking about who am I going to use for a bread purveyor, what kind of a bread am I going to get, what am I going to do with the leftover bread. Everything is going to have its own purpose,” he said, mentioning that even deciding whether Passim gets a new look to go with the new restaurant comes after kitchen construction, when it’s clear how everything fits.

Dan Hogan, executive director at Passim, is clearly excited about Arms’ arrival in the kitchen.

“The addition of chef Brandon to the team represents a whole new culinary direction at Club Passim,” he said. “His artistry and experience allow us to offer exceptional dining.”

But Arms is unassuming about his role at a restaurant where most diners are drawn by the 400 acts per year on the stage at the end of the room, and the history goes back five decades and encompasses Joan Baez, Bob Dylan, Peter Wolf, Regina Spektor and Suzanne Vega.

“They’re there to see a show. They’re not really there to eat,” Arms said of Passim customers. “It’s sort of a different concept, which is interesting to me – trying to figure out how all this stuff is going to come together. It’s different from any situation I’ve been in, which is exciting.”

This story was updated March 2, 2015, to correct that there is only one executive director of Passim.