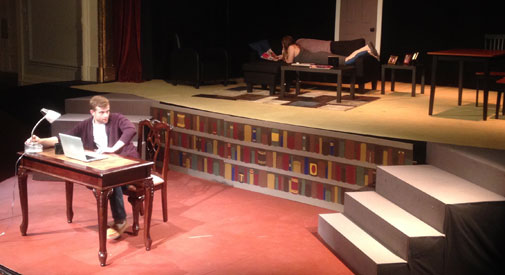 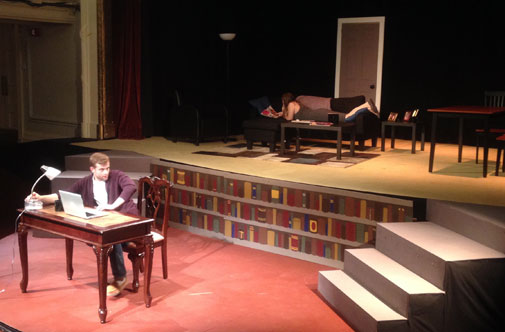 It’s worth asking why the Harvard-Radcliffe Dramatic Club chose “Jake’s Women,” playing through this weekend at the university’s Agassiz Theatre. It’s second-tier Neil Simon at best, with a 53-year-old main character and adult themes in the most boring sense of the word.

That’s not to say the play is boring – indeed, Simon invests it with a lot of quips and action, and director Boyd Hampton has filled his stage with an attractive young cast that gets to show off within the range of the play’s emotional swings: Brooke Sweeney is particularly delightful when she’s called upon to be funny, and you could imagine her line readings and knack for loopy elegance coming in handy for a Noël Coward period piece; Eliza Mantz is terrific at the other end of the spectrum, and makes the audience feel it when she cries.

But it is a young cast. Jake himself, all 53 years of him, is played by Todd Jones, a very handsome kid – a little Chris Pine, a little way-pre-scandal Stephen Collins – who could be up to the drama in a better written and structured play but is not in this clumsy sitcom, in which the climax isn’t so much earned as it is thrown in because Simon overheard a conversation about Freud once at a cocktail party.

The play starts at that cocktail party, or at least the party as Jake remembers it, with Maggie playing herself years earlier in his overactive imagination. Much of “Jake’s Women” is Jake remembering scenes from his life or imagining conversations he needs to have with people who aren’t there, including his first wife (Mantz), current wife (Sweeney), sister (an also hilarious Sarah Grammar), psychotherapist (this is New York) and daughter (young version and grown version). There’s also a date he brings home who suffers when his imagination gets out of control.

All of this gets a little heavy-handed, especially at the end, when the audience is supposed to care the most. The play is most fun when characters overlap onstage, but unfortunately Simon mainly brings out one woman – real or imagined – at a time. The constant discussion of how it works when Jake imagines conversations gets tedious, and although his work and workaholism is invoked nearly as regularly, you never believe Jake’s a writer. When you hear a snippet of his writing (even though it’s supposed to be bad) it’s implausibly terrible. But then Simon proves how bad he could be in real life with lines for this play such as “This is the third time I’m losing a child. Maybe that’s why she’s so important to me.” Or “We never did get any breaks, did we?” (Delivered in the Manhattan apartment of a white guy who writes for a living who’s married to a white business executive.) Even Jake’s avowals that he “loves women” comes off glib.

If anything, Hampton should have been emboldened and freed by the badness of Simon’s play, but the director is largely respectful in his staging. While he gives Jake a Mac to tap away on instead of a 1992-era typewriter and name checks T-Mobile, there are other things demanding an update: When Jake and Maggie meet at that cocktail party, she’s making jokes about Ed Koch that, considering the guy died in 2013, really should have been turned into jokes about the Koch brothers. Similarly, encountering a joke about Sally Field starring in “The Flying Nun” in the text should be a considered a big red flag. And talk about half-measures; it’s distracting to have an otherwise professional-quality set (also by Hampton) in the lovely Agassiz Theatre with a painted bookshelf worthy of a middle-school play. This is Harvard! Get some real books.

But blaming Simon for hobbling Hampton and his cast is unfair when compared with the favors Hampton and his cast do for Simon. The truth is, Jake and his women are great company for a night’s entertainment. The cast brings energy to the script and enough investment to counteract nearly all the play’s awkwardness, and there’s some sparkling choreography and clever stagework scattered throughout. Jones may not have the gravitas to pull off a weary, despairing, desperate middle-aged man who’s losing his mind, but if you have to spend a couple hours in the presence of that character he’s a damn pleasant way to do it.

And, hey, this is Neil Simon – author of “The Odd Couple” and “The Goodbye Girl” and countless other slick Broadway entertainments. And for five-sixths of “Jake’s Women” we see how he did it.

As to why Hampton chose this play? He read more than 20 before deciding what to stage, he said, and this was a script that had something for everyone. It also managed to find the comedy in heartbreak and loss. “I’m a big believer in finding the comedy in every situation in life, especially the difficult ones,” he said.

“Another answer is that Harvard theater is usually dominated by male roles,” Hampton said. “This show has seven unique, powerful female characters, which is rare. I wanted to work with the incredibly talented actresses of Harvard.”

Unlike Jake, when Hampton says it you can believe it. The proof is on stage this weekend.

“Jake’s Women” is at 7:30 p.m. Friday, Saturday and Sunday at the Agassiz Theater on the second floor of Agassiz House (also the Harvard College Admissions Center) in Radcliffe Yard on Garden Street near Harvard Square. Agassiz House is the structure that’s the farthest west in Radcliffe Yard, which can be entered off Garden Street across from Cambridge Common. Tickets are $12 general admission, or $8 for students and seniors. Information is here.