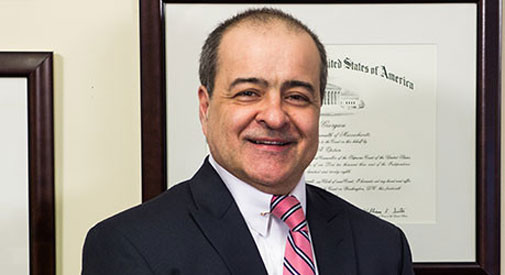 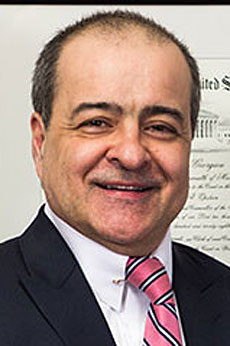 Attorney Peter Georgiou has announced his candidacy for Governor’s Council for the Third District of Massachusetts. The election is next year.

If elected, the district will benefit from his 25-plus years of experience as a trial attorney and as an advocate of working-class people, he said.

“More specifically, I will make sure that only the very best of our legal talent is placed on the bench or elevated to a higher court. I am the only candidate [so far] who has the knowledge and depth in the law of 25 years of practice,” he wrote. “It would be a rare thing for a candidate for a judicial or clerk-magistrate position to come before the council, with me as one of the eight councilors, without me knowing him or her or at least of him or her.”

“The governor’s choices will not simply be confirmed by me; they will actually be vetted by an experienced litigator. Sign holders will no longer be appointed to judicial positions even if such positions are at the administrative law judge level,” he vowed.

The council confirm nominations by the governor for judges, court clerk magistrates, parole board members and other positions, but the need for it has been questioned for years. When city councillor Leland Cheung ran for lieutenant governor last year, abolishing the council was one of his key campaign issues.

“The body as it currently functions is an antiquated waste of taxpayer dollars. The Governor’s Council has failed in its duty to provide a sensible check on the governor’s ability to appoint justices to the judiciary,” Cheung said, referring to it as “widely regarded as an outmoded relic of our colonial days to the few who know of it.”

The position even drew support from Terry Kennedy, a member of the council in the 6th District.

In the past, the district “has been plagued by judges that have paid little attention to the complaints of women with regard to domestic violence. If elected, I will make sure that people that are aware and responsive to these types of needs are given priority,” he said.

He said he strongly believed his “contribution to the judicial selection process” would make the district safer “to live and work in.”

The Lincoln resident has offices at 2285 Massachusetts Ave.

A registered Democrat, he is serving a three-year elected term as a Lincoln affordable-housing commissioner and is an alternate delegate to the Democratic convention.

He says that as a general matter, politically, he thinks of himself as a thoughtful fiscal conservative – that is, he scrutinizes taxes and fees carefully – and a social liberal.

On the Governor’s Council position, he says he will not attach any litmus test on potential appointees to the judicial bench or elevation from the trial court to the appellate division or the Supreme Judicial Court. More from his statement:

“My criteria are essentially two: 1) a deep understanding of the law its substance and process, and 2) a meaningful and measurable manifestation as to why a candidate wishes to serve as a judge.

“Many Massachusetts citizens are unaware of the important, indeed vital, mission that the Governor’s Council is charged by the Massachusetts Constitution.

“The council plays a seminal role in our state’s justice system and consequently to the function of our democracy and the stability of our society by having the power of ‘advice and consent’ of all judges and clerk-magistrates in Massachusetts. The council is the last chance the people of Massachusetts have to make sure that the best candidate for the job is picked. The governor’s judicial appointments, including the Supreme Judicial Court, Court of Appeals, Superior court, District Court, Probate Court and all adjudicatory agencies, such as the Appellate Tax Board, the Department of Industrial Accidents and other similar agencies of the commonwealth must receive the consent of the council before their appointment. As is evident this position requires a governor’s councilor to have expert and specific experience and knowledge of our justice system.

“More important, the position requires the background and depth of experience of a seasoned attorney, an attorney that has been in the ‘trenches’ of the justice system for a respectable amount of years. I believe that this experience is mandatory because it is the only way one is exposed to the traits and skills that constitute a good attorney, an attorney that would make a good judge and will serve the people of Massachusetts competently, fairly and honestly. What kind of a person should sit in judgment of others? That is the critical question a governor’s councilor must ask.

“After more than 25 years as a trial attorney, and having practiced before almost every court and adjudicatory agency in Massachusetts, and after having taught law, I have the experience to make such judgment and advice the governor of good, a fair or bad choice of proposed judicial and other appointments. My experience stems from having dealt with dozens of judges, dozens of other various court functionaries, and hundreds of attorneys and various other players in our justice system.

“I have represented plaintiffs and defendants and have a perspective from both sides of litigation. I know what constitutes a good attorney and a good judge. In my practice I have been before judges almost on a daily basis and I can without reservation say that no one can be a good judge with first being a good attorney.

“I have the background and front-line experience acquired over the course of over 25 years of trial work to make decisions as to which candidate qualifies to by a judge and which candidate does not. I would be proud and humbled to serve the people of the Commonwealth. But I cannot do it alone I need your help, and I am asking for your help.”

His campaign website, peterg2016.com, is under construction, and he expects it to be live by mid-June. Governor’s Council District 3 includes much of Middlesex County and parts of Norfolk, Suffolk and Worcester counties.