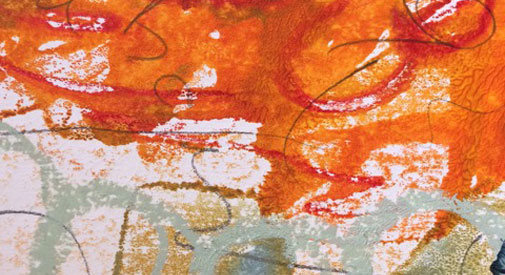 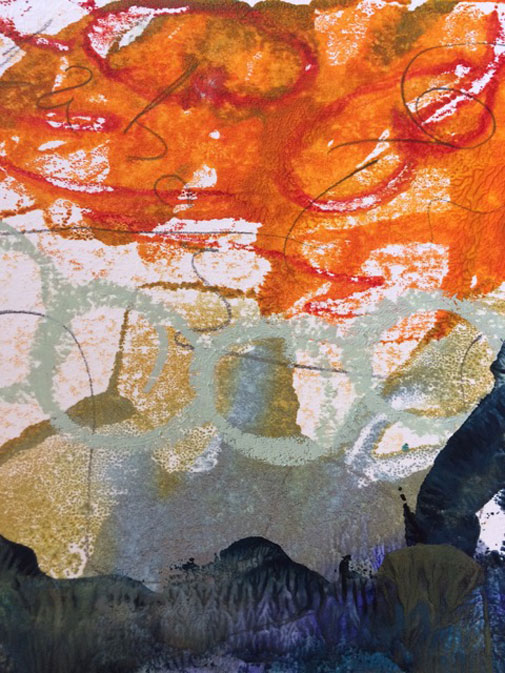 Just as two city councillors have moved for action on enacting beekeeping laws – a lack that caused a kerfuffle late last year – Cambridge gets another example of what the insects mean to our culture: an exhibition of encaustic prints at Maud Morgan Arts’ Chandler Gallery.

Encaustic art uses pigmented wax, specifically beeswax, which results in work that can often be sculpted for texture as well as painted. Encaustics are also a joy to work with because the melted beeswax “smells good,” said Lola Baltzell, president of MassWax, the 31-member local chapter of International Encaustic Artists. The group’s website calls working with encaustics “addictive.”

“When people look at encaustic work, they can’t help but touch it,” said Baltzell, curator of the exhibition, juried by Betty Bothereau, owner of L’Attitude Gallery on Newbury Street in Boston.

The field goes back to the ancient Greeks, but “the 20th century has seen a rebirth of encaustic on a major scale,” according to the Encaustic Art Institute:

It is an irony of our modern age, with its emphases on advanced technology, that a painting technique as ancient and involved as encaustic should receive such widespread interest.

Earlier attempts to revive encaustic failed to solve the one problem that had made painting in encaustic so laborious – the melting of the wax. The availability of portable electric heating implements and the variety of tools made the use of encaustic more accessible. Today it is gaining popularity with artists around the world.

Art lovers can see if they turn up their nose to encaustic art at “Wax and Paper: Encaustic Printmaking,” on display at the Chandler Gallery from Monday to July 31. The opening reception is from 6 to 8 p.m. July 9. Artists in the show include Lois Arthur; Connie Bigony; Heidi Cerullo; Barb Cone; Jane Conway; Joanne Desmond; Liz Harris; Karma Kitaj; Paul Kline; Anne Kneller; Kat Masella; Otty Merrell; Jeanne Pasch; Margaret Scoppa; and Nancy Tobey (whose work is seen above).

After taking in “Wax and Paper,” it makes sense to stop by Follow the Honey, Cambridge’s all-things-honey store, at 1132 Massachusetts Ave., near Harvard Square. It’s about seven minutes’ drive or 20 minutes’ walk from the exhibition.

Maud Morgan Arts and the Chandler Gallery is at 20 Sacramento St., in the Agassiz neighborhood near Porter Square. Gallery hours are 10 a.m. to 5 p.m. Mondays through Fridays, and by appointment.