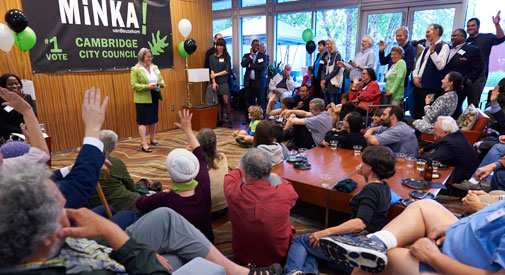 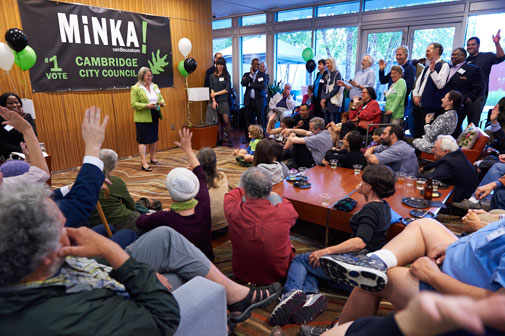 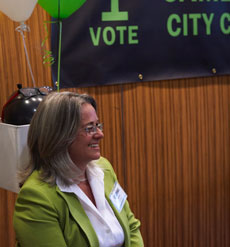 From the Minka vanBeuzekom campaign, July 2: Minka vanBeuzekom stood before a cheering crowd June 28 and announced that she will be seeking a second term on the City Council. As of Thursday, she has already filed her nomination papers, which became available Wednesday, require at least 50 signatures and can be filed until July 31.

Invoking the spirit and accomplishments of her previous term on the council, vanBeuzekom addressed supporters, friends, neighbors and other candidates packed into the common area of 100 Landsdowne.

The crowd chanted “We want Minka” as the candidate addressed them. She told the crowd that “the health of the city and its residents” would be her priority and promised the crowd she would tackle issues such as preserving open space, creating more affordable housing, universal pre-K, clean energy policies and fiscal health, saying healthy residents create a vibrant and healthy city.

“I worked hard to be one of the first two City Council candidates to return nomination papers, as a sign of my dedication to the city’s residents. As a city councillor, I will be the first to work with residents to solve issues as they arise. I want to make it clear that taking the city on a healthier path requires the participation, time and talent of many,” she said.

She called the council’s approval of a Net Zero ordinance “one of our great accomplishments” as a city and a plan that will continue the city’s legacy of environmental leadership. But passing the ordinance is not enough – speedy implementation is required, she said.

“Cambridge is already healthy, fiscally speaking, but not all have benefited. Every time I think of the changing city, I think of the young and diverse community members that we risk losing each year. Diversity is what makes a vibrant city, and I am willing to work with local schools and businesses to create and maintain job-readiness programs so that we retain our vibrant and diverse students. Hand-in-hand with that is the need for housing that is affordable,” she said.

The candidate is a 35-year resident of Cambridge. She worked at the state Department of Public Health, established a successful biotech company, led a medical nonprofit organization and helped people buy and sell residential real estate. She raised her daughters in Cambridge and laments that they and their children can’t afford to live in this city.

For information about the campaign, send email to Nora Gay.