‘The Visit’: A return for Shyamalan so the kids can see (way too much) of their grandparents 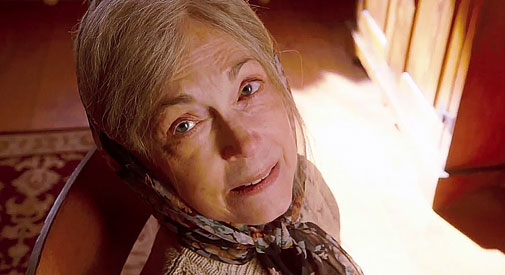 ‘The Visit’: A return for Shyamalan so the kids can see (way too much) of their grandparents

After “The Last Airbender” (2010) and “After Earth” (2013), films that did not see the north side of a 5 user rating on IMDB (out of 10), one might have thought M. Night Shyamalan done. A near one-hit-wonder with the clever ghost story “The Sixth Sense,” Shyamalan enjoyed limited successes with followups “Unbreakable” (2000) and Signs (2002), but for the man known for enigmatic eeriness and devilish plot twists, things took a drastic veer into the inept with the misguided “The Happening” (2008), in which photosynthesizing trees conspired to rid earth of man. 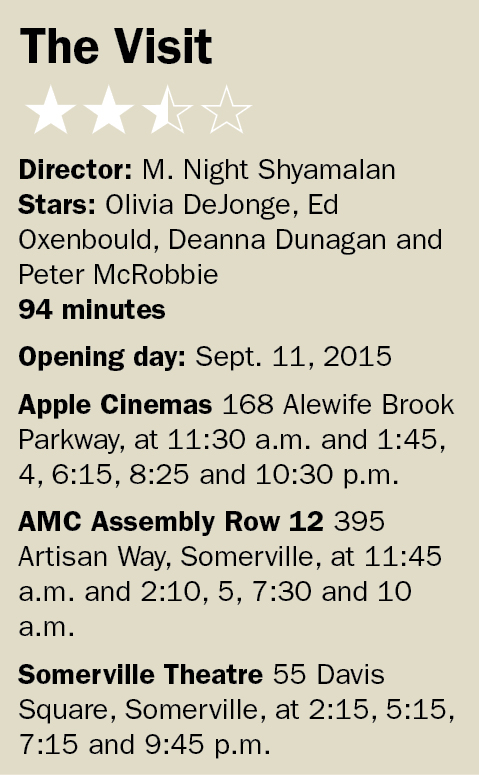 “The Visit,” Shyamalan’s latest, is a minor rebound of sorts. It’s laughably silly at times, but in a campy, good way – though I’m not convinced Shyamalan’s always in on the gag. One such curio is the old-timer named Pop Pop (Peter McRobbie) who shits his adult diapers and stores the accidents in the shed out back of a farm house in rural PA. Pop Pop and his Nana (a lithe grand-matronly Deanna Dunagan), while estranged from their daughter (Kathryn Hahn) who left home at 19 for an older man and winds up dumped and a single mother, get their first visit from the grandchildren in 15 years. Mom’s happy about this arrangement too, which lets her jet off on a cruise with a boyfriend who likes to enter hairy-chest contests.

The kids, 15-year-old Becca (Olivia DeJonge), who’s toting a videocamera to chronicle the epic family meet-up (think “Cloverfield” or “The Blair Witch Project”), and her younger brother Tyler (Ed Oxenbould), figure something’s amiss the first night in when they find Nana cruising the halls projectile vomiting. They’re told Nana sundowns and that it’s best to stay in their room after 9:30 p.m. Nana’s an odd one – she can bake up delicious goodies, but when roving the house at night or playing hide-and-seek with the kids under the house, she moves like something from “The Ring” or “Insidious” films, disjointed and pale with the hair draped across her face and all the vigor and speed of an attacking croc. Then there’s her naughty nakedness. Sometimes it’s just a left cheek sneak, other times it’s full-frontal freakiness.

The one thing that’s for sure is the kids are in peril, and grandma and grandpa are definitely not the two kind souls who caretake down at the rehabilitation center. The beauty of “The Visit” isn’t so much the concept, but the execution. Shyamalan seems like he’s back from a long vacation and in perfectionist mode. The ambiance is spot-on eerie and tense, and a huge up-sell of the flimsy undercarriage. The cinematography by Maryse Alberti (she’s filmed many respectables, including “The Wrestler,” “Crumb” and “Happiness”) is artily shot and lushly dark, elevating and sustaining Shyamalan’s staging. But the real key to “The Visit,” holding us rapt throughout, are the four principals. Becca’s the most off-the-shelf, but DeJonge manages to make her deeper than her labels. Oxenbould gets the juicer role as the less serious one, cocky and an aspiring rapper who decides to drop the word “ho” and four-letter words from his vocab and replace them with random female pop stars (“Katie Perry, that hurts!”). As Pop Pop, McRobbie is adequately grizzled and intimidating enough, but the real glue to “The Visit” is Dunagan, mostly a stage actress, who imbues Nana with soulfulness and genuinely creepy malevolence even when serving up a cookie or playing Yahtzee!. “The Visit” probably won’t register as a comeback hit, but it should bode well for what’s next for all the players on both sides of the lens.