If you would have aided Jews in Holocaust, end deadly inaction over Syrian refugees 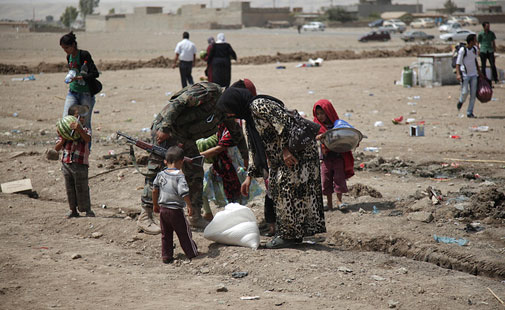 If you would have aided Jews in Holocaust, end deadly inaction over Syrian refugees

Have you ever said aloud, “If I were alive during the Holocaust, I would have helped the Jews”? If similar words have crossed your lips, yet you are indifferent to the Syrian crisis, you might want to rethink your stance on the Holocaust. More than likely, however, you are simply unaware of the scope of the problem in Syria, or what it really means.

When I closed my eyes to fall asleep last night, I imagined the masses of Syrian refugees walking in a great, snaking line, shielding their eyes against the hot, blowing dust, their faces scorched and baked under the blazing sun. As I drifted into a peaceful slumber in my comfortable bed, in my safe home, the vision slowly morphed into something else, something even more awful.

Two years ago, I visited Dachau, the concentration camp in Munich. Our guide explained how confused prisoners were brought into the first room for disinfecting, then taken to another room to disrobe, and a third room to “shower.” Of course the shower was actually a gas chamber, and it was the last room the prisoners would ever see while alive. After that, their bodies were piled in another room (aka the death chamber), and the process culminated with incineration in the last room, or crematorium. In my dream, I was again standing in the first room of the building that served as the primary location for the gassings and cremations. In my dream, the Syrian refugees were not walking across Europe in the blazing sun. They were walking through the halls and rooms of the Dachau crematorium.

The reality is, there is a great deal of support for the Syrian refugees. We can thank social media for that. During the days of the Holocaust, the hatred and greed was insulated from the “bewildered herd,” a phrase coined by Walter Lippman to refer to the general population. Today, however, human rights violations are often made public within minutes of when they occur. Millions of activists across the globe will do everything in their power to take action. Unfortunately, millions more will do the opposite.

Let’s start with indifference. The vast majority will be indifferent, humanity’s most passive form of violence. Many more will spread rich, fast-growth fertilizer over the hate by repeating cruel and ignorant lies about “those people” to their friends and children. Still more will type hateful, poisonous words on their keyboards and iPhones, words that will infect the minds of the “bewildered herd” and create more indifference, and more hate.

I have read the comments of thousands of people – and I’ve barely scratched the surface – who think these refugees are subhuman, that they are bringing diseases that will infect our children, that they are a swarm of locusts. They say things like “Get the gas chambers open before they kill everyone who is not Muslim,” and that it’s “too bad Hitler isn’t here, because he’d know what to do.” These words are not coming from some small, subculture of white supremacist groups or neo-Nazis. These are “regular” people, with regular jobs, raising regular kids, driving regular cars and, consequently, making hate a “regular” emotion.

Social activists and social media will prevent localized killing on a mass scale (such as the kind that occurred in the concentration camps), but it is likely that just as many will die. Activists can speak out against detention camps and human rights violations in specific areas by specific people. But that’s not how the vast majority of these innocent people will die. They will die at the bottom of the sea, or washed ashore after drowning because their boats were too full, and not seaworthy. They will die because they are too sick, or too old, or too young, and their bodies cannot handle the long walks, the hot sun, the lack of fresh, clean water, the lack of nutritious food. Some will die when they pass through pockets of violence, spurred on by people whose blind ignorance makes them fear the “diseases, violence and unemployment rates that refugees carry with them” wherever they go.

More than 200,000 Syrians have died while still within the borders of their country. Not only is the United States not innocent; we are also largely responsible for this bloody civil war. In addition to quietly fueling the conflict, we have undermined several opportunities for a ceasefire and have blocked various attempts at peaceful political transition.

Fifty years from now, when your grandchildren or great-grandchildren come to you with their homework and ask you to teach them about what will likely end up being one of the bloodiest massacres in history and – potentially – World War III, what will you tell them?

Will you tell them that you sat back and watched while millions of innocent men, women and children were killed?

Take a stand today. Write to congress and demand peace. Demand a ceasefire. Demand that the United States accept more Syrian refugees. Do this and you can tell your grandchildren and great-grandchildren that you used your voice to speak out against injustice in the world. You refused to turn your back on the suffering of fellow human beings.

You were a hero.

Amy Carst is a writer, speaker, social justice activist and world traveler who writes for several immigration attorneys and humanitarian organizations that support immigrant rights, such as the Center For Human Rights and Constitutional Law. She is also the founder of Bobo’s Coffee, a charitable coffee company that benefits programs in Uganda.