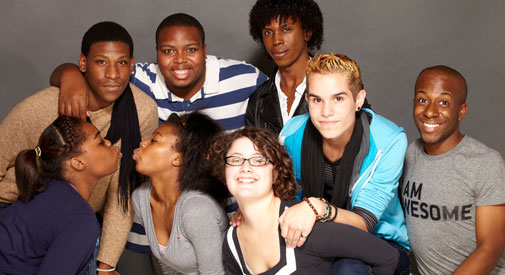 The independent film “The Year We Thought About Love,” which has been seen at film festivals around the world, comes to Cambridge for a free screening Thursday, followed by a Q&A with director Ellen Brodsky and cast members.

“The Year We Thought About Love” tells the story of True Colors, a Boston-based youth troupe that raises LGBTQ awareness by performing to middle- and high school students, social workers, friends and family. The film gives a look into what happens when LGBTQ youth of color dare to be “out” on stage about their lives and loves, including Alyssa, who has been kicked out of the house for coming out as transgender, and Chi, struggling with acceptance from a conservative Baptist church.

“Brodsky’s documentary shocks, awes and entertains [and] takes you from belly-aching laughter to a deluge of tears,” said the Rev. Irene Monroe, a Cantabrigian with a syndicated religion column and blogger at Huffington Post.

The film premiered at the Santa Barbara International Film Festival in January and has since screened at film festivals nationwide and in Canada, India, Japan and South Korea.

“The Cambridge GLBT Commission is very happy to be co-sponsoring this event,” said Aren Stone, the commission’s co-chair. “This film highlights an extraordinary local program that supports LGBTQ youth, especially youth of color. We hope that the audience will be educated as well as entertained by their stories, creativity and heart. ”

The free screening is at 6:30 p.m. Thursday at the Cambridge Main Library, 449 Broadway, Mid-Cambridge. The screening will be closed-captioned, and American sign language interpretation will be provided for the post-film Q&A. Doors open at 6 p.m. In addition to the commission, the event is sponsored by the City of Somerville’s LGBTQ Community Liaison and the Cambridge Public Library. For information, call (617) 349-3355 or click here.