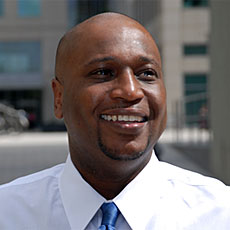 He began his public service as an intern at Joe Kennedy’s Citizen’s Energy, then served as director of constituent services for state Sen. Steven Tolman and as chairman of the Ward 2 Democratic Committee. He has served on the board of the Young People’s Project and of the Community Arts Center. As a founder of the Port Action Group, a neighborhood group focused on violence prevention, he led the effort to secure funding and institute a street worker in Area IV to help connect felons with services and resources. He has co-chaired the Kids Council and brought his leadership to the Neighborhood Safety Task Force’s Employment Subcommittee.

He is a recipient of the NAACP Education Excellence Award and the Cambridge Peace and Justice Award. He is a member of the Cambridge Police Commissioner’s Community Advisory Board and has organized and facilitated two communitywide conversations in the area of justice: “Civil Rights: Policing, Discretion and Race” and “Not Guilty,” a forum that examined police conduct in the Eurie Stamps and D.J. Henry incidents.

As a School Committee member, he has served as vice chairman and co-chaired the Budget and Contract Negotiations committees. His daughter is now at CRLS.

Compiled from the candidate’s statements in publicly available sources

Closing the achievement gap. No one supports diversity more than I, but I believe that each child receiving a quality education is the most important thing our schools can offer. I don’t believe that these principles are in direct conflict as long as we work diligently to make every school a great school. We should not have to choose between diversity and “good schools.” The achievement gap is often looked at as the difference in achievement between racial and economic subgroups, and so a lot of energy is placed on eliminating the difference between them – we should focus on everyone reaching proficiency. The most important thing is having excellent instruction in every classroom and real support for students with special needs to make inclusion in the classroom a reality. I will also continue the work I started to make our advanced placement classes more diverse and representative of our student population; the opportunities we have must be open and accessible to every child. Lastly, research supports the need for summer school to combat summer learning loss and provide an opportunity for accelerated learners to stay on pace. I have and will support summer school that is open to those who need it and to those who want it. Every child needs and education and, if we are doing our jobs well, every child will want to learn.

Supporting schools to be able to successfully support children with high needs. We need to find a way to make more programs available for families struggling to find suitable programming with the necessary support and know-how for students with special needs in out-of-school settings. Our system and our city should be able to do better. We must also provide resources for community building with new school populations, and make sure there are enough resources in place at schools to deal with social climate issues.

Parent involvement. I believe parents should be involved in all school-based decisions, including the budget. Parents also must be invited to the table to be invested in their children’s education. I believe that educating children in Cambridge is a 50/50 commitment between parents and schools. I believe Cambridge Public Schools must do more to engage parents in the schools and with the committee. To do the latter, we must take meetings out to the community and do a better job communicating information from the school system to the home.

Compiled from the candidate’s statements in publicly available sources

Harding is a very smart man, with obvious good management instincts. He is often direct, clear, and – refreshingly – gets right to the point in his statements during meetings. But he doesn’t do his homework. He often clearly has not read most documents before arriving at the meetings. Granted, he is one of two current members (with Mervan Osborne) who has a full-time job, but he has accepted the position and the (unusual) $32,000 annual salary. His position is that the committee should work at a “high altitude” – meaning setting broad policy and ensuring accountability from the superintendent and his staff – and is often sharp with some of his colleagues if they bring “retail” issues to the committee that he deems are inappropriately detailed. He is not above doing this himself, though, such as his motion requesting a rerouting of a school bus (admirable though his position was, he wasn’t playing by his own rules). Too often, he bases his positions on how much noise he is “hearing” from constituents, rather than considering the merits of the case. And despite his often fiery rhetoric that he holds the administration’s “feet to the fire,” he has not voted against any proposals from the administration in at least the past two years, while approving the superintendent’s contract renewals and raises consistently.