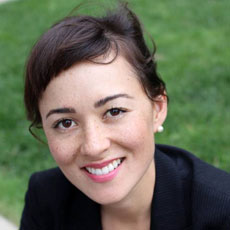 Davidson grew up in Hawaii with a single mother, coming to Cambridge to earn a master’s degree in urban planning from the Massachusetts Institute of Technology. She has served in Boston Mayor Thomas Menino’s administration and for open data efforts with the Commonwealth of Massachusetts and is now managing director of the Engagement Lab at Emerson College, a civic-focused new media lab. She describes herself as a community organizer, civic activist, renter and a year-round cyclist, and says she is “passionate about making our city more equitable and affordable. Government should serve us – not special interests.”

Davidson is running with the Slate for Cambridge with councillor Nadeem Mazen, council candidate Romaine Waite and and School Committee candidate Jake Crutchfield.

As a member of the Slate for Cambridge with councillor Nadeem Mazen and council candidate Romaine Waite, Davidson has agreed to promote himself for a No. 2 or 3 vote, and she is worthy of that at the least: She’s a progressive, youthful voice who reflects not just the diversity of the city but can help shape it – her degree is “in how to design cities that work for all people,” as she puts it. “I discovered that the way we build our cities determines our access to opportunity. The ZIP code we live is in one of the key factors in determining your life success – your housing, your transportation, your access to jobs.”

Like her slate running mate Waite, Davidson supports a directly regional approach to housing and linkage fees that would include discussion with Somerville and Boston to help raise a developer “linkage” fee that helps build affordable housing to about twice what the council recently approved.

She vows to fight for a $15 minimum wage, more affordable housing, protected bicycle infrastructure and “real community engagement — in person and online.”

As a candidate, it is encouraging to see how significantly more poised she became on the campaign trail, and so rapidly. A ferocious learning curve, diploma from MIT and devotion to public service forms a good résumé for a high-ranking council vote.