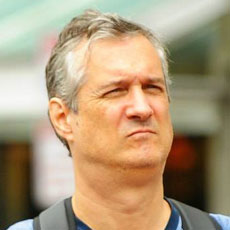 Dietrich and partner Kim Courtney came up against strong opposition last year from a potential competitor and seemingly from the License Commission itself when trying to open a wine bar and charcuterie in Mid-Cambridge, becoming radicalized and becoming civic activists. Dietrich and Courtney began attending and recording every commission meeting, as well as attending City Council meetings and those of other public bodies in Cambridge. The materials they’ve gathered – interactive liquor license maps and a comprehensive library of audio and video recordings of meetings – get posted as a resource for citizens and entrepreneurs. And they’ve met repeatedly with councillors, city managers and the police to suss out commission rules and talk about what went wrong.

Dietrich has lived in the Boston area since 1983, and in Cambridge for three years. He is a graduate of Rensselaer Polytechnic Institute with a degree in physics and has worked as an engineer in the semiconductor industry for more than 30 years. He does research on nonvolatile memory technology.

A free-market economy for small business to thrive in.

Dietrich didn’t turn in answers to a comprehensive questionnaire from the residents group A Better Cambridge rmeasuring his level of agreement with the group’s “smart growth” platform of development- and transit-focused priorities and goals. In the words of the group, “higher-rated candidates demonstrate a strong understanding of the complex housing and development challenges facing Cambridge [and] are best prepared to make Cambridge a more affordable and livable city for all residents, especially low-income families.” There is a maximum score of 45 points.

Neither Courtney nor Dietrich are afraid of hard work, obviously. They have turned much of their lives over to attending, cataloguing and critiquing public meetings in Cambridge through a filter of legal expertise and real-world experience. They have met with a staggering array of public officials in pursuit of their goals – clashing with some along the way – and have developed a good sense of how the system works, for good or ill.

It would be wrong to call them single-issue candidates, as their focus on city licensing, process, governance and transparency has broadened over time to include topics as wide-ranging as app-driven car services such as Uber and the very bedrock rules of how Cambridge governs itself.

During their candidacy, they have been generous to others running for office, making it clear that their mission is reform generally, rather than seats on the council themselves – they just happen to see getting seats on the council as the most efficient path to reform, as they’ve done some of the hardest homework themselves.