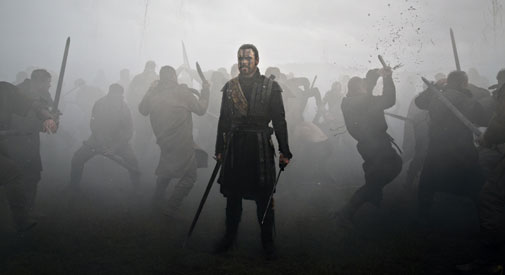 The ambitions of Justin Kurzel are similar to – and misguided like – the protagonist of his cinematic retelling of “Macbeth.” Best known for “The Snowtown Murders” (2011), a bloody coming-of-age drama based on true events, Kurzel seeks to ascend to a throne held by Welles, Polanski and Kurosawa, and he guts the bard to do it. 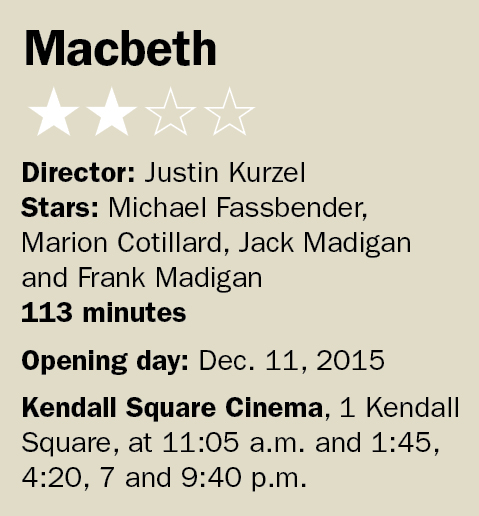 That’s not to say “Macbeth” is all a mess. It offers a rapturous staging of the battle of Ellon, righteous in its fury, and boasts two of the best and most interesting actors working in film today, Michael Fassbender and Marion Cotillard. But Fassbender, so alive with spit and rage in “12 Years a Slave,” feels muted here, lacking the enunciating articulation that Kenneth Branagh rebranded as the standard when as a young man he ingeniously resurrected “Henry V” in 1989. There’s a dull detachment that one could attribute to the amount of blood spilled at Ellon. The three scribes (a scribe for every witch) who adapt Shakespeare’s timeless tale of tragedy, avarice and madness (Todd Louiso, Jacob Koskoff and Michael Lesslie) imbue Macbeth with a son, who is gone before he even speaks during the opening carnage.

Perhaps this is the reason for the man’s descent into madness, which somehow becomes twisted into a paranoid ascent to the kingship of Scotland? It’s a novel idea that doesn’t get played out thoroughly enough, as much of the film falls into a bloody stupor with Fassbender looking far away and Cotillard’s Lady Macbeth, wide-eyed and teary, not quite driven by the blood guilt and insanity tradition has mandated. The film finds its liveliness mostly as Macbeth’s adversaries plot to undo him and the cruel murderous doings he does – burning a family at the stake or gutting his long trusted ally, Duncan (David Thewlis) with extreme prejudice – spurs their thirst for revenge.

For all the slick film-school craft Kurzel layer into the project, it’s sad that the bard’s snappy poetic language is unceremoniously culled. It’s there in pen, but falls limp from the tongue, sotto voce at times. Clearly Kurosawa, transposing the tragedy to feudal Japan with “Throne of Blood” (1957), took artistic liberties, but he had Shakespeare in his bones (he adapted several other of the bard’s plays to his samurai setting). Here, the merriment and rage conveyed in word is lost, and the tortured soul driven by prophecy and hubris feels less like it’s portraying a timeless human condition and more like an Enron plot to drive revenue.