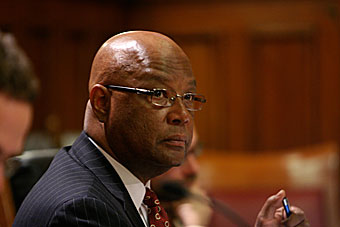 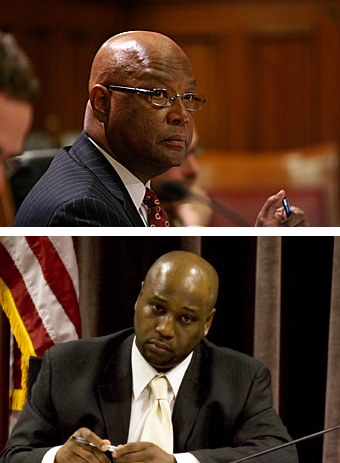 Ken Reeves, top, and Richard Harding have been named interim leaders of the city’s NAACP branch.

After a period of silence, the Cambridge branch of the National Association for the Advancement of Colored People has new interim leaders: former mayor Ken Reeves, now a visiting scholar at the Massachusetts Institute of Technology, and School Committee member Richard Harding.

They will replace an administration led by Kathy Reddick. Between leadership teams was a gap of several months in which the branch didn’t hold meetings and was unable to plan its annual Dr. Martin Luther King Jr. Breakfast, said Juan Cofield, president of the New England Area Conference of the NAACP. The regional group, which governs and coordinates branches in Massachusetts, Rhode Island, New Hampshire, Maine and Vermont, suspended the February event – a decades-old tradition – because Reeves and Harding would have “too short a period of time to do an effective job” planning it.

Reasons for the change in leadership were unclear, with Cofield promising clarification within a few weeks. There was internal debate over whether to release the Wednesday announcement, he said, “but there were so many people asking about the celebration that we felt we had to get something out.”

An association press release said Reddick had stepped down and credited her “able leadership [after] many demanding and successful years as president.”

Reddick has an unlisted telephone number and couldn’t be reached for comment Wednesday.

Cofield expected that Harding and Reeves, the interim president, would call for a meeting of the branch membership within two to three weeks. “I think Ken and Richard have it in mind to be holding regular meetings and getting back on the advocacy trail, and then looking to have an event that will draw people in rather soon,” Cofield said.

“We are certain that as these two leaders move forward in the cast established by Kathy Reddick, the Cambridge branch will continue to flourish for years to come,” Cofield said.

Reeves grew up in Detroit and graduated from Harvard College in 1972. He was elected to the City Council in 1990 and served until 2013 with three terms as mayor – 1992-95 and 2006-07. He was the first black mayor in Massachusetts, and the first black openly gay mayor in the country. Harding is a lifelong Cantabrigian who served on the committee from 2001 to 2007 and  rejoined in 2009.

The branch’s change in leadership meant a lesser role over months of nationwide social and political turmoil. A Black Lives Matter Cambridge formed in January 2015 and receiving recognition as a registered chapter of Black Lives Matter in June has held protests over an epidemic of black deaths at the hands of police officers, participated in marches, run community conversations and other education events, briefly shut down the year’s Honk! festival in Somerville to demonstrate for black trans people, organized participation in selection of the next school district superintendent and organized a debate for candidates in November’s election.

The same currents keeping Black Lives Matter Cambridge active has sparked new interest in the NAACP, Cofield said, but the Cambridge branch has been unable to respond.

“The demand on the NAACP has just mushroomed,” Cofield said. “We’ve all sort of become complacent and don’t think about advocacy until there’s something that disturbs or offends us, and then it becomes an issue we all want to do something about and take some action. So the NAACP has had a lot more calls and interest from folks who want to become members and/or to get actively involved. It’s an unfortunate time, but we are pleased about the level of interest and we want to be able to respond appropriately to people’s concerns.”