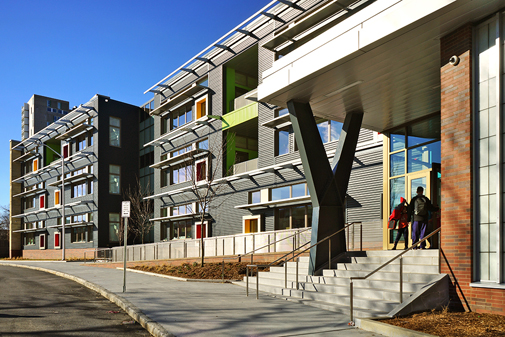 The Dr. Martin Luther King Jr. School complex that opened Dec. 21 cost the city $95.5 million to build and is only the first of at least three school construction projects. (Photo: Perkins Eastman)

The city has once again earned AAA ratings from each of the nation’s three major credit rating agencies – the best possible rating, and for the 17th straight year. While the number of cities with the same honor have been creeping up in recent years with an improving economy, Cambridge is still one of only about 36 communities in the nation whose finances won this three-part stamp of approval in 2016.

But in discussing the rating Monday with city councillors, City Manager Richard C. Rossi warned that the projects paid for by bond sales are getting more complex and expensive, and that the city needs to be increasingly choosy about which projects it pursues.

“At some point we will need a time out and put all this on the table and look at the future,” Rossi said, citing projects already being funded by bond sales such as infrastructure improvements including water and sewer separation, street and sidewalk repairs, information technology innovations and the construction of three campuses serving a half-dozen schools.

Cities pay for such projects by selling municipal bonds to investors. They’re considered reliable but unexciting and relatively low-reward investments, and Cambridge exemplifies that: Its finances are considered so reliable that its sale of $35 million in general obligation bonds March 1 will be paid back to investors with only 2 percent interest, said Louis Depasquale, the city’s assistant city manager for fiscal affairs.

Councillors were effusive in their praise for Rossi, Depasquale and others among city staff responsible for the solid finances, high ratings and well-run large capital projects – which councillor David Maher noted had all been overseen over the past three decades by Rossi, who is formally retiring from city management this summer.

The school construction projects are among the most prominent, as officials have noted that there are essentially no other communities in the state that have the ability to take on such projects. While the city planned to build on its own the $95.5 million Dr. Martin Luther King Jr. School complex that opened Dec. 21 on Putnam Avenue, there were initial hopes for state aid on the next two projects: The King Open/Cambridge Street Upper School & Community Complex on Cambridge Street, expected to cost $130 million and open in September 2019; and the Tobin School and Vassal Lane Upper School, which would then begin construction.

But the Massachusetts School Building Authority has resisted Cambridge’s bid for financial help on the later school projects, and the city went ahead anyway, noting the deteriorating state of the buildings and changing education needs. In mid-2013, one council cost estimate saw work on four school renovation projects stretching out to fiscal year 2046 – a longer lifespan than foreseen by the City Manager’s Office at the time – for a total $488 million, including $108 million in interest.

“We are reaching a point where we’re going to have to take a look at where we can go, because a lot of our projects now are 20-year projects because of the size,” Depasquale said Monday, referring to the length of time needed to pay off debt from bonding.

Rossi warned that “material growth” in city debt was cause for concern, along with a trend of municipal spending leading to “significant reduction” in reserve levels; potential deterioration of the tax base or weakening of the local economy; and jumps in pensions and other post-employment benefits.

These are not new sentiments – Rossi warned three years ago that the school projects could strain other city needs, saying “Something’s got to give” – but councillors in the meantime want citizens to be aware of the fortune of the city in being able to pursue projects such as the schools, in large part because of savvy fiscal management. “We didn’t have to drag people’s tax rate up through the roof, we didn’t have to have a referendum question like they had to do in Arlington and other places that pit families with school-age kids against residents who don’t have school-age kids over a property tax increase,” councillor Marc McGovern said. “We have the ability to do these things because of our financial management and bond rating.”

But Rossi, while acknowledging the gratitude and redirecting much of it to Depasquale and his Finance Department team, chose to stress the city’s need to set goals and priorities – in part through the three-year citywide master plan process that is underway with an emphasis on the potentially costly demands of reacting as climate change accelerates, raising temperatures and water levels.

“We want to really be smart about the future. We’re in a little bit of a mode where we say, ‘We can do this, we can do that,’” Rossi said. “I think about this all the time … we all have to be cautious in the future. You want to watch closely what comes into this planning in the future. I think some people may have the feeling Cambridge can do anything it wants. There is a limit, and that’s really what we have to talk about.”