‘Eye in the Sky’: Pulling trigger from above isn’t so easy with innocents in the scope 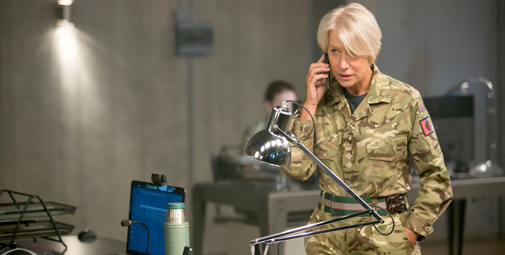 ‘Eye in the Sky’: Pulling trigger from above isn’t so easy with innocents in the scope

Gavin Hood’s taut treatment of a terrorist hunt gets at the complex innards of drone diplomacy as agents on opposite sides of the ocean debate the fate of potential collateral innocents in a time-sensitive strike opportunity. Writer Guy Hibbert and Hood – most known for the competent YA sci-fi adventure “Ender’s Game” even though he won an Academy Award for “Tsotsi,” the brutal portrait of a Johannesburg gang leader – create something that’s both intricate and delicate and ultimately best described as feeling like a fusion of stage play and spy thriller. 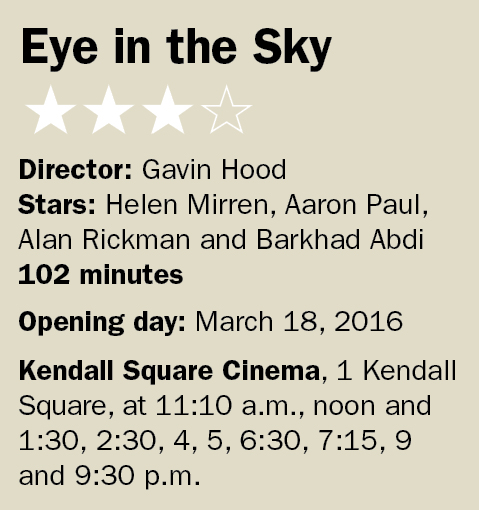 The action takes place around the globe, with the focus being a terrorist hotbed in Nairobi where the next wave of bloody disruption is being masterminded. In a dark and cavernous military post somewhere in England, Col. Katherine Powell (Helen Mirren) oversees Operation Egret, an effort to extract a young Englishwoman (Lex King) who has joined the Al-Shabaab terrorist group. Special Forces on the ground in Kenya sit ready to move in as a drone piloted by U.S. serviceman Steve Watts (Aaron Paul) from a cramped military facility in the vast Nevada desert watches from above. All hang on Watts’ feed while a local (Barkhad Abdi) maintains street-level surveillance with short-range animatronic drones launched from a parked van.

It’s a basic nab-and-grab gig, until the target leaves the house (in a shroud, so they can’t get a positive ID) and moves to a well-guarded compound akin to the one where bin Laden was taken. There a larger, immediate plot emerges to bomb a public marketplace – and the mission tips from a capture to a kill. In another, more sociable setting in England, Lt. Gen. Frank Benson (Alan Rickman, dignified and to-the-point in one of his final roles) entertains an assemblage of undersecretaries on hand to witness the takedown, but once the kill order comes down from Powell and Watts spots a young girl (Aisha Takow) selling bread within the blast range of his hellfire payload, a tangle of moral and political issues ensues.

For the most part “Eye in the Sky” unfurls a talky thriller with military protocol ever altering the course of action (change the bomb’s drop trajectory, rerun the collateral damage calculation) and a continual weighing of a mass killing from suicide bombers versus the political quagmire of knowingly taking a child. Of the lot, Powell is the most steadfast, but Watts and his co-pilot (Phoebe Fox), enlisted originally to watch and observe, enter a palpable crisis of conscience as the back-and-forth between higher-ups wears on.

Tight editing (there’s never any dislocation in sense of place while locale hopping) and well-framed shots hold the tension, as does Hibbert’s well-gamed chess match of statesmanship and foreign policy. Overall, though, it’s the performers – especially Paul, whose emotional nuance here will stun those who know him simply from “Breaking Bad,” and Abdi, who stole “Captain Phillips” from Tom Hanks (and was nominated for an Academy Award in recognition) – who bring the contemplation of rules of engagement in a high-tech, terror-filled world to a fitting zenith.

Early comparisons to “Dr. Strangelove” were far-reaching and undeserved, and Hood and Hibbert aren’t the first to delve cinematically into the far-reaching ramifications of drone warfare. Andrew Niccol’s “Good Kill” covered similar territory with Ethan Hawke as the pilot in a remote pod charged with high-altitude assassinations. In that film, the lonely process of video-game trigger-pulling was the main focus, but it ultimately wore thin without fully exploring the larger issues at play. Here, Watts and the nuances of his task are offset by Powell’s unflinching resolve and the circus of procedure-adhering personalities Benson labors to corral. The tense scenes of Abdi’s committed street operative entering the slum-surrounded entrenchment where the compound sits interject nuggets of physical action to a lot of political jockeying.

Overall, Hood and Hibbert’s film soars more than it drones, mostly by putting the viewer solidly in the seats of a multitude of players with wide-ranging agendas. Unsatisfactory, however, is that we never get at the ideological how and why of the young Brit being radicalized, or why Abdi’s local asset is so willing to go so far. Still, there’s a power in the subtlety of observation. You’re like the drone pilot right in the chaos, yet removed and safe; the hammer of god is at your finger to be dropped at any second – but as you sit and wait for the next order or instruction, your mind pulls out and your view begins to widen beyond the battlefield.