‘Green Room’: Unlucky punk band meets neo-Nazis who would kill for an encore 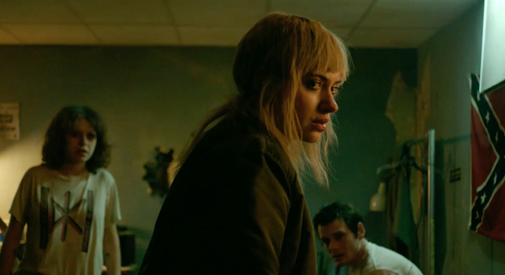 ‘Green Room’: Unlucky punk band meets neo-Nazis who would kill for an encore

It’s the skinheads versus the punks in Jeremy Saulnier’s viciously visceral film about a punk band finding itself in the terrifying clutches of desperate neo-Nazis. Remarkably ambitious and anxiously taut from its opening shots to its closing, the success of “Green Room” isn’t found in its jump scares or gore (although both are plentiful) but in its realistic approach to both. The protagonists in this film don’t transform into action heroes when moments get tough; they make stupid, clumsy mistakes, and they howl in pain. Saulnier inspires a tangibility, an overwhelming sense of dread because these characters are so vulnerably human. 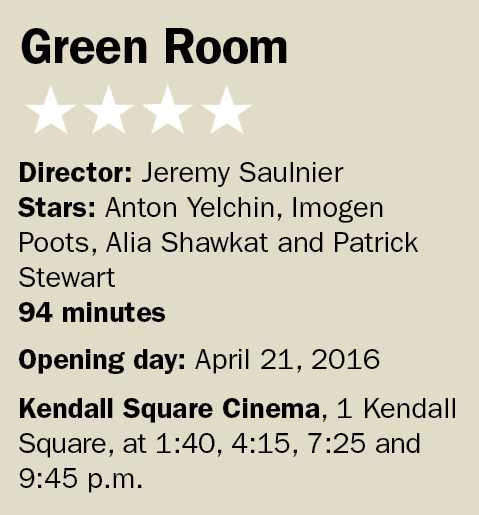 The members of “The Ain’t Rights” are just looking for a gig that will help pay for gas money to get home. Content enough to play for skinheads as long as they’re in and out of the club quick, members Pat (Anton Yelchin), Sam (Alia Shawkat), Reece (Joe Cole) and Tiger (Callum Turner) plan to keep their heads down and leave quickly after their set. But Sam leaves her phone behind, and when Pat goes to retrieve it he finds himself witness to a grisly murder, panicking the neo-Nazis into trapping them in the titular “green room.” Stuck inside with the friend of the dead girl, Amber (Imogen Poots), and the leader of the gang, Darcy (an imposing Patrick Stewart), on his way to deal with the problem, they’re forced to find a way to fend for themselves as the night slips further and further into a nightmare.

The ensemble cast is uniformly great, all giving their characters individual touches of realism that make the audience care about their well-being – ratcheted up quickly as we realize how the odds are stacked against them. Poots stands out, finally being given a role that challenges her after years of lying low in micro-indie films. Imbuing her character with a sinister, prowling walk and an uneasy grin that always leaves you wondering what side she’s on, it’s easily the best performances she’s given. Yelchin shines too, showcasing his particular brand of owlish vulnerability, his passive nature put in direct contrast with the violence surrounding him.

The film bleeds green, whether it’s in the overgrown cornfields and desolate woods where we first meet The Ain’t Rights, the overbearing and smokey hues that fill the club, or the edges of the screen that seem to sink inward, taking on a claustrophobic atmosphere, the trickling dread turning internal, the green leaching a sense of decay. Sean Porter does electrifying work with the cinematography, using the cramped environments to his greatest advantage, particularly in contrast to sequences involving the outdoors.

Saulnier has created a superb genre film – one that will cause the viewer to lie awake, reflecting on what they saw. Stewart’s Darcy looms as the story and gruesome visuals burrow their way under the skin. Despite the menacing nature of the film, it’s striking just how beautifully composed it is, and how wonderfully clever the script is. It’s not the typical slasher flick, concerned simply with gore and blood. Instead, Saulnier’s film compels the viewer to care, to watch in horror as The Ain’t Right’s find themselves in impossible situations. The audible gasps from the theater are telling – it’s not just the images (though they certainly play a part) but how the filmmakers went out of their way to create a compelling experience. “Green Room” may not be the scariest film a horror fan will see this year, but it’s the one that will leave a mark.