‘Swiss Army Man’: Friends can be life saver when feeling isolated, even if they’re dead 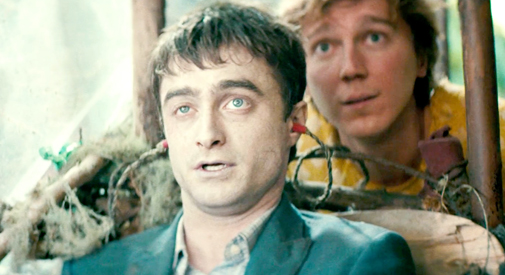 ‘Swiss Army Man’: Friends can be life saver when feeling isolated, even if they’re dead

Flatulence abounds in this surreal curio straight out of Sundance. I shit you not: Daniel Radcliffe, the fresh-faced lad who brought Harry Potter to life, plays a stiff (dead body) named Manny who washes ashore and ass-burps his way through the film, spouting more gas than lines – and yes, he talks. How’s that, you might ask? It’s a qualified answer, and one of the many enigmatic facets and WTFs of “Swiss Army Man” that, along with a limitless stale rush of methane, drives the film piquantly along. The film revels in its weird comic absurdity, never as existential or nihilistic as more high-brow fare such as “Waiting for Godot,” but it does feel freely mined from the cranium of Michael Gondry (“Eternal Sunshine of the Spotless Mind”) had he been locked in solitary with nothing but a stack of Mad magazines to pass the day. 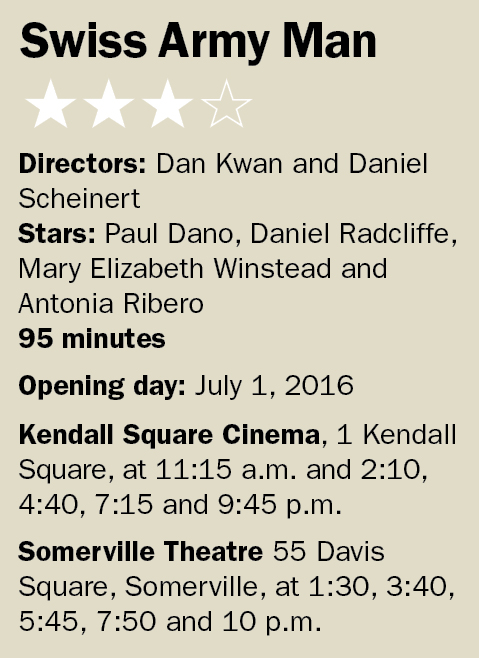 At its palpable core, “Swiss Army Man” is a buddy film, and a touching one at that, without ever submerging into the maudlin – though its arc could have been better tempered, given the myriad Sundance incubator labs it went through, ultimately winning the festival’s directing award this year. We begin with a nearly unrecognizable Paul Dano, bearded and grossly weathered by the sun and sea, as Hank, a man stranded on an island long enough to let loneliness consume him. Standing on an ice chest (ostensibly broken off from one of those waves of plastic atolls that float around the ocean killing whales, turtles and baby puffins), noose around his neck, he’s about to do the deed when Manny arrives in the briny surf. The sight of another fellow human gives Hank pause. Attempts to revive Manny just brings around gurgling gushes of gas and so – by sheer happenstance and using the noose knot as a tether – next thing you know, Hank’s jet-boarding across the ocean atop Manny, driven by sphincter propulsion.

How and why Hank gets marooned is never really explained. For a moment you might imagine a plane crash or a ship sinking, but that’s just a gnat of reason that gets swatted away as we move on to the main event that the two directors (Dan Kwan and Daniel Scheinert, music-video maestros referred to as “Daniels” in the hipster universe) have in store for us. And true to the film’s title, Manny has a million and one uses in ensuring Hank’s survival. Besides being fart-powered transport, he’s a cistern for water, his rigor mortised limbs can chop wood and projectiles blasted from his mouth have enough force to fell game. Then there’s the matter of his very active penis, but we won’t go there. “Swiss Army Man” ultimately becomes a strange hybrid of “Cast Away” meets “Weekend at Bernie’s.”

When Manny starts to talk we begin to learn who these guys are, and Hank’s clearly leaden with plenty of baggage he can’t shake (and perhaps existentially why he’s in the forested nowhere?) while Manny can’t remember much; he’s an ingenue of sorts who requires the definition of very basic human concepts such as “life” or “love.” He also falls for the toothsome woman who’s the background image on Hank’s iPhone (it’s at 10 percent when the film begins). The story behind that picture moves the action in pleasantly unpredictable ways, even if in whole, the Daniels don’t quite carry it through to its titillating promise.

The grave yet whimsical tenor of the film is echoed perfectly in the score by Andy Hull and Robert McDowell of the Manchester Orchestra, which evokes the tang of magical realism imbued in “Where the Wild Things Are” and “Beasts of the Southern Wild,” though what’s at stake here is more weighty and rooted in the earthly now. It’s asks much of Dano and Radcliffe, and they settle into their Crusoe and (dead) Friday roles with natural and genuine island-bro chemistry. Physiologically, Radcliffe, wearing zombie bluish white all over, is limited to jaw movements and near-epileptic seizures from those monstrous fart attacks. You can’t put a price on his ability to remain so rigidly in character, and who knew that key cinematically framed shots would feature Radcliffe’s bare bottom or a wayward erection?

The wonderment of Hank’s journey, his universal human condition and questions of his mental health ground the film, and the Daniels have tapped into something original and moving. In the end, though, one too many a sophomoric scat gag detracts from the film’s charm and the toil of craft two capable thespians pour in with sweat and gas.