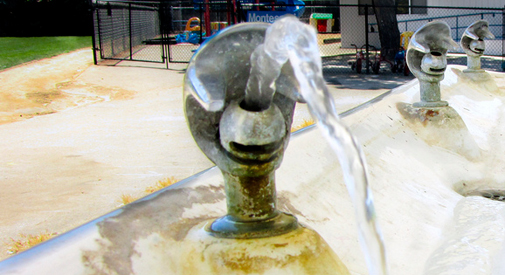 Most Cambridge Public School families got a letter this summer alerting them to newly discovered high lead levels in some campus water taps and faucets. During two weeks in June, the city did extensive testing of all school buildings, except for the Cambridge Rindge & Latin School and new Putnam Avenue Upper School/Dr. Martin L. King Jr. School building, which will be done in September.

Although annual testing of water bubblers has found no issue in the elementary schools for at least the past 10 years, said the district’s chief operating officer, James Maloney, this year they “decided to dig deeper” and look at all taps and faucets, partly in recognition that people are using more refillable water bottles and partly in response to “increased awareness about the issue of lead in water.” (Only CRLS has had problems with a “handful” of water fountains in the past, and they were replaced immediately.) Last year, the town of Flint, Mich., was found to have significantly high levels of lead in its water after state officials changed its water source without appropriate safeguards. The ongoing crisis and potential criminal charges have heightened the issue of lead-contaminated drinking water in many communities.

The Cambridge results, sent out with school-specific findings to families, show there were taps and faucets in most schools with levels of lead high enough to cause concern. Action is triggered if the lead in the drinking water meets or exceeds 15 parts per billion. The number of problem sources range from zero at the Haggerty School and one at the Fletcher Maynard School, to highs of 13 at the 359 Broadway building hosting the King Open and Dr. Martin Luther King Jr. schools and High School Extension program and 17 at the Kennedy-Longfellow building, which also houses the Cambridge Street Upper School. The offending taps were shut off and are being replaced this summer, Maloney said, when there will be follow-up retesting.

The good news, Maloney said, is that the quality of the water going into the buildings “is in very good shape. We believe it is likely about the faucets, and not about the pipework.” The age of the fixtures in some buildings is the likely culprit, as suggested by the randomness of the problem faucets within buildings – taps with problem readings were not clumped together in a building, but typically scattered throughout.

All faucets are expected to be back in service by the start of school, “though that may be optimistic,” Maloney said. Because of the number of replacements called for, the district has needed additional contracting support, which has been borrowed from within the city. “The Cambridge Water Department and our Public Health Department have been enormously cooperative.”

If the deadline to swap out fixtures is missed, the problem taps will not be in use, he said. If changing the fixtures doesn’t resolve the problem, school officials will continue until they find the source.

This level of comprehensive testing of every tap, faucet, cooler and bubbler that is a water source is “unprecedented,” Maloney said, but should result in staff, students and families knowing that any bubblers and taps in use when school starts have all fallen safely within Environmental Protection Agency standards.

The letters to families stressed that the testing was done at “worst-case scenario” conditions – first thing in the morning before running water through the tap – but families with any concerns or questions about the impact of these results on their child should consult a pediatrician.

School Committee member Manikka Bowman, who heads a Building and Grounds subcommittee, assured the public that she has been working with Maloney since the lead testing levels were issued. She, Maloney and incoming Superintendent Kenny Salim plan to schedule public meetings before the school year to address families’ remaining questions and issues.