Tax Day rally is Saturday on city’s Common, calling on Trump to release his own returns 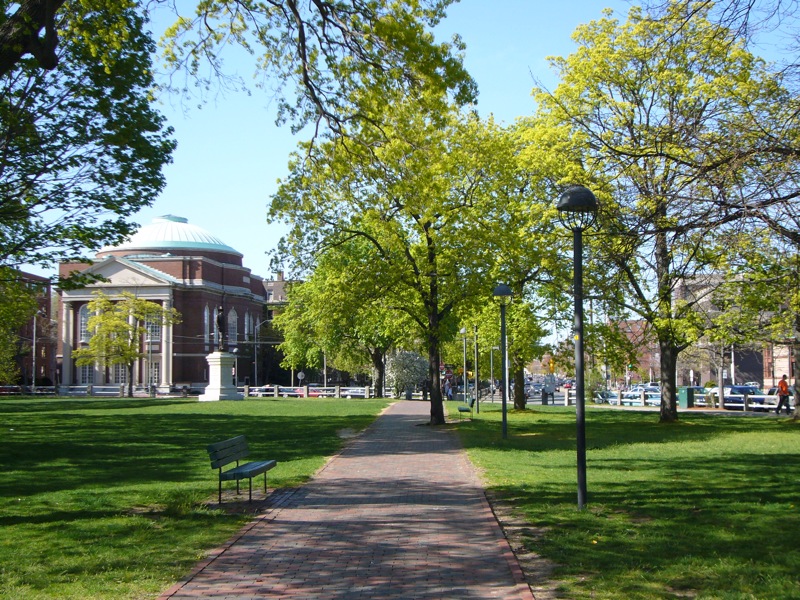 Tax Day rally is Saturday on city’s Common, calling on Trump to release his own returns

The fields of Cambridge Common near Harvard Square are hosting one of the 100-plus Tax Day marches planned for Saturday nationwide, which organizers say will express “outrage” that President Donald Trump hasn’t released his tax returns, despite promises on the campaign trail.

“The American people are outraged that President Trump has broken his promise to release his taxes, raising doubts and casting shadows over countless actions taken by his administration,” said Karen Hobert Flynn, president of the Common Cause organization, in a press release. “We have members all over the country who will be taking to the streets tomorrow to express their outrage and send a message to the White House that they are paying attention, they don’t like what is going on at 1600 Pennsylvania Ave. and they expect changes, beginning with the release of President Trump’s taxes.”

By all accounts excepting voices from the White House, the president owes a huge amount of debt to murky and potentially criminal Russian business interests. Cambridge economist David Warsh, in his Economic Principals column, touched on a reason the tax returns could be important in understanding the evolution of Trump’s views on Russia, a heavily armed intruder in politics around the world.

“This much is indelibly clear: The president has seen Russia as a prime source of revenue, if not investment, for 20 years,” Warsh said.

An incomplete set of returns – two pages of a single federal tax return from 2005 – was leaked to the MSNBC personality Rachel Maddow, who discussed them on air in March.

Tens of thousands of Americans are expected to attend the marches, Common Cause said, noting that every U.S. president since the 1960s “including Richard Nixon” has released their tax returns – though typically it’s done during political campaigns as a way to vet whether a candidate is worthy of office – “and none has had conflicts anything like Trump’s with his business holdings all over the globe.” Organizers at Massachusetts Peace Action believed the marches would draw activists from across the political spectrum.

Protests against Trump began immediately after his inauguration, with the next-day Women’s March drawing estimates of up to 4.6 million people taking part around the country and up to 5 million around the world. A flurry of other announced protests followed, none with the same level of participation, but Tax Day sees a new round of announced activism.

A March for Science is planned for April 22, which is Earth Day, to defend evidence-based policy-making on issues such as climate science. The local event is from 1 to 4 p.m. at Boston Common, with Massachusetts Institute of Technology and Harvard community members walking there from Cambridge campuses to take part. A People’s Climate March, identified as being for “climate, jobs and justice,” is planned for noon to 3:30 p.m. April 29, the 100th day of the Trump administration. Activities are again centered around Boston Common.

Goals of the rally

The Cambridge Common event Saturday has more goals than just the release of Trump’s tax returns.

Massachusetts Peace Action also wants “big corporations and people with very high incomes [to] pay their fair share of taxes” and for the government to redirect Pentagon spending and reset budget priorities. It plans to use the rally to ask the state’s Congressional delegation to vote for what it’s calling The People’s Budget.

“The Trump budget will bring tens of thousands of Americans to the brink. Cuts to health care, education, transportation and housing are not only cruel – the cuts are inhumane. Hard-working Americans can not and will not stand by as Trump reaches into their threadbare pockets to take more for the bloated military budget and wars in Syria and potentially North Korea,” said Cole Harrison, executive director of Massachusetts Peace Action and a coordinator of the April 15 Tax March.

The Massachusetts Alliance of HUD Tenants, the People’s Budget Campaign, the American Friends Service Committee and the New England Independence Movement are other organizers of the event.

It’s planned for 1 to 3:30 p.m. Saturday at Cambridge Common, near Harvard Square, between Massachusetts Avenue and Garden and Waterhouse streets.