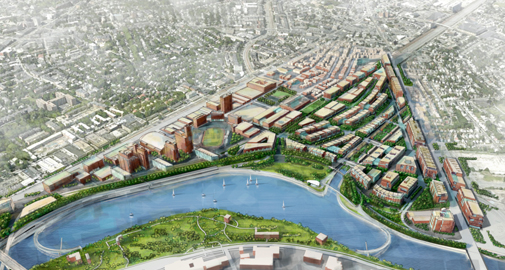 One concern: What kind of “destination” will revived park become?
By Marc Levy

Replacing an Interstate 90 viaduct across the river in Boston is expected to result in a dual-bank park including Cambridge’s Magazine Beach and a reclaimed Allston Landing.

Magazine Beach, the 15-acre riverfront park that decades ago drew 60,000 swimmers in a summer, got an official boost this week as city councillors made a request for municipal government to become a partner in its rehabilitation and “make a substantial investment” in the next phase of improvements and ongoing maintenance.

Whatever commitment the City Manager’s Office winds up making, the real value of the move is leading by example, said Cathie Zusy, who has been fighting toward reclaiming the beach since an initial cleanup in 2010.

“Outside funders have told us that it’s essential that the city and state have an agreement about going forward at the park before they invest. We’re hoping that this council order will move us in that direction,” Zusy said.

The city has already invested $1.5 million into the renovation of the playing fields and exercise area in the eastern part of the park, she said, and the state’s Department of Conservation and Recreation, in addition to matching four city disbursements with $2 for every city dollar spent, has been key in restoring the 1818 powder magazine building – with the help of resident fundraising. It’s been a crawl toward the current state of improvements, and the area still suffers from broken picnic tables and benches, a broken wading pool, no play features, sunken pavement and many dead or dying trees.

“Since DCR is terribly underfunded – it currently receives 30 percent less than its 2009 budget – it is essential that Cambridge lead the way if we hope to see improvements at the park,” Zusy said.

Over the years, the site has been a wooded estuary, gunpowder storage, a river bathing beach, a boathouse for rowers, a stormwater sewage treatment plant and a favorite picnicking and recreation spot.

The council’s order, written by Mayor E. Denise Simmons and vice mayor Marc McGovern and adopted Monday, said the land “has the potential of becoming a destination” again. That worried resident Marilyn Wellons, who said during public comment that she was “concerned what kind of ‘destination’ this would be seen to be” – such as one that strained area parking and transportation. People might want to “think three times about turning Magazine Beach into the kind of destination that would bring people from all over.” Resident Jeanne Strain, who said she’s been a regular presence at the beach cataloguing wildlife, also had warnings: The reclamation had to be done in such a way that it would remain a harbor for birds and other creatures as climate change threatened species with extinction.

The next steps for the beach include an expanded, accessible-to-all canoe and kayak launch, with construction to begin by June; demolition and removal of a broken wading pool this summer or fall; a splash deck to be open five months of the year, independently of the swimming pool, which is intended to be usable by this summer; and lighting and two accessible bathrooms going into the powder magazine building, ideally completed by fall.

Design for the western half of the park is almost complete, Zusy said, with construction “looking like it will happen incrementally over the next few years.”

“Got a million or two to invest?” Zusy asked Friday through the restoration effort’s email list. “We would much rather make improvements at once and not have the park be a long-term construction site. But we can only do this with outside funding.”