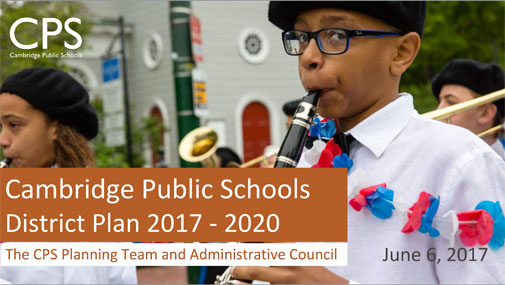 A school district three-year plan was presented this month. Click on the above image to see the plan.

Superintendent Kenneth Salim presented his three-year “district plan” to a variety of audiences in recent days, finding support f0r the broad, overarching concepts, but worries about the details.

Calling it “an audacious vision for the future of our students, schools, and districts” in his cover letter, Salim presented the draft as a culmination of a yearlong entry plan that focused on consulting with a huge array of stakeholders – including students, alums, families, staff at all levels, city personnel and leaders from local partnerships and business. The plan is a “roadmap,” he said, for work that will “transform” teaching and learning with a “focus on providing all students with the rigorous and culturally relevant curriculum, resources and programs they need.”

“The Cambridge Public Schools, in partnership with our families and community, will provide all students with rigorous, joyful and culturally responsive learning as well as the social, emotional and academic supports each student needs to achieve their goals and postsecondary success as engaged community members. CPS students and staff, as members of a learning organization engaged in a continuous improvement, will demonstrate a growth mindset and embrace risk-taking and innovation.”

The “rigorous, joyful learning” part was highlighted by district Chief Planning Officer Lori Likis, the facilitator of the planning process, who stressed the care taken in crafting the language. Everyone, she said, “talked about the need to do both of these things” – and Salim noted that joyful, rigorous learning has to happen for educators as well.

“We heard a lot of ‘Thank goodness joy is coming back to Cambridge,’” Likis said. But they also heard “loud and clear from many in our community … to be sure to really have rigor.”

“I think we’ve arrived,” member Richard Harding said. “I’m excited and look forward to watching and monitoring” the next steps, noting he particularly “love[d] that we are being intentional about providing targeted support” to struggling students. “I’m glad you’ve been bold.”

“We talked before when we were hiring you how none of us could understand how we hadn’t had a strategic plan,” Harding told Salim. “I’m glad that we’ve arrived at a place where we are working smarter, and hopefully harder.”

When a search to replace departing superintendent Jeffrey Young began in the spring of 2015, the committee spent considerable time debating whether to develop a district “vision” in time for it, as the last document that might be considered a mission statement was the 2012 Innovation Agenda. At one point, then mayor and committee chairman David Maher told members they were “paying [the superintendent search consulting firm] to do that for you.” But that firm, Hazard, Young, Attea & Associates, later told members that, actually, that is not in their job description and it is something districts typically have in hand before starting a search.

With Young on a one-year contract extension, the committee decided that creating a vision statement would be part of the new superintendent’s work.

“Beginning of the work” 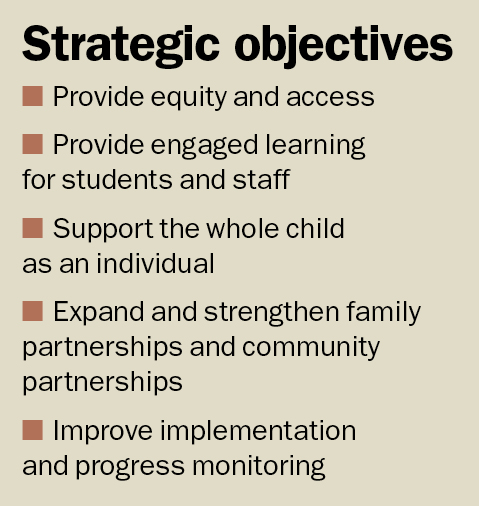 The plan is based on five strategic objectives, and each has several “strategic initiatives” to be launched in the next three years.

“It may seem like the end but, in fact, it’s the beginning of the actual work that will be done to make real these strategic objectives,” said member Patty Nolan, who with vice chairman Fred Fantini and member Manikka Bowman represented the committee on the planning team. The next step is to prioritize the 21 strategic initiatives and develop specifics, a big job.

For example, an objective to support the “whole child” has four strategic initiatives: implementing a prekindergarten to 12th-grade social, emotional and behavioral “learning framework and vision”; “developing and expanding effective inclusion practices in all classrooms through professional learning”; improving student engagement through in-class and out-of-class programs and mentors; and continuing to develop “multitiered systems of support for academic and social-emotional learning.” 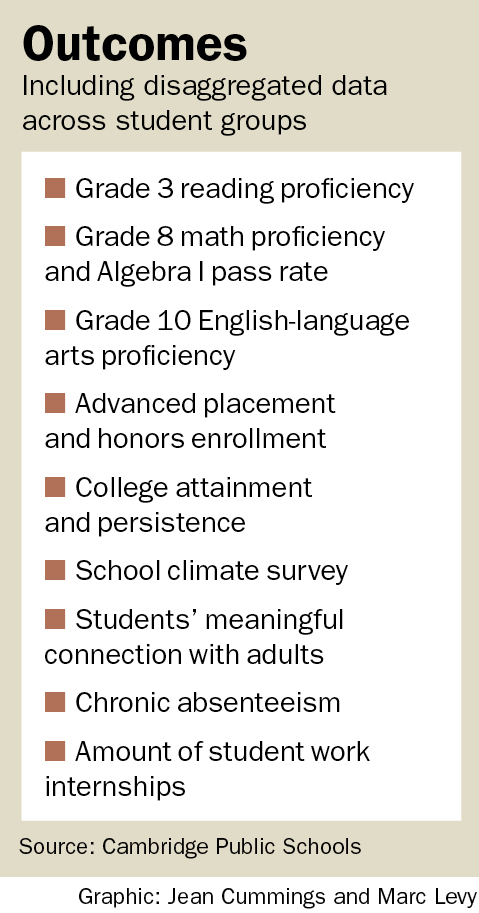 The other key element of the plan is a list of outcomes. Success can be measured, the team explained, because the plan will be specific about goals for different populations, such as race- and poverty-related achievement gaps and the performance of students with special learning challenges. Some methods of evaluation also need to be developed.

Likis and Salim stressed the effort put into making the plan streamlined and easy to read, which meant choosing words carefully. In the phrase “developing and expanding effective inclusion practices” in the objectives, they said, “expanding” was intended to recognize that there are effective best practices being used in some classrooms – a concept receiving little tangible support in recent years.

That slimming down of language, though, left some members worried about vagueness – that in such a tight document, the mention of one issue or measure could mean the absence of others that without an explicit reference could go unaddressed.

The vision statement includes “risk-taking and innovation” among its chosen phrases, though specifics are yet to come. The plan does not explicitly identify race, poverty, gender or special education issues, simply asserting the goal that “each” child will get what they need to succeed, members noted. Mayor E. Denise Simmons and member Emily Dexter worried about an over-reliance on MCAS scores, the only assessment mentioned, and Dexter wanted to see more goals related to educator preparation and diversity. (Specific population goals and alternative measures will emerge as the district moves through the next steps, Likis and others assured.)

The same sense pervaded town hall discussions. About 100 people turned out for the presentation and discussion at the high school June 13, including administration and some community members on the planning team. After an introduction on the process of developing the plan, the audience had three 15-minute breakout sessions with tables for each of the five strategic objectives.

It allowed for little conversation. With nearly 20 people crowded around a table, there was usually only time for two or three questions before people had to move on.

But certain themes did emerge. As with the committee, members of the public – overwhelmingly parents, with a couple of partner organization representatives – seemed upbeat about themes, but felt the real work was ahead.

“What’s not to like?” one person said. “I’m in favor of everything in this. But if this took a whole year, how long will it take to get anything done?”

Another was content with the timeline, saying that to get “buy-in” and make the plan meaningful, it was important to do it slowly and well. Salim’s presentation includes information on the enormous outreach by the district: the team included staff, educators, family members, partners, students and alums, and conducted discussions at school and student councils, town halls, educator and administration meetings, as well as conducting 57 interviews with specifically African-American, Haitian, Hispanic, Ethiopian and Bangladeshi families. There were five translators available at the town hall.

Many parents worried that their specific concerns were not explicitly present. Some parents of special education students were looking for more overt references; others looked for more detail on cultural proficiency; still others thought the needs of advanced learners were not in the document. Bowman also mentioned the lack of direct special education and advanced learning language at the committee meeting. But at the town hall, she explained to some people that some concerns were embedded across the objectives and acknowledged it was not obvious in the current draft.

Many others seemed confused and unsure what this plan meant in the classroom. “There is a fundamental difference between what we are talking about [at these tables] and what’s on the page,” another parent said. “I’m kind of lost. What is meant by ‘access’? What is a whole child, who defines it and how do we measure our successes?” There was talk at both meetings of developing a glossary of terms as a companion piece.

Salim pointed to five specific changes in tone from Young’s work that he hoped would frame his work ahead: a shift in language to have it be “more student-centered”; emphasizing the strengths of the students and district, not just “deficits”; thinking of students as individuals (using “each” instead of “all” students); separating family partnerships from community partnerships; and providing engaging learning for students and educators.

In many ways, though, it was the process itself that seemed to give most of the 32 members of the planning team optimism about the proposal. While acknowledging public concerns, these participants remained positive and visibly energized.

“It felt different,” Cambridge Rindge and Latin School teacher Janet Goldman told one break-out group. “It’s not slipshod.” She and others noted the intention to make changes across schools, grades and teachers and the breadth of audiences Salim included in his outreach, as well as his active presence at many of the meetings.

“It’s much more intentional,” Chief Financial Officer Claire Spinner agreed. “We are thinking in a multiyear way instead of through an annual budgeting process.”

“I’m excited about the next steps,” said Assistant Superintendent of Elementary Education Maryann MacDonald at another table. “We can’t do it all in one year. Next we will be prioritizing and identifying our specific action steps – I can’t wait to start that. People have been wanting this for a while,” she said, referring to staff and family members hungry for cohesive districtwide organization.

“If this process is a harbinger,” Nolan said, “if it’s the way we see us moving forward together, it means it will be different in the future.”