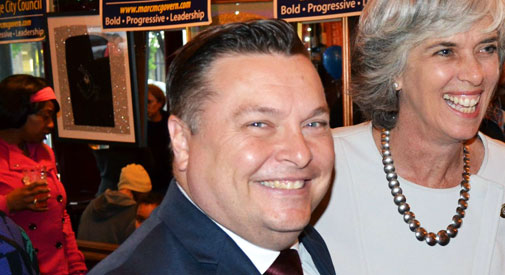 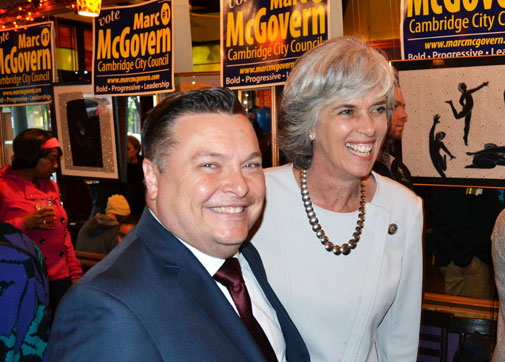 Vice mayor Marc McGovern with Congresswoman Katherine Clark during a May campaign event.

From the Marc McGovern campaign, June 21, 2017: It is with great excitement and enthusiasm that I officially announce my intention to seek reelection to the City Council. I am honored to have served as a councillor for the past four years. During that time I have met dedicated, caring, passionate members of our community and have been able to advance solutions on issues such as affordable housing, homelessness, income insecurity, immigrant rights and animal welfare. I am committed to continuing my work on behalf of all residents of Cambridge, especially those who find themselves under attack from a White House that appears determined to make life for our most vulnerable even more difficult.

From outside Cambridge it appears that everyone is prospering: Billion-dollar companies employ thousands, housing prices are through the roof, our median income is higher than the state average. But there is another reality: Eighteen percent of our children live below the federal poverty line, and when you adjust that number for the Cambridge security standard – what it costs to actually live in Cambridge – that jumps to 48 percent of our children living in financially insecure homes. On any given night there are hundreds of homeless on our streets and in our shelters. Last year we had 26 overdose deaths, up from 13 the year before. Our seniors are finding it more and more difficult to remain in our community.

This is not acceptable. If we are going to be the socially and economically just community we wish to be, we must do better. And I will not rest until every resident of Cambridge has the opportunity to thrive.

I’m running because Cambridge needs to be dedicated to achieving social and economic justice for every resident regardless of race, class, gender, sexual orientation, legal status or ZIP code.

I’m also running because I, as many Americans, crave progressive, common-sense leadership independent from what we’re seeing on the national stage. We are in an unprecedented time in our nation’s history – never before have we seen a president so determined to turn his back on so many, which makes it more important than ever that we have local leaders who are willing to resist and stand up against the hatred coming out of the White House. Cambridge, as one of the most progressive communities in our country, needs to lead by example. We need to have local representatives willing to push back and protect the most vulnerable in our community. This is a role I have played on the council and one I hope to continue to play, with voters’ support. Together we will continue to ensure that Cambridge is a leader for all people.

I love the people of this city. I love being able to help make their lives better. There is nothing else I would rather do than be in a position where I can advocate for Cambridge residents in need.

We are in one of the most divisive times in our history. Collaboration has become taboo. Although we must hold strong to our values and push our agenda forward, we must also be willing to work with others. How does this play out in Cambridge? Despite the majority of residents in agreement on major issues, we see a great deal of division when it comes to finding solutions to these issues. As a city councillor, I have taken a different approach. I have sat down and worked with various community groups, even those who have different views from my own. I have worked with every member of the council, from animal welfare work with Dennis Carlone to immigrant rights with Nadeem Mazen to supporting small business with Tim Toomey, early childhood education with Leland Cheung, zoning issues with David Maher, regulations for short-term rentals with Craig Kelley, environmental issues with Jan Devereux and dramatic changes in our affordable housing policy with Mayor E. Denise Simmons. You will not find a more collaborative member of the council during this time of division. I believe my record of working with every member of the council, as well as various community groups, sets me apart.

It is easy to talk about the things you wish to accomplish, but much more difficult to achieve them. Over the past two terms I have been a leader in the fight to address our affordable housing crisis. From collaborating with the mayor to triple the amount of money commercial developers must pay the city when they put up a new building, to again partnering with her to increase the amount of housing residential developers must provide the city to 20 percent from 11.5 percent – I didn’t just vote for these increases, I took concrete action to make them a reality. All members of the council understand that we need to do more to support our homeless population, but I made assertive moves to pull together the communities of Cambridge, Boston, Somerville, Medford and Malden to form the Metro Boston Homeless Summit and address homelessness on a regional basis. I acted decisively to push the city to develop a task force to address homelessness and allocate $250,000 in next year’s budget to open Cambridge’s first warming center to support the homeless during the winter months. When the White House attacked us for being a sanctuary city, and our undocumented neighbors, I created and ran a liaison of immigrant affairs out of my office. I then worked with the city manager to allocate funding in next year’s budget to make it an official city position. Concrete action requires assertive, decisive, collaborative efforts by council members – efforts I put forth every day.

We are at a pivotal time in our history. It is more important than ever that we have local leaders with proven records to ensure the welfare and safety of our communities. I am invigorated. I am determined. And I am asking for your support so that together we can continue to move Cambridge forward for all.

Thank you, Cambridge, for the opportunity to serve you.