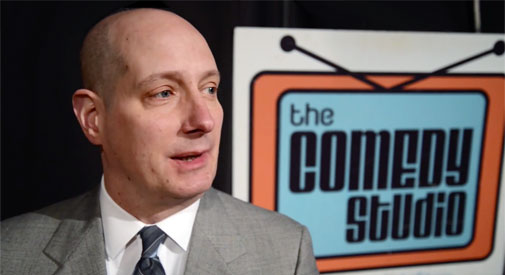 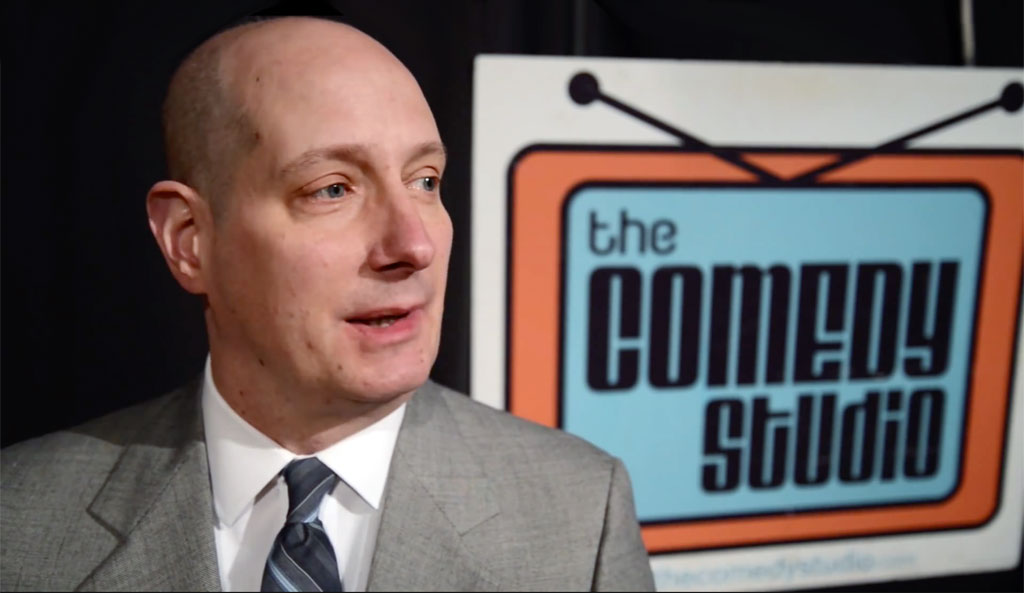 Rick Jenkins, founder and owner of the Comedy Studio, during a 2016 interview posted on YouTube.

After more than 20 years, more than 5,000 shows and uncountable numbers of comedians launched to fame or obscurity, the Comedy Studio is seeing out the year and then shutting down atop Harvard Square’s Hong Kong Restaurant. By that time, club founder and owner Rick Jenkins hopes to have found another home for comedians in 2018.

And it could be not just outside Harvard Square, but outside Cambridge.

“Now we start looking. We’re wide open, just looking. I think our reputation is so well known as a part of Cambridge and Somerville that I would like to stay there. But things are far from certain in this area,” Jenkins said.

Word came in May that the Comedy Studio was cutting Wednesdays from its schedule to run shows Thursday through Sunday only. In late July, Jenkins said the Sunday “Comics Workout Show” would end also.

The announced cause was rising rents at the Hong Kong, with Jenkins trimming expenses for negotiations with restaurant owners. Jenkins hoped to find a compromise that would keep the Comedy Studio operating up on the third floor, as it has since April 14, 1996 (though Sunday night shows actually started in March 1995, the Comedy Studio name hadn’t yet been attached).

But Jenkins said a rent increase was only “a small piece of it. It’s just that the Hong Kong could do so much with that room and we could do so much more with our own room that this seems like the best way to go about it.”

“If we hadn’t set a deadline, I probably would have just stayed. I need to grow a little,” he said. 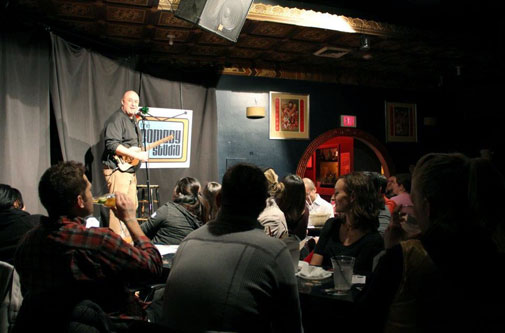 DJ Hazard performs a set at the Comedy Studio in 2012. (Photo: Kristen Sims via Yelp)

On less-crowded days of the week – with lower ticket prices – Jenkins has made it a point to bring more experimental comedy and brought newer comics to his small stage; on weekends, which regularly sell out days ahead of time and become standing room only, the big guns come out. The club is touted as “world famous” by Splitsider and a “one-of-a-kind stand-out institution” by The Laugh Button, and rates 4.5 out of 5 stars on Yelp.

Speaking from Los Angeles, where she’s a standup comic and actor, including in “Bad Santa 2,” Zigrino said the Comedy Studio “was my home club. I got to develop and find my voice there along with other peers. It was where I felt like I was on the right path.”

Because the third-floor space – which includes a bar, DJ booth and dance floor – is a part of the restaurant when not being used by the Comedy Studio, the club has faced tight time constraints on getting in and setting up, then breaking down and getting out after a show. It prevented the space from being used for anything but the nightly shows, and audio-visual equipment remained clunky because the space wasn’t the club’s to modify or update. “I’ve been talking to people in the industry, and there have been so many times where we could have recorded a CD or filmed a special – but couldn’t because of the time constraints we had there,” Jenkins said.

The ideal next club space will be around the same size at 70 seats, but be able to host classes, podcasts and other recording opportunities, he said.

Fleming, whose YouTube videos now get hundreds of thousands or even millions of views, was in Montreal for the Just For Laughs comedy festival when he heard of the club’s closing. “Though I was leveled when I heard the news, I’m sure Rick will infuse whatever new space with the same spirit of comedy and innovation that made the studio such a home for all us outsiders – such a magical place,” Fleming said. “But if Rick had to start a club in a Bank of America ATM vestibule it would still be the best club in the world. Nostalgia pain aside, I’m excited for what he brings for the next generation of Boston comedy.”

Denise Jillson, executive director of the Harvard Square Business Association, said in May that she was working to keep the Comedy Studio nearby, as its loss would makes the square “a little less interesting … We’re really trying to keep them here.” Jillson, on vacation, was contacted for further comment Thursday.

Back in Hong Kong

With confirmation of plans Monday from the Hong Kong, Jenkins began telling comedians what to expect. “I was just up at the Montreal comedy festival talking to quite a few people. Pretty much everyone wants to help my plan. They and I just need to know what my plan is,” he said. “As people know more, more talks and possibilities could come about.”

The Hong Kong was called for comment and a message was left with owner and manager Paul Lee. The Mystery Lounge comedy-magic show is expected to stay in the restaurant’s third-floor space, potentially moving to Wednesdays from Tuesdays, with the room otherwise being used for more parties and events.

Still, Jenkins said, the Hong Kong’s owners “were so good at getting us started, hopefully some other small arts groups can get started there now.”

The Comedy Studio is at 1238 Massachusetts Ave., Harvard Square. Its website is here; the website for The Mystery Lounge is here.