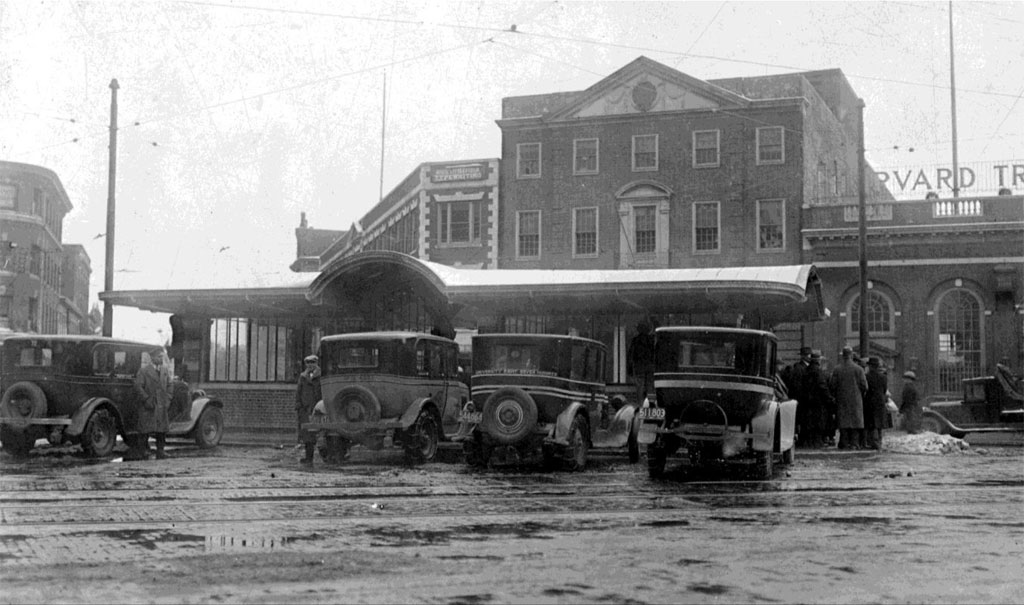 The Harvard Square kiosk in 1928, as a subway headhouse surrounded by taxis. (Photo: Cambridge Historical Commission)

The Harvard Square kiosk was unanimously referred for landmark status by the Cambridge Historical Commission on Thursday, which could help protect its look and architectural details as it becomes part of a $4.6 million municipal revamp of the square’s central plaza.

The commission’s landmarking study will be revised to incorporate several changes suggested by residents before approval, posted for review and ultimately forwarded to the City Council, with a couple of speakers urging that the language of the study be stronger about encouraging certain protections.

The building’s landmarking would date to its use as a newsstand starting in 1984, rather than to its origins as a subway headhouse in 1928. Changes to reflect an earlier era are still possible with commission approval, said Charlie Sullivan, executive director.

“The goal is to protect the building going forward as changes are proposed,” Sullivan said. “We cannot require an owner to change an existing condition or to backdate a building, but any changes have to be approved, and the changes can be approved with conditions that include inclusion of other preservation goals.” In this case, the city is the owner.

“We’ll attempt to incorporate missing architectural features where that’s appropriate and that at the very least will not further detract,” he said.

A controversial rendering of the kiosk from last year that showed broad windows and apparent LED lighting continued to be controversial, with Sullivan assuring meeting attendees it was not a “secret scheme” – though it did suggest how big a role windows played in the 500-foot structure at one time. “Now it is anything but transparent,” he said, and “the report recommends that the transparency be a consideration.” Still, the building would be designated a landmark as it stands, which includes the exterior magazine racks “if, by some chance, it continues as a newsstand.”

There was some dismay that the as-yet-undetermined use of the kiosk will decide its eventual look and the details of its preservation. A Wednesday meeting soliciting ideas drew a few dozen people who proposed everything from a performance space to a cafe to keeping it a newsstand, and the ideas continued to flow Thursday. Gary Mello, a recent candidate for Election Commission, said the kiosk would be “the best location for Massachusetts’ new early voting program, possibly even becoming a regular precinct.”

The commission is also preserving the right to install large signs atop the kiosk, though Sullivan said it would be applied to the installation of video screens, in case that’s the wish of the kiosk Working Group deciding future use. The idea has been raised repeatedly of showing video of public interest, such as presidential State of the Union addresses or Red Sox games, as once happened regularly in the front window of the nearby Cardullo’s gourmet shop.

Resident Tim Shaw delivered an eloquent argument for landmarking to the commission during public comment:

“I remember the kiosk when it was the subway entrance. I’m in Harvard Square for one reason or another almost every day, and I’ve seen many changes. But the kiosk has always been there. It’s a symbol of Harvard Square, it’s located in its very center. It’s architecture is unique, it’s design is compelling and evocative, and although it is small in proportion to the buildings around it, and and especially to the buildings to come, its human scale and exuberant roofline make it a perfect anchor for the central space … it’s small and simple, but a beautifully thought-out little building. It has stood for so long in such a prominent place and been witness to so many events large and small, and been an important part of so many people’s lives, that its historical significance can’t be doubted. Architecturally it represents a style and type of construction that functions perfectly but could not be built now. It deserves landmarking protection, and to its original design or as close as possible.”

“It’s known to millions around the world as a symbol of Harvard Square. If it is not a landmark, what is a landmark?” Shaw said.

Bruce Irving, chairman of the commission, did an informal poll of the meeting and found no one against landmarking.

“We know how solid the support is, and I think you’ll find similar feeling here” among commissioners, Irving said. “We take this building very seriously.”

The unanimous vote followed, with a timeline suggesting the landmarking recommendation would arrive before city councillors this month.

Some dissatisfaction remained, however, articulated by Suzanne Blier, a Harvard Square Neighborhood Association founder and architectural historian who has participated in preservation efforts locally and elsewhere.

“The CHC chose not to do what it is charged with doing: Set the specific criteria for specific features that are to be restored or preserved over the remaining life of the building,” Blier said.