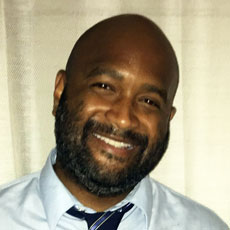 Laurance Kimbrough is a graduate of the Cambridge public schools. A lifelong Cambridge resident, he has also worked for the schools, including as a special education teacher, guidance counselor, tennis coach, and now has a kindergarten daughter and an infant son. He is a member of the city’s Police Review and Advisory Board.

Kimbrough invokes the memory of his father, Cambridge educator Leslie Kimbrough, as a motivation for his campaign. “If elected to the Cambridge School Committee, I will carry on my father’s legacy and strive to make our schools better for all students,” he says. “Around the time I was born, my father was demanding that the Cambridge Public Schools hire more educators of colors, even receiving death threats for standing up for his beliefs. I am confident that the Cambridge families and educators who have worked with both my father and me know that ‘the apple doesn’t fall from the tree.’”

A new direction for boys. In Cambridge Public Schools, boys are three times more likely to be disciplined than girls. Coupled with the fact that boys and men are far less likely to seek help or counseling, I believe we have a boys’/men’s health crisis that is affecting us all. The district needs to think differently about supporting the emotional health and development of the boys who will one day grow up to be men. And while these numbers are not unique to Cambridge, the Cambridge public schools should be at the forefront in addressing this national health crisis.

Improving achievement for all students through engagement. I believe the district has an engagement gap. Not enough of our scholars are fully engaged in learning within its schools because it is challenging, rewarding and personally meaningful. The kind of achievement I am interested in improving for all students is more value-driven and individual than anything measured by thick admissions envelopes, advanced-placement or honors classes, MCAS scores or grades earned. Can we measure achievement by how effectively schools and educators help students and families meet their own personal goals for academic success, improvement, engagement, character growth, moral development and community activism?

Black Lives Matter! During the 2015-16 school year, black students in Cambridge Public Schools were five times more likely to be disciplined and 3.6 times more likely to be suspended compared with their white peers. Black students made up 25.5 percent of the student population, while 40.2 percent were white. I believe our schools must be at the forefront of creating equity within our city and dismantling the legacy of white supremacy and white privilege within Cambridge, not perpetuating it.

Lift every voice – especially those of our most vulnerable. In Cambridge, we have a problematic tendency to give our focus, attention and people-power to the families who make the most noise. I believe this has created a chasm in the Cambridge Public Schools between the haves and the have-nots that leaves our city’s most vulnerable students and families voiceless. If elected, I will always speak up for those who have been rendered mute through years of oppression and discrimination. I will also work to create policies within our schools to ensure that all Cambridge Public Schools families have a voice – not only the “squeakiest wheels” who dominate the conversations.

The race to nowhere. Parents are increasingly placing more emphasis on preparing students to attend highly selective colleges and universities in hopes this will give them the edge to secure their futures in the “haves” category. Yet, as a parent, I believe that what we want most for our children is not only for them to be happy, but also for them to be engaged in their own academic growth. The desire for our students to do well in school for the sake of college admissions puts us on a race to nowhere, making learning a competitive battle with others rather than an engaging, fulfilling journey to figure out who we are, what our values are and what type of person we want to become. If we believe in social justice in Cambridge, education cannot be a competition in which we compare our kid’s success to that of our neighbors. We must put into practice the belief that all kids in our community and our school system deserve the best schools, the best educators and the best opportunity for personal fulfillment and success. I believe this is at the heart of a social justice education.

Other issues: Supporting the high school’s Leveling Up initiative to have all students take honors-level classes; working with city departments to create career pathways for students; and having all students pass the “Accuplacer” college placement test to ensure they are adequately prepared.

Kimbrough’s statement to the Cambridge Education Association is here.

Kimbrough is passionate about education and deeply affected and motivated by his family’s experiences in Cambridge. The work and actions of his father, brought to Cambridge as an educator in the 1970s in a concerted effort to increase teachers of color in the public schools; his experience as a student of color; his work in the district as a coach, instructor and guidance counselor; and his role as a parent of young children all inform Kimbrough’s motivation and insights. The combination of these perspectives into one person does make Kimbrough unique, though each of these experiences is shared by one or more other candidates. A major concern, however, is that in an October interview he said he had never seen a School Committee meeting. It’s like going to a job interview without reading the job description. The greatest compassion, vision and passion – which Kimbrough has – is not enough to make somebody a good committee member. There’s a big jump between that and what is even possible to accomplish on the committee. Being a member is a quite specific job, and his candidacy would be much stronger if he had learned what that entails.