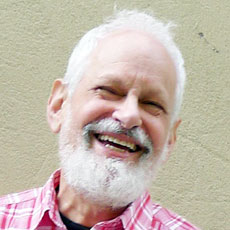 Lenke settled in Cambridge in 1968 and, with a small group of friends, launched the city’s first bricks-and-mortar food coop near Central Square while working as a home contractor and then as owner and manager of a moving company based near Fresh Pond. He and his wife have three children, who went through Cambridge Public Schools, and four grandchildren.

Provide Internet as a public utility. “We all suffer victim to overpriced, underperforming Internet, which is slow and expensive for no reason but that it is under the control of a for-profit monopoly whose government-subsidized and long-ago paid-for infrastructure and operating technology they inherited. They keep it needlessly expensive and absurdly slow.  This could be remedied by the flip of a switch.”

Listening to Lenke on the campaign trail has been frustrating. His answers to policy questions invariably began with a long, poetic preamble to the delights of the city and his fellow candidates that left little time for a substantive response. When given all the time and space in the world to lay out those answers – on his website – they are often little better.

The worry is that councillor Lenke might be no more able to form and articulate a message than candidate Lenke, which would be even more frustrating. He is correct in suggesting there are urgent needs to be addressed in Cambridge, but he has not been convincing in suggesting he is the one to do it.