‘First Reformed’: The reverend is in torment in a ‘Taxi Driver’ for a newly tormented era 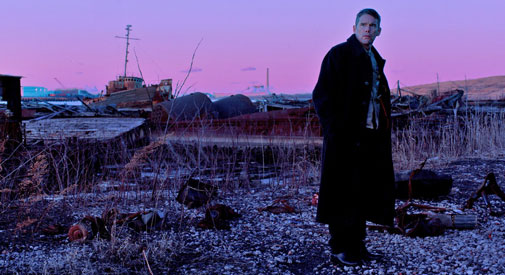 ‘First Reformed’: The reverend is in torment in a ‘Taxi Driver’ for a newly tormented era

In two of Martin Scorsese’s career-defining films – “Taxi Driver” (1976) and “The Last Temptation of Christ” (1988) – the protagonists (cab driver Travis Bickle and Jesus) are souls in torment and on the cusp of greater things that, to varying degrees, shift the civilized world as we know it. Both were written by Paul Schrader, a Calvinist-raised midwesterner who’s regularly shown himself a master as writer (“Raging Bull”) but something of a tormented soul himself as a director. With early hits such as “Blue Collar” (1978), “American Gigolo” (1980) and “Cat People” (1982) and intermittent wonders thereafter – “Affliction” (1997) and “Auto Focus” (2002) – Schrader has more recently scored a series of miscues – “The Canyons” (2013) and “Dog Eat Dog” (2016) – that have tanked critically and gone to the secondary market without the dignity of a theatrical release. 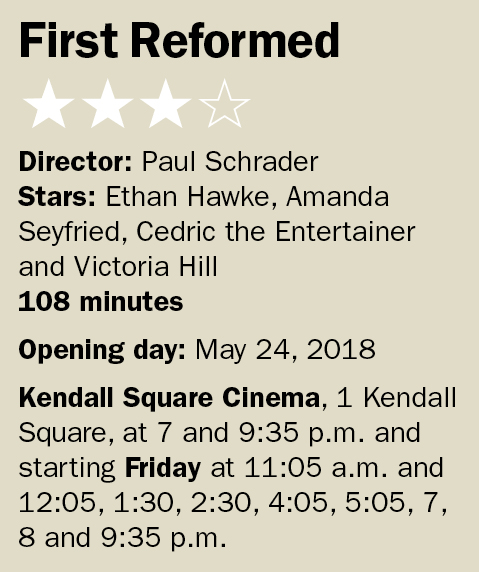 The good news is that Schrader’s latest, “First Reformed,” is something of a resurrection for the 71-year-old filmmaker, and an apt one; it revolves around a soul arguably more anguished than Christ or Bickle. The object of the title is a small, upstate New York church on the eve of its 250th anniversary. Tending to its diminishing flock is a reverend by the name of Ernst Toller (played with perfect restraint by Ethan Hawke, delivering his best work since “Training Day”) who’s clearly more lost spiritually than any of his flock. We learn early on that in the near recent past he’s lost his son to the war, and his wife abandoned him in the aftermath. Toller remains composed at the dais, but behind rectory doors he’s washed out, rueful and barely able to find solace at the bottom of a glass of bourbon. Smartly, he keeps the bottle hidden, but higher-ups at the parent parish (played with power and concern by Cedric the Entertainer) ultimately suss him out. How Toller finds redemption comes initially through purpose, when pregnant young parishioner Mary (Amanda Seyfried) asks him to counsel her troubled husband, who spouts eco-terrorism mantras and conspiracy theories – nothing like a drowning man trying to save another going under – and later, in the discovery of a suicide vest.

How all the threads in the tightly cloistered setting weave together becomes a brilliant orchestration by Schrader and perfectly executed by Hawke, who carries the film with soulful agony, his slate-blue eyes ever vacant and mouth half agape as Toller searches for wisdom and answers that never come. “First Reformed” was made on a budget of only about $3.5 million, and with its low angles and natural lighting poetically bears the accentuating sheen of a ’70s Grindhouse staple. Nods to film greats Carl Dreyer and Robert Bresson are evident throughout, namely Bresson’s 1951 effort “Diary of a Country Priest” (no surprise, as Schrader in the 1970s penned “Transcendental Style in Film,” a lovingly critical dissection of the works of the two auteurs – as well as Ozu) and in some of the final frames, echoes of Andrei Tarkovsky’s last film, “The Sacrifice” (1986). Much will be debated about the conclusion – and rightfully so – but the quest for purpose by one so dislocated and shaken remains profoundly, viscerally universal. You don’t have to have been raised with religion to tap into Toller’s plight; he’s being squeezed by his fractured conscience, grief and sense of faith while poked by powers with big pockets and agendas. He’s a pushed man at nearly the same crossroads Bickle found himself at 42 years ago.