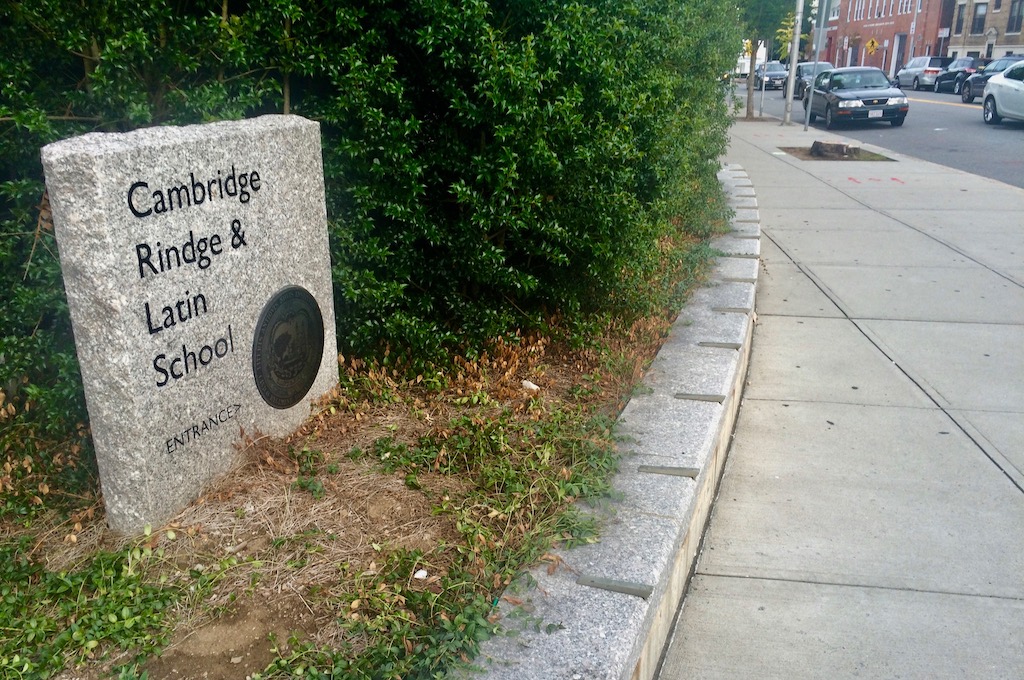 Two incidents of hate speech at Cambridge Rindge and Latin School have been reported to parents within the past week. (Photo: Marc Levy)

Incidents of hate speech have popped up at Cambridge Rindge and Latin School for the first time since around the election of Donald Trump as president in late 2016, officials said in emailed warnings to parents Wednesday and last week.

A “swastika symbol written with saliva” was found on a stairwell window at the high school at around 11:20 a.m. Friday, followed by the “discovery this morning of a handwritten note with offensive language threatening an educator of color at CRLS,” principal Damon Smith said in emails to parents on the days of the incidents.

Neither the content nor the recipient has been identified. Last month, the School Committee heard from students and others about the occasionally racially charged atmosphere at the school, with teacher and Black Student Union adviser Kevin Dua testifying about vandalism directed at their work and that a white teacher had called him an “N-word.”

Officials were asked Wednesday afternoon if they could provide more details about the incidents and insight into their timing than were included in officials’ emails to the school community. Police refused to describe the nature of the threat delivered to a teacher, citing the need to protect the student’s privacy despite no information about the student being requested.

Pressed for details, on Thursday police spokesman Jeremy Warnick offered this explanation of the threat: “A note containing a racial slur and nonspecific threat was found inside the classroom of [the] educator of color.”

“I am upset, angry and dismayed by this incident and last week’s display of anti-Semitism,” Smith said in his Wednesday email. “However, I am not afraid, and I believe in the members of our community despite these actions. As a community of students, staff and families, I know we remain committed to making CRLS an inclusive, welcoming and respectful community for all students.”

Superintendent Kenneth Salim sent an email Friday in which he called the swastika “an affront to our values as a community” and said he found it “particularly disheartening” that the incident took place during the festival of Hanukkah “and so soon after the toppling of the menorah on Cambridge Common.”

Salim later called the incident “very troubling from the standpoint of school climate.”

“We cannot speculate as to the motivations of the person who wrote the note, but we are certainly highly aware of the rise in incidents such as this around the country, and the impact this can have on a community,” Salim said.

In that Dec. 2 incident, witnesses said the communal menorah had been pushed over “with intent” by a perpetrator described as a young man on a bicycle. It became the 17th potential hate crime this year in Cambridge, with the new high school incidents pushing that figure to 19 and well over the average of 13 across the past 10 years, according to police. There was a spike to 25 hate crimes two years ago around the presidential election, including swastikas and “hateful language” found in three boys bathrooms at the high school over two days in December 2016. A a swastika had previously been found after the November election at the Vassal Lane Upper School.

Still, a majority of hate incidents this year are believed to have involved adults, not youth, Warnick said. There will be more details from the Crime Analysis Unit at the end of the year, he said.

The recent incident have been reported to Cambridge police and the school district’s Office of Safety and Security, which was coordinating efforts with police to investigate, Smith said. The superintendent added that the district is also in touch with leaders from other communities, as well the Anti-Defamation League and other experts on hate speech.

“When the responsible party is identified, appropriate disciplinary action will be taken,” he said.

He made the campus’ main cafeteria available after school on Monday “as a space for students and staff to gather and reflect” after learning of the Friday; with the new incident Wednesday, Smith said he was setting aside the “X-Block schedule” on Thursday for an official community conversation “about our core value and motto word, ‘Respect.’”

This post was updated Dec. 13, 2018, to add details from Cambridge police about a threat.