Lyfts, Ubers may gain ground in war on taxis, getting access to cab stands to pick up riders 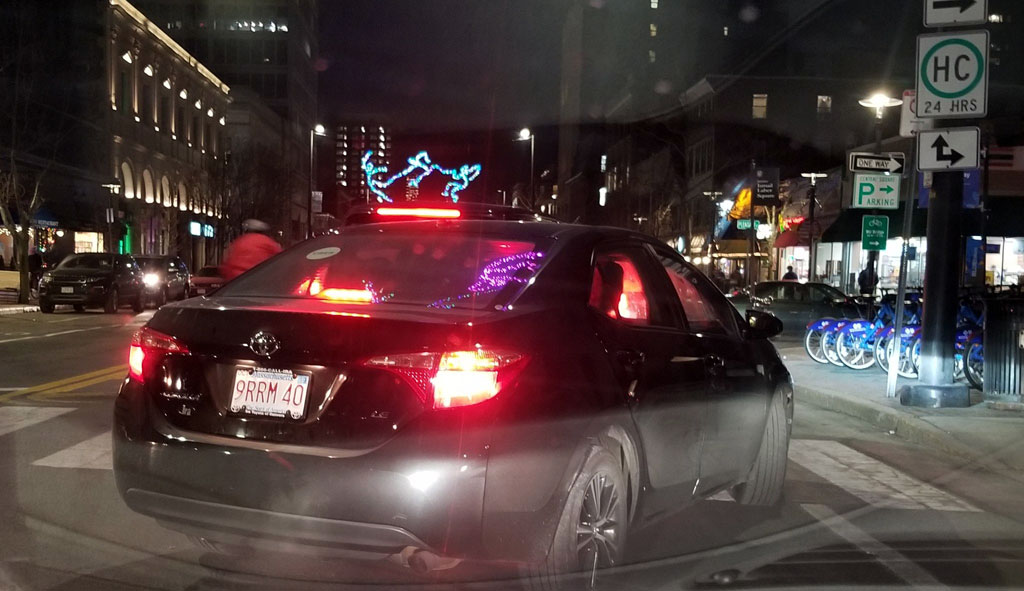 Lyfts, Ubers may gain ground in war on taxis, getting access to cab stands to pick up riders

An Uber heads east on Massachusetts Avenue into Central Square on Wednesday – traveling into a crosswalk against a red light, according to a tweeted complaint to the company from the Hill’s Handmades account. Click the image to see the original tweet.

Vehicles driven for services such as Lyft and Uber may soon get access to taxi stands in Cambridge, officials said Monday during a discussion of how to keep the cars out of travel lanes used by other vehicles and bicycles.

The city is already working with the two so-called “transportation network company” services to create pickup and drop-off spaces for drivers to use in busy locations, said Joseph Barr, director of the city’s Traffic, Parking & Transportation Department, at a City Council meeting.

Use of the taxi stands is being looked at too, but “obviously the issue of the impact of the TNC industry on the taxi industry is a sensitive topic, so we’re a little bit hesitant to just start moving [them into] taxi stands,” Barr said. “But I think you may need that curb access.”

Pickup spots began to be looked at in Cambridge in early 2018, around the time Somerville established spaces for Lyft and Uber pickups in Davis Square, but getting to the point of carving out spaces locally was “a question of bandwidth,” Barr said. Pickup spaces were added during the fall South Massachusetts Avenue project and “seem to be working well, here and in other communities, and we’re going to be working on expanding that.”

The car services have had a devastating effect on taxi companies, which struggle to compete with the simplicity of their apps and consumer prices kept artificially low by companies trying to capture market share. Taxi companies also pay for medallions that allow them to operate – once at prices inflated by rarity, now comparatively worthless. Traditional cabs have long suffered from complaints of inefficiency, racism and resistance to new technology, including drivers who insisted on cash long after riders turned to paying with credit and debit cards or by phone.

Barr was right that taxi drivers would be unhappy with the latest encroachment on their turf.

“Awful. Bad idea. That’s an awful idea. It’s just not fair to allow that to happen,” said a dispatcher for Ambassador Brattle Cab who declined to give his name. “It seems like the city is not helping the taxi industry at all. They’re allowing it to die and not even helping a little bit. It used to make money for the city and now they just don’t care about it – and it’s funny, because they don’t make a penny off of Uber.”

A state law levies a 20-cent fee on TNC rides, with half going to cities and towns, 5 cents for a state transportation fund and the 5 cents designated for taxis businesses to bring in “new technologies and advanced service, safety and operational capabilities” and to support driver workforce development.

Lyft and Ubers would only be sharing the taxi stand space for immediate pickups, rather then being allowed to wait like taxis do, Barr said.

But the Ambassador Brattle dispatcher, reached late Monday by phone, scoffed at the idea that Lyft and Ubers would give up stopping in travel lanes for passengers: “They don’t follow street rules as it is. What makes them think that giving them the stand is going to make them pull in to pick up and drop off?”

The dispatcher also predicted there would be problems as cabs and TNCs competed for space in taxi stands.

But one reason to introduce the idea in spots such as Kendall Square, Barr said, is that there is now “considerable amount of space devoted to taxis that is not being used.”

The state Legislature responded to the bad habit of Lyft and Uber drivers by passing a law in 2017 making it a violation to pause or park in a marked bicycle lane, police commissioner Branville G. Bard Jr. said in a report to the council.

“There has been a steady increase each year in the amount of time officers spend in addressing these violations,” with 1,495 bike lane tickets handed out in the previous fiscal year, Bard said. Still, it wasn’t known how many of those were Lyfts and Ubers.