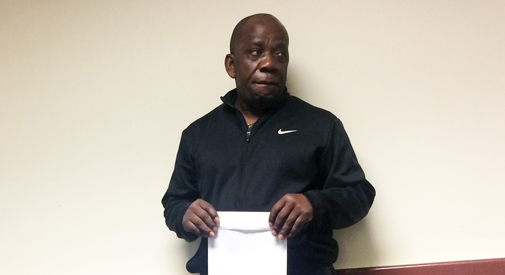 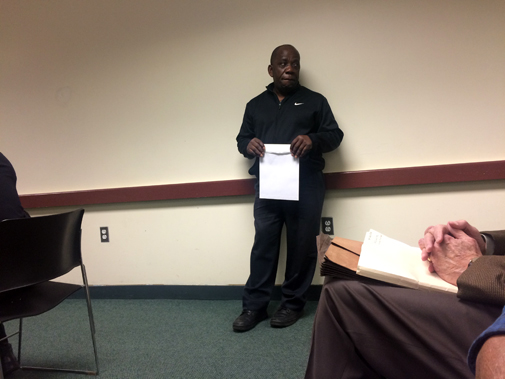 A taxi driver waits at a May 10 hearing of the License Commission to see whether moving violations will cost him his ability to earn a license. (Photo: Marc Levy)

The taxi industry, under attack from ride-hailing firms such as Uber and Lyft, is getting some regulatory relief in Cambridge, where the License Commission has come to owners and drivers with its own ideas to help level the playing field and is asking to hear their ideas as well.

Still, without equal enforcement of the laws, the industry will have a hard time surviving even if Uber soon goes bankrupt, as was predicted Wednesday by Martin O’Riordan, the senior vice president for medallion lending at Commerce Bank.

“Uber, to the extent they are at now, is a temporary phenomenon. They are losing money hand over fist,” said O’Riordan, citing widely reported losses of up to $3 billion last year, in part from a failed attempt to enter the Chinese market and paying deep subsidies to drivers to make up for underpriced rides. Uber also faces an antitrust class action accusing it of predatory pricing, with many of the taxi drivers and owners present Wednesday saying they were part of the class action.  “The more astute people say Uber’s got a year and a half, unless they can raise more money.”

In the meantime, Uber, Lyft and similar app-based, gig economy car companies – what are together called transportation network companies – are destroying the taxi industry not just by underpricing, but by not having to operate under the same rules or financial restrictions.

Some of the problem has been built into the law, as plainly marked taxis are watched over and ticketed by city police but Uber and Lyft cars that blend in with noncommercial vehicles are regulated at the state level. License Commission chairwoman Nicole Murati Ferrer had to remind taxi representatives repeatedly Wednesday of this separation of powers.

But drivers were also bitter over how the rules were enforced within the city. “An Uber driver can back right into you on Essex Street, but as soon as I do something, bam, there’s a cop to tag you,” taxi owner Bob Karasinski said.

Now that they’re waiting sometimes two and a half hours just to find a single fare, one driver said by way of example, they can go to a cab stand and find it packed with Uber and Lyft drivers who refuse to leave – then be told to move along by a police officer who says the taxi is blocking traffic.

Jeremy Warnick, director of communications and media relations for Cambridge police, said ride-sharing vehicles are subject to the same laws as any private vehicle, “and enforcement is conducted as such.” In that driver’s example, “if a ride-sharing vehicle were to park in a dedicated taxi parking location, they could be cited by the Cambridge Police or the Traffic, Parking & Transportation Department, just like you or I would if we were parked there in our personal vehicles,” he said.

One burden of being a driver with a city-issued hackney medallion, rather than working as a driver for a TNC, is a long-standing city rule that stripped drivers of their right to drive taxis if tagged with four moving violations within seven years. The rule wasn’t discussed at a January commission conversation about reforming taxi rules and regulations, but came up Wednesday when taxi owners and drivers were gone. The commissioners moved to change the rule to affect drivers who got four moving violations in four years.

But as with most commission reforms since the arrival of Murati Ferrer in January 2016, this one came with some mystery. Though the seven-year rule has been in place since before the current rules were approved in 2012, not a single owner or driver present Wednesday admitted knowing it when asked. Several said they thought the rule was for three moving violations in a single year. After the actual rule was brought to their attention, the next speaker asked commissioners about it, stumbling repeatedly over details.

Curiously, License Commission transcripts show few of these cases. After a single taxi driver’s case was considered in 2011, appeals of the seven-year rule jump ahead to April 12 – a gap of five years and 11 months – with two or three drivers pleading their case at meetings. “There’s a new commissioner,” explained Cambridge Police Officer Benny Szeto, who has overseen the background checks for several years, referring to Murati Ferrer. “She wanted them to go to a hearing.”

Previously, drivers would appeal privately to the commission’s executive director, Elizabeth Lint, though they always had the option a final public appeal, the chairwoman said. It was an avenue apparently not taken for nearly six years.

Donna Blythe-Shaw, who stood in as union representation for Cambridge taxi drivers for several years until her retirement in 2016, said she hadn’t heard of the seven-year rule – also in use in Boston – being applied in Cambridge. “It’s interesting that Cambridge is now picking it up,” she said. “The question is why now.”

Most of the driver appeals have been successful, with commissioners granting a renewed hackney license with a promise of no new moving violations within the next year.

The commission is taking a number of steps to make the taxi industry in Cambridge nimbler, including eliminating the “taxi school” that became mandatory for new drivers in 2010, the need for a driver to train under another driver before getting licensed, redundant mechanical inspections, elimination of rules about branding, meters and even whether there must be a partition between driver and customer, the demand to approve lease agreements and whether a holder of a hackney license can drive for Uber and Lyft as well.

“Why do we want to tell people where they can and can’t work?” asked commissioner and interim police commissioner Brent B. Larrabee in January.

The rules are “very heavy on red tape, and contradict each other in some places,” Murati Ferrer said at the time. “I wanted to look at them and modernize them, get rid of some of the red tape,” giving taxis more flexibility “so they can cope with changing times.”

“This exercise shows we’re committed to helping the taxi industry,” she said Wednesday.

But the changes may be too little, too late. Owner packed the commission meeting room to describe their inability to find drivers to work for them and the collapse in value of their hackney medallions as riders flocked to cheaper, flashier – and less regulated – services. For some, seeing $400,000 medallions drop in value to nothing means they have nothing on which to retire.

The result is that of the total 270 taxi medallions issued for use in Cambridge, the commission has 67 of them in its offices going unused – with another being ceded publicly Wednesday as Archange Toussaint, who has driven for nearly three decades and owned a medallion for a quarter-century, opted to simply walk away. Now there is no demand for the medallions, and taxi owners asked the commission to keep them off the market. “The fewer medallions there are on the road, the better chances there are we’ll survive,” Karasinski said.

Owners applauded a proposal that Cambridge buy back their medallions, paying for them with fees taken from Uber and Lyft drivers. Some thought the city could help them gain a technological advantage such as the ride-sharing businesses have with their slick apps.

Meanwhile, lenders to the industry are finding themselves scrambling to help owners, cutting deals to keep medallions on the road where they can be making back some portion of the money invested in them, said Peter Klein, a lawyer with New York-based Progressive Credit Union.

“It’s almost similar to the mortgage foreclosure crisis of 10 years ago. Everything is upside-down, and we’re trying to figure out how to get guys to make payments on their balances and keep them out there on the road,” Klein said. “I believe we’re all on the same page. We all know the unfairness of the situation.”

But not everyone is being so helpful.

Murati Ferrer said she contacted leaders in communities surrounding Cambridge to see if they would agree to reciprocity for the city’s cabs – so a driver delivering a passenger to Somerville could pick up a Somerville passenger coming back, and vice versa. The rules now prohibit a Cambridge taxi from picking up a fare anywhere but in Cambridge, making many of their trips money-making  in only direction. Ubers and Lyfts have no such restriction.

“We got a very strict ‘no’ from every municipality,” she said.