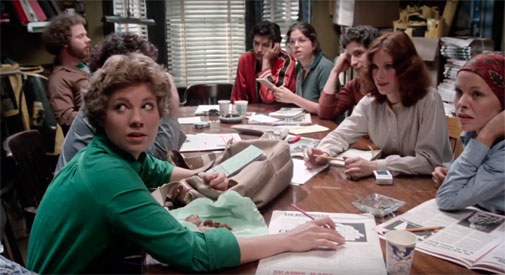 Spring is here, buds are blooming, schools are graduating and reunions tag along. Over at the Brattle Theatre, Reunion Week kicks off Wednesday with “Pulp Fiction” (1994) and “Murder My Sweet” (1944) and runs through May 29, ending with George Cukor’s classic 1944 psychological thriller, “Gaslight.” The films are lined up to match with major Harvard reunion classes – 25th and 75th.

Before that all kicks off, there’s a reunion offering of sorts for scribes of the Boston Phoenix (I’m one); through Monday the Brattle’s playing a remastered version of “Between the Lines,” the plucky 1977 comedy that followed the exploits of a Boston alt-weekly in its waning days of independence. The script was written by former Phoenix writer Fred Barron and boasts some great shots of old school Boston, even if all the angles don’t work out to be authentic (some of it was shot in New York, and Back Bay seems to be Cambridgeport). Jeff Goldblum and John Heard star in this biting social commentary from early indie pioneer Joan Micklin Silver (“Chilly Scenes of Winter”). At sporadic Phoenix reunions in the five years since the demise of the long-running underground paper, the film has been shown on barroom walls; with beer on tap at the Brattle, everything needed is served up in broad and clear nostalgic focus.

The jewel of the Reunion Week lineup form this cineaste’s POV is the Thursday night pairing of “The Wild Bunch,” Sam Peckinpah’s 1969 western that change how violence was orchestrated on screen, and Quentin Tarantino’s 1994 retro-hip, nonlinear narrative “Pulp Fiction.” The former, a ballad to the dying ways of the old west as World War I winds up, revolutionized how action films were made, employing multiple cameras at different angles to shoot a single scene – and often at different times. The hyperkinetic editing and suspension of time elongated single bullet shots into minutes-long visual poetry of testosterone and agony. Scorsese, Coppola and Tarantino have all credited the film with opening doors. The cast of Willam Holden, Ernest Borgnine, Ben Johnson and Warren Oates is one of the best put out on a prairie. It’s my favorite western because of the staunch code of loyalty and ethics employed by men outside the law, and for the amazing mingling of eras – German military officers, the onset of World War I and the first use of airplanes are all factors in small but haunting ways.

There’s not much to add about Tarantino’s magnum opus, so popular over the years and buoyed by dialogue so sharp and witty it’ll be quoted with glee by the grandchildren of millennials. The film minted Samuel L. Jackson as a force, gave new life to the careers of Bruce Willis and John Travolta, and rewrote the playbook on how style could win out easily over substance. The whole L.A. neo-noir hangs on a McGuffin and ends where it begins – probably the most creative use of a time rewind since “Rashomon.”

Other intriguing staples on the Reunion slate include Spike Lee’s “Crooklyn” (1994), the one-and-done Bond classic “On Her Majesty’s Secret Service” (1969) – watch out for that snow blower – and “The Italian Job” (1969) starting Michael Caine and a bevy of original Mini Coopers. The small, tucked-away gem in the impressive line up is Guinevere Turner’s groundbreaking 1994 lesbian romance, “Go Fish.” It pushed social boundaries back then and remains poignant today.

Information and tickets are at brattlefilm.org.