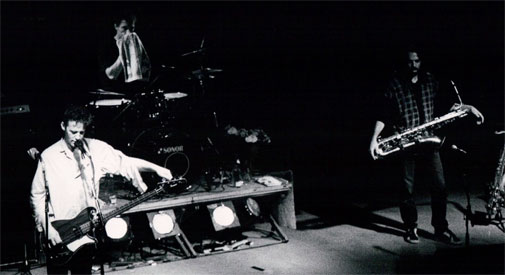 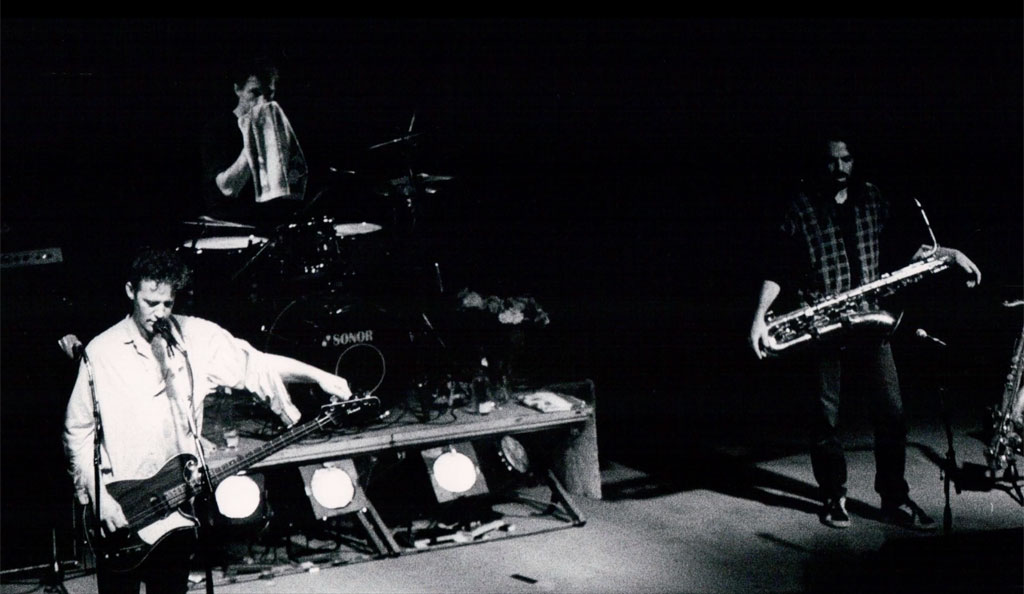 Morphine, with Mark Sandman at left, between songs at an early gig in a still from Mark Shuman’s 2015 documentary, “Morphine: Journey of Dreams.”

Tickets sold out within hours for two shows bringing together more than a dozen Morphine players on July 5, marking the 20th anniversary of frontman Mark Sandman’s unexpected death during a rock festival performance in Italy. Organizers said a few $25 tickets will be available on the night of the shows, taking place at at the Lizard Lounge.

Sandman and Morphine bandmates Dana Colley, Billy Conway and Jerome Deupree created their own category of rock called low rock, made all the more sinuous and seductive by its deceptive simplicity: The band’s 1993 debut, “Good,” was performed mainly with a two-string slide bass that Sandman invented, percussion and Colley’s rocking of baritone and tenor saxophones, sometimes at the same time. Each of the four studio albums that followed expanded on the sound without leaving it behind, even as Sandman experimented restlessly with side projects.

His enduring impact on the scene is why there’s a Mark Sandman Square in front of The Middle East, a 2015 documentary and why offspring band Vapors of Morphine remains a draw at Atwood’s Tavern – and when returning explicitly to the Morphine catalog, such as for a 25th anniversary play-through of Morphine’s “Cure For Pain” (1993, close on the heels of “Good”) at the Lizard Lounge.

While the Lizard Lounge is a small venue for a show with such audience demand – the “Cure For Pain” tributes were packed as well – it was the natural place to hold it. The show came about because Mike Rivard of Club d’Elf suggested giving up a Lounge residency night that he noticed was only two days after the anniversary of Sandman’s death. And the club was a favorite of Sandman’s.

“Mark Sandman/20 Years Gone/A Musical Memorial” brings together 14 announced performers – including a reunion of the Hypnosonics side project and bandmates from Vapors Of Morphine – as well as surprise guests. Along with Colley, Gershon and Tom Halter on horns; Deupree and Larry Dersch on drums; Rivard, Jeremy Lyons, Jimmy Ryan and Duke Levine on strings; and Evan Harriman on keyboards; there will be singers including Ali McGuirk, Christian McNeill, Ron Murphy and Monique Ortiz, returning from her 10-year home of Austin, Texas, for the show. (Conway and Laurie Sargent, who formed Twinemen with Colley after the death of Sandman, relocated out of state and are not scheduled to appear.)