From ‘Bill’ to ‘Basterds,’ Brattle rewinds Tarantino greats before his latest opens 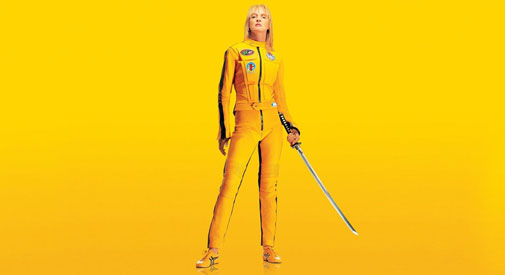 From ‘Bill’ to ‘Basterds,’ Brattle rewinds Tarantino greats before his latest opens

Adding to anticipation for Quentin Tarantino’s ninth film, “Once Upon a Time … in Hollywood,” which opens here July 25, The Brattle Theatre kicks off a mini retrospective “El Mundo de Tarantino” on Friday with a “Kill Bill” double bill (both volumes). As with most Tarantino fare, revenge is the main (only) entree on the menu as “The Bride” looks to get even with her former handler (David Carradine) and fellow female assassins (Daryl Hannah, Viveca Fox and Lucy Liu among the lot). If you’re thinking “Fox Force Five” from “Pulp Fiction,” you’re on to something. QT regular Michael Madsen’s in the mix too, delivering his slovenly, aw-shucks, bad-assed best.

On Saturday the Brattle packages up Tarantino’s Spaghetti Western influenced films “The Hateful Eight” (2015) and “Django Unchained” (2012) – echoing each other, with black men (Samuel L. Jackson and Jamie Fox) going after their pound of flesh in the Old West or Old South – with the classic B Western, “Sabata” (1969). The film, directed Gianfranco Parolini, stars Lee Van Cleef, the macho performer who made his name as the agent of bad intent in Sergio Leone’s indelible “Man With No Name” trilogy, featuring a very young Clint Eastwood as the anti-hero. The haunting, unforgettable score of Leone’s films was by the legendary Ennio Morricone, who has a small part in the music of “Django” and won an Oscar for scoring “Hateful Eight.” Guns and gruff, witty banter are guaranteed in all three.

Sunday brings us QT’s rescripting of history as a platoon of Jewish soldiers led by Brad Pitt (who co-stars with Leonardo DiCaprio in “Once Upon a Time … in Hollywood”) get their shot at Hitler in “Inglourious Basterds” (2009). The film features a knockout performance by Christoph Waltz as a cruel and sly Nazi (he won an Oscar for his work here, as well as in “Django”) and lush cinematic framing by QT regular Robert Richardson (an Oscar winner for his work on “Hateful Eight”). “Basterds” gets a double bill with “The Devil’s Brigade” (1968), a fictional account of the 1st Special Service Force (what would become Special Forces) during World War II. William Holden plays the real-life Col. Robert T. Frederick, and Cliff Robertson co-stars.

Monday marks a bit of a dial back to Tarantino’s video store clerk days with two 1960s rarities: Jacques Demy’s first and only American film, “Model Shop” (1969) a sleazy backlot tour of Hollywood (and influence on “Once Upon a Time … in Hollywood”?) starring Gary Lockwood, of “2001: A Space Odyssey” fame; and “Pretty Poison” (1968) starring Tuesday Weld on a secret (Fox Force Five?) mission with Anthony Perkins – not playing against type – as a recently paroled psych-ward patient.