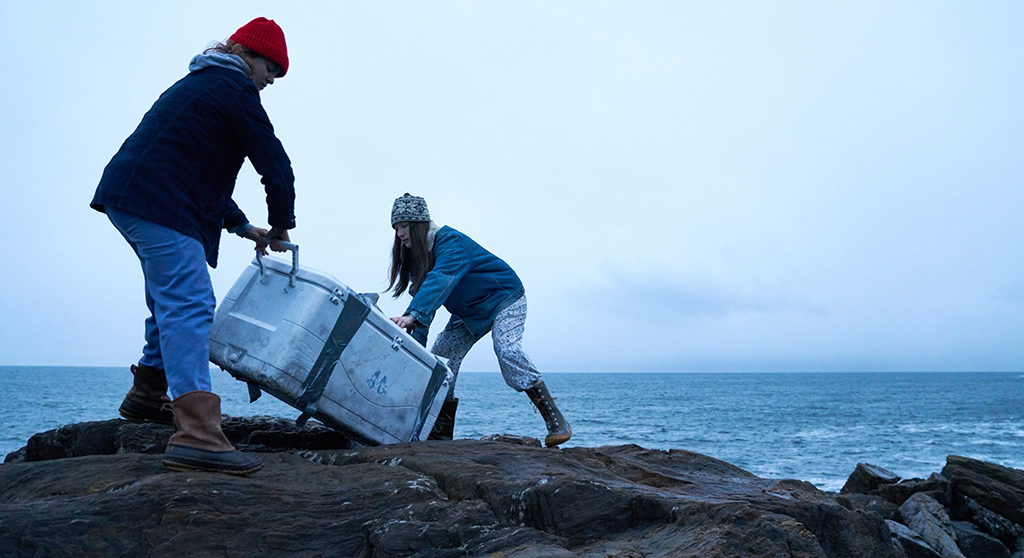 “Blow the Man Down” is something of a noirish whodunnit set in a sleepy little fishing village in Maine by the name of Easter Cove. In look and feel Easter Cove has the small-town intimacy that buoyed “Manchester by the Sea” (2016), but the plot that unfurls upon its docks, dark country roads and placid bays is something else, far darker and more akin to a Coen brothers offering – say “Blood Simple” (1984) or “Fargo” (1996).

The movie begins with the funeral of Mary Margaret Connolly, whom we quickly learn has left her two daughters with a meager fish market, the house they grew up in and a mountain of debt. Mary Beth (Morgan Saylor of “Homeland”), the sassier, redheaded younger of the two, had to drop out of college to help care for her mother, while Pris (Sophie Lowe), the dutiful one, pretty much lives up to her overtly wholesome name. Later that night, to drown her miseries, Mary Beth takes up a stool at the local watering hole and ends up throwing back a few pints with a dubious yet good-looking ruffian named Gorski (Ebon Moss-Bachrach). The two share a few snorts of coke, a car crash into a cherished town landmark – and then there’s the discovery of human hair and blood in the trunk of an old beater as the evening takes some very fateful turns. After it all, there are two bodies floating in the harbor, with Mary Beth and Pris both victims as well as in power to provide the police with details, though the police in this case are totally out in left field and no one is interested in them solving the crimes, let alone the fact that the police chief (Skipp Sudduth) is corrupt and on the take. A critical bag of cash and scrimshaw knife bob around as well.

The film, directed by the first-time tandem of Bridget Savage Cole and Danielle Krudy, is driven by the kind of female outside-the-law energy that propelled “Thelma and Louise” (1991) and is further embossed by the women dominating the ensemble beyond the Connollys (Saylor and Lowe form a palpable sisterhood invaluable to the film’s success). That includes the intimidating Enid Nora Devlin (Margo Martindale, so perfectly unassuming at first), who runs the Oceanview Inn, your classic New England quaint spot that’s a veneer for bordello operations, and a moralistic trio of harpies (June Squibb of “Nebraska,” Marceline Hugot and Annette O’Toole) at odds with Enid and all having something to do with the Connolly matriarch back in the day. Not to mention, the most at stake in the ever-shifting tides of Easter Cove is Alexis (Gayle Rankin), one of Enid’s girls who’s always looking over her shoulder – and with just cause. The score by Jordan Dykstra and Brian McOmber is sets the mood well, and there’s a reoccurring chorus of fisherman singing sea shanties that comment on the action. It’s a worthy little thriller that hits some swells of credibility here and there, but overall the ebb and flow holds us captive.